The book is not really about running.  People looking for a training plan or a dietary supplement guide are going to be sorely disappointed.  But A Marathon Odyssey does follow Malcolm's adventure as he runs three separate marathons in two months time.  Starting with the Athens Marathon on November 5, 2006, Malcolm then travels to run the Caymans Island Marathon on December 3rd, culminating not only with the Disney Marathon on January 7th, 2007.

What makes the book good, and  it is good, is Malcolm's writing style.  He has a rather good talent at turning a phrase and when you might be tempted to let your eyes glaze over a bit and skip ahead (it is 394 pages long, but the pages are small), you would be wise not to do so as each paragraph usually has a tongue-in-cheek witticism hidden somewhere in it.

I met Malcolm at the Cayman Islands Marathon so I most enjoyed reading his recap of that particular day and what he experienced there. 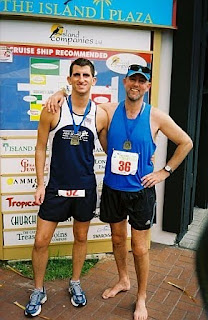 "The sun has sapped all my energy...But I'm not the only one.  Other runners are clearly experiencing similar wonderful feelings.  Incredibly, I pass two runners, who must, given my speed, be running backwards."


However, reading his journey at both Athens and Disney are not lessened any by having not run those exact races when he did (although while he ended his odyssey at Disney, I started my own there a year previously.)  If anything, it made me want to tackle the Athens Marathon even more than I already do.

Is this the best book ever written?  Far from it.  Then again, neither is See Dane Run.  But it is an enjoyable tale told by a guy who wanted to tackle something different.  He wasn't an overly obese person who turned his life around by putting on a pair of shoes.  Rather, he was a guy who had some problems with his legs, thought taking on a challenge would be good for his soul and went it did it.

There is something to be said for that drive and one can only hope we all do the same someday.