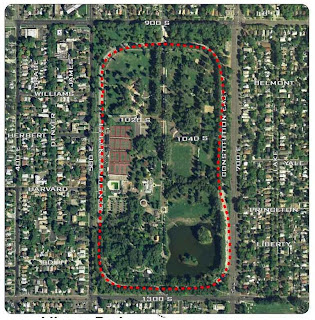 I mentioned the other day how I was disappointed about not being able to do a 12 hour run in Wyoming on NYE and how instead I was planning to do a Beat The Clock 5k at 11:30 PM.  I did not, however, state I would try to make up for not being able to do that 12 Hour Run, which I was using as training purposes for my 204 miler in April, by staging my own mini-version and doing a 6 hour run.  And where would I be doing this run?  At Liberty Park, of course!
I constantly mention Liberty Park in my writings and the reason is simple.  I run hundreds upon hundreds of miles around that 1.5 mile loop.  It is convenient being across the street from my house, it is measured, and it is relatively traffic free.  Just at the top and the bottom of the loop do you have to look for drivers coming into the entrances and exits. 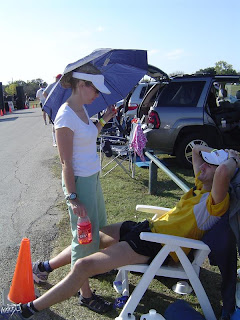 My format for the day is to run for 2 hours of the loop, which I figure will be approximately 15 miles, go home, shower, grab a quick bit to eat and a change of clothes, and then go do the same thing two more times. Six hours of running (give or take) with two 30 minute breaks, so to speak.  The point of the breaks is to simulate what will happen in my 204 miler when I will take a short nap or rest and then be forced to get moving again.  Ultramarathoners often talk about "avoiding the chair" as the wonderfulness of sitting sometimes overcomes any desire to continue running.  I can attest to this from personal experience.
But, when you plan to more or less run for 48 straight hours (or more) rest is inevitable.  So I am trying to mimic that rest but in a smaller scale. The question that then came to my mind was whether this would be one long run or three medium long runs.  Do the "breaks" constitute a stoppage of one run and the beginning of the other?  Or does the shower and the change of clothes denote that?  As with many things in the running world it is open to debate (and also, far from earth-shattering but this is just one of the things which will occupy your mind when you are running for hours!) 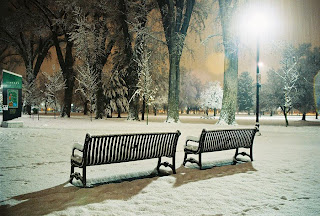 I came to the conclusion that it just one long run.  The time limit has been set and whatever I do in that time limit is up to me.  The breaks will be relatively short and I have no doubt will be just long enough for me to throw clothes in the dryer, shower, eat, relube and get ready to run again.  And as bad as this sounds, I am rather looking forward to it.  And while the temperatures have been quite chilly here lately, the next few days forecast for snow.  Sure that will make the footing a little more slick but the cloud cover should keep the temperature near freezing, instead of 13 degrees which I have run in the last few days and nights.


There is no race per se as no one else will be running with me, although I welcome anyone in the SLC area to come down and run. I plan on starting my first loop at 9 AM on December 31st. IF you don't get there right away, don't worry. It won't be hard to find me. Stand in one spot and within 12 minutes I will be there again.

I will then, of course, get a few hours of rest before I run a 5k race right before midnight. This will be a true test of my recoverability (yep, I made that word up) and I also intend to win the award for "coldest runner". Stay tuned for that!

Regardless of your own New Year's Eve plans, here is hoping you take 2009 out with a band and prepare yourself to take on 2010 with a full head of steam. Don't just set goals but achieve them!
Posted by Dane at 12:51 PM

Sounds like a good plan, Dane! I'm glad you are giving this training thing a real try! :) I'm proud of you. Good luck!!

Head in the Clouds said...

Dane, you have been an inspiration. I qualified for Boston this year at Philly and reading your experiences was integral to my success!

I don't know why, but as soon as I finish a run and shower, I've always felt like I wanted to go back out running again. But I just never seem to have the time (and usually have very tired legs). So what you're doing here is something that I would love to try one day (just not any day soon).

As for you beating the clock, Im running a 5K in Philly (right on boat house row) with the gun going off as the clock changes. After getting into running in the later half of 2009, 2010 will be a year of many running firsts. So what better way to start it off with a race at midnight!

Have a great run! Love Liberty Park! My wife and I honeymooned in the area and loved going there. The aviary is so cool!

Great plan.
Sometimes I wish I lived in a more populated area to get to more organized events like this.

hope to see you!

Drop me an email. Love to hear from you.

George, It is going to be a challenge!

Chad, Organized events? It is a solo run.