First, at the Mississippi Blues Marathon, I will be once again acting as the Charity Chaser wherein I will track down as many participants as possible to raise money for marathon-affiliated charities and organizations.  Starting dead last, long after every other runner has gone,  I will attempt to pass as many runners as possible with each runner representing a dollar amount.  The people at the marathon have gone to great lengths to make this race top-notch with the race receiving the Best Schwag Award from Runner's World. On top of that, a hilly and challenging course in 2009 has been modified to take out some of the late mile hills and eliminate some of the less scenic and slightly monotonous sections.  All this will make it that much easier for me to get geared up to run under 3 hours, hopefully putting me in the Top 20 and earning lots of cash for charity! 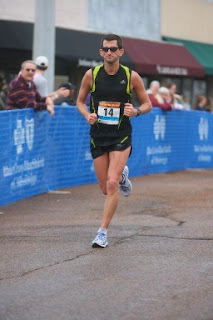 I would be running even faster than "just" a sub-3 if I weren't challenging myself with the double Marathon weekend.  But there is no better place for me to be doing that than at the First Light Marathon in Mobile, AL. What is hard to believe for me is that this will be the first trip to this marathon and to see the people, L'Arche Mobile who I raised all the money for during my 52 Marathons in 52 weekends in FOUR years! 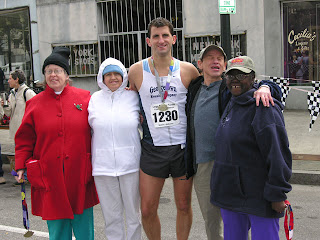 How is that possible?  How did my march from marathon novice to marathon aficionado start four whole years ago?  It is amazing how quickly time flies but I guess if your goal lasts an entire year, that allows for more time to pass more quickly.  In either case, it will be wonderful to see all the people at L'Arche Mobile.

A year will start anew, goals which have never been accomplished will hopefully be achieved, memories of the past will undoubtedly be brought to the surface and once again the breath of marathon runners will be followed by the simple left, right, left of footfalls as I push myself to achieve loftier ideals.
Posted by Dane at 10:20 AM