I have written about Dick Beardsley on numerous occasions before (reviewing two different books, one about and one by him here and here.) Ever since first having the pleasure to meet Dick back at the White Rick Marathon in 2006 (number 49 of 52 marathons for me that year) I have met and spoken to him a plethora of times.  I was fortunate enough to be humbled by Dick writing the foreword for my book, See Dane Run - a dream come true for a first time author writing about running.


However, today I am pleased to bring you an interview with the man himself.  If you don't know who Dick Beardsley is, I have to admit I am curious why you are even reading my blog.  But fortunately for you, the internet is vast and wide and you can do a quick brush up HERE on him. In the interim, I can say that besides being one of the fastest American marathoners ever, he is an inexplicably nice man and just an absolute tribute to the human race.  If I can be so bold as to call him a friend, it means I have done all right with my time on this planet.

Without further ado, my interview with Dick:


Many athletes give up their sport when they are no longer at their peak. What continues to drive you when you no longer are close to setting new world records?

I can't even dream 2:08 marathons anymore but I still love competing and the training that goes along with it! Even though the times are much slower, the effort is still there!

You often begin your speeches with words akin to “I’m Dick Beardsley and I am a drug addict”.  Can you explain why?

I only do that when I'm speaking before an audience at a drug treatment facility. It goes back to the day when I was in treatment (1997) when we would get together in our groups we would go around the room and introduce ourselves with what type of addiction we had. Saying it when I speak at a treatment facility puts everyone at ease as we are all in the same boat!

While your recent knee replacement set you back some in your running, it appears you are doing quite well.  What advice do you have for others dealing with chronic injuries?

With my total knee replacement, I was told by my doctor that I shouldn't run on it because it may wear out sooner. I figured it was worth the chance and I run different than most people. I've always run up on the balls of my feet which acts like a spring and less impact into the knees. Depending on what the chronic injury is, it’s best to speak with a sports medicine doctor and let them know you still want to run. Sometimes that means you have to cut back, don't race, or even choose some other type of sport like cycling to stay in shape.

By finishing second to Alberto Salazar, you became one of the most famous “first losers” in the history of sports.  Do you think your life would have been significantly different if you had won Boston on that day in 1982? 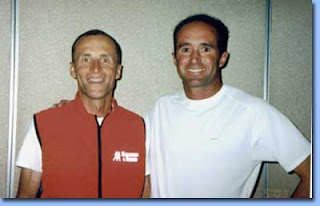 I think most people would have forgotten about it by now. I think because it was a race with two young Americans going head to head from start to finish and then it coming down to a 100 meter sprint at the end makes that race so enduring.

Did you have any particular running idols growing up, famous or local?

When I really started getting into running Bill Rodgers was definitely my idol! We have now been good friend for almost 30 years now!

American elite running, especially in the distance events, has experienced a resurgence in the past few years.  To what do you attribute that?

I was fortunate to be on this Olympic Training Program back in the early 80's, they tested us about 4 times/year, they kept telling us we did not need to be doing the high mileage (140 mpw) that 80-90 mpw and we would still be able to run sub 2:10. I never believed it nor did anyone else at that time and we sure weren't going to change what had been working for us! But that next generation that came along I think bought into it and looked what happened! Now guys like Ryan Hall and Meb are doing the type of training we were doing 25-30 years ago. It's what the East African runners have always been doing.

An American, Chris Raabe, won Grandma’s Marathon for the first time in 14 years in 2009.  However, his effort, while stellar (2:15) was nowhere close to your course record (2:09:37) set nearly three decades ago.  With such a sparkling reputation to bring in top runners, why aren’t there faster times at Grandma’s?

Anytime you get a race where times are 2:09 or faster, everything has to click, the weather, competition, course, etc. In 1981 we had perfect conditions! Cloudy skies, no wind, a little mist and fog rolling in off of Lake Superior, plus there was Garry Bjourklund in the race which made sure the pace we set out was a fast one. A few years ago they had that perfect day with exceptional runners. They were below course record pace for 20 miles. Many really good runners can run that type of pace for 20; its holding onto it those last 6.2 miles is the tough part! That year the winner ran 2:10:57, the third fastest time ever at Grandma's! One of these days everything will come together and a new men's course record will be set, I hope I'm the first person that get to shake his hand and congratulate them! 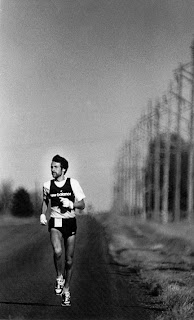 You have recently moved to Austin from your home state of Minnesota.  How would you compare the two running scenes?

I've lived in Austin for 3 years now and I love it! Austin is crazy with runners, but so is Minnesota! They both have great trail systems and have lots of races. The weather is of course much different! Where I lived in Minnesota (Detroit Lakes in NW Minn.) there were many, many days when I was out running and it was 40 below or more, here in Austin we have many summer days of over 100 degrees. The neat thing is our bodies being able to adapt to either situation!

Do you feel the marathon world record will ever get under 2 hours?

I get asked that question a lot and I just don't see it happening, at least not in my lifetime, even if I live to be 100!

What have been some of the biggest strides forward in terms of advancing elite running since you competed internationally?

I think the money! Be it from winning prize money, appearance fees, and shoe company contracts, elite runners today can devote all of their time to training. Today they are professional athletes and I think it will only get better and better!

To learn even more about Dick, please visit his website here. Also, if you ever get the chance, do yourself a big favor and say hello.  You will be glad you did.
Posted by Dane at 2:00 AM