"The Longest Race" - A Book Review

Ed Ayres' latest book is called The Longest Race (subtitled: A Lifelong Runner, an Iconic Ultramarathon, and the Case for Human Endurance.) I was fortunate enough to receive a signed copy from Mr. Ayres and on a long plane ride from Portland to Miami read it cover to cover.  The book is basically a race recap.  Well, two to be exact.  The first race recap is about the 2001 JFK 50 mile race.  The second is about the human race. 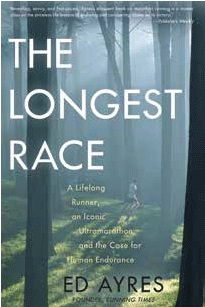 Ed is probably best known as the founding editor and publisher of Running Times magazine.  He also won the JFK 50 mile race outright in a time of 6:04 back in 1977, a time which was hardly topped for the next three decades. He sorta has some running chops, so to speak.

The book is loosely centered around the 40th running of the JFK 50 miler where in November 2001, at age 60, Ayres returned to see if he could break the race’s 60–69 age group record. Spoiler alert: He did - lopping over twenty minutes off the previous best. However, that is incidental to the rest of the book.  In fact, if you blink you will miss Ed mentioning he had done so.

When I say the book is a recap of the human race, it delves into other aspects of running and how we have humans have become who we are as a species. I thoroughly enjoyed references to the Tarahumara, the supposedly “hidden tribe” mentioned in the book by Christopher McDougall. Hardly too hidden if Running Times was writing articles about them in 1977, it made me chuckle to think that this might have been a slight dig at McDougall’s book. But I digress.

Like Born to Run, Ayres culls from the data of 55 years as a competitive road runner to show how he has really delved into the hows and whys of the human race as runners. The science and theory is never overpowering and when we jump back to the JFK 50 mile recap, sprinkled throughout it is almost like “Oh yeah, he was also talking about a race. I wonder how that is going along.” The book could be read as a pretty thorough recap of the JFK 50 mile race itself, without going too much into all the soup to nuts aspect of running it.  But it is so much more than that.

Runners like to think they are a heady bunch.  The reason is, usually, because they tend to be as such.  This book does nothing to dissuade any of those thoughts and really touches on a great deal of points I myself have just really begun to try to tackle.

I think you will thoroughly enjoy it. I give it 4 See Dane Runs.

Thanks Dane - I'll have to check this book out. Good talking with you last Friday at the Expo (I'm the old "walker" guy). Oh yeah, don't forget the JFK did start out as a walking event :)