I am writing about Lance more for me than for you.  Please help yourself if you’d like.  However, this is here so that I can keep myself from yelling at people specifically. It can be a generalized “Are you kidding me?!” instead of calling out Johnny Homemaker and Suzy Triathlete. Basically I am writing down some thoughts to see if they will change over time. I doubt it.

First, as with any high profile person who is accused of a crime or misdeed, until a verdict is reached or insurmountable evidence presented, I do my best to hold my tongue and thoughts upon the conclusion. If anything, I retain that from three years of law school. This is especially true when I am not hearing the facts firsthand but rather reading someone’s view of what may have happened. That is already way too many places removed from the initial story for me to trust my reading of someone else’s recollection. So, until Lance did his dance with the truth, all but admitting to everything which he had been accused of, I held back judgment. No positive test results, no doping. That changes now. He is a doper. 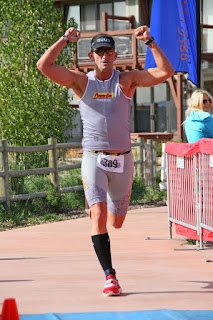 Second, I was asked by a few people if I forgive or could forgive Armstrong. Well, to me, forgiveness matters only if one or more of the people involved care or it affects them. Lance cares not one bit if I forgive him. On the other side, my life is basically unaffected by his lying (unlike some other pro athletes like Lauren Fleshman who writes a great letter here.) So my forgiveness is unnecessary or maybe not even existing given I am not angry at him to begin with. Can you forgive someone you don’t really care about? My triathlon career is just getting started, I don't care much for bike porn, and will never be a huge fan of cycling.

Third, I bristle constantly, even prior to the admission, when people said “But look what good he has done for cancer patients and cancer research.” Talk about incongruous thinking.  If he cheated, and did so vehemently, not caring about whose lives he destroyed in the process, then what he may or may not did for cancer research et.al. has to be balanced against the bad he did elsewhere. You can’t compare cancer research against the hills of France. That is indeed comparing apples and rhinos. If it was just a little doping to win some races against how much good he had done, then maybe the good he did wins out.  But it was so much more.

Fourth, how much he actually has done for cancer research is extremely up in the air. If you don't care to read this article in Outside magazine (it is long), let me boil it down for you: the amount that Livestrong has done for the battle against cancer is not anywhere close to what you may (and I once did) think.

Fifth, for all that is holy please stop saying that you wish to concentrate on the hope he has given cancer patients. I would like to think that positive thinking and hope both help cure cancer but it sure doesn’t look like it has any effect whatsoever. So that is the thinnest of straws to hold onto.

Basically, a myth was created, cultivated, defended, exposed and taken down in a burning blaze. I am not angry as I have no real reason to be. I am disappointed it wasn’t true. I am bummed that another person in a position to do fantastic things is shown to not only be human (seriously, while most of us haven’t lied systematically and unequivocally as Lance has, most of us have never been asked the same question by thousands of people either) but vindictive, narcissistic, egotistical and so much more all without cause.

Is Lance sorry? Probably. I am guessing mostly because he has lost sponsors, cannot participate in sports he loves, got caught and is looking at mountains of legal bills. I don’t think he is sorry he cheated.  Sure it sucks to know that you couldn’t compete and win at your sport unless you were taking drugs and playing the way everyone else in the top echelon was playing.  But lots of things suck in life.

Kind of like Lance Armstrong.
Posted by Dane at 1:45 PM

LiveStrong never did participate in cancer research. What they do is help those in the thick of their battle with cancer, and they're VERY good at that. However, I separate LA from LiveStrong. I believe in the work that LS does, but wholeheartedly believe that LA is a raging ass who's world is crumbling. His lack of faith in anything other than his own heroism and the almight dollar is what brought all of this about.