“Know your enemy and know yourself and you can fight a hundred battles without disaster.” - Sun Tzu

Mr. Sun has said some really wise things that have become part of the lexicon of everyday normal use (I like to pretend he had a boy named Capri, but that is neither here nor there.)  In running, runners will do so much to be prepared for their race such as wearing lucky socks and pinning their bib number on the same way each time. So why is it that so many runners go into their races without more than the basic knowledge of the distance they are going to run (and even that may be a stretch)? 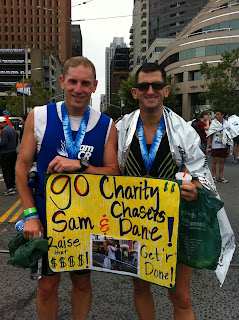 I was once speaking at the San Francisco Marathon expo when I told no less than a dozen runners, who were about take on the half marathon course the next day, what to expect.  Some knew they were crossing the Golden Gate Bridge – and that about exhausted their knowledge of what lay ahead.  In the days prior to the internet this may have been excusable and understandable.  However, today, the race has to be pretty damn obscure for there not to be an elevation chart, detailed map, or some other information that gives you an idea of what to expect.

Then again, as Einstein said, information is not knowledge.  A simple perusal of a race and its comments on-line can give a runner whiplash  when they do a double-take to make sure the runner lambasting a race for one particular feature is talking about the same feature another runner is raving about.  “Hilly”, “scenic”, and “well-supported” are words which, without context, most assuredly mean different things to different runners.  Knowing ahead of time what you are in store for alleviates one of the biggest fears we have: that of the unknown.

When I put together the inaugural Drake Well Marathon in 2006, time constraints and logistical measures kept me from exploring the hills, woods and beautiful homes of my hometown of Titusville, PA (which the course now does, by the way.)  With the initial course being 105.5 laps around my high school’s track, many are heard to groan when thinking about the perceived monotony.  Perhaps monotony could be a problem but there was at least one splendid thing this course offered: no surprises.  No hills popped up at mile 22, no aid stations were out of place, and no one could possibly get lost.  As for mile markers, how does a marker every 400 meters grab ya? 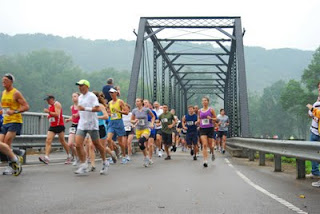 My point is, when the fear of the unknown was removed and runners could concentrate solely on the act of running, so much more was a breeze.  Runners qualified for Boston for the first time, set new personal bests and figured out that knowledge is power.

So, don’t go into your next race without the knowledge that is easily attainable about the course, weather, food and drink available or anything else which may hinder your run.

Isn’t conquering a new personal best hard enough without ignorance slowing you down?