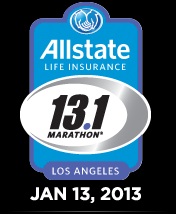 What was said: “Let’s have you run the course of the Allstate Life Insurance 13.1 Marathon® Los Angeles about a month before the race so runners can get a perspective of what the race will be like before they ever sign up.”

This is the third course of the 13.1 series I have lined up to run prior to the race actually being raced by those who registered (hopefully) and trained (hopefully again.) The three courses, (Atlanta and Dallas before this one here in Los Angeles,) could not be more different from each other.  Without a doubt, however, this course has a flavor to it unlike any other.

Starting out in Venice Beach, runners will begin a mile of running down the oh-so-famous Venice Beach boardwalk. Whether you have ever been to Venice Beach or not, you have undoubtedly seen it in movies or television. For me, my first memory of Venice will be Chevy Chase in "Fletch" roller skating down the boardwalk. 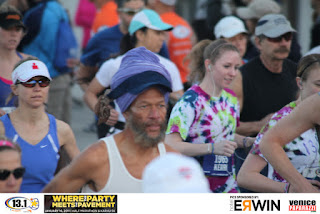 It is not without reason that one of the postcards promoting the 13.1 race in Los Angeles prominently displays famed street performer Harry Perry, adorned in his usual garb, but with a race number attached.

Filled with characters that no movie could invent and have audiences believe, Venice Beach has been a staple for counter-culture since counter-culture existed.  Jim Morrison and the Doors then; ridiculous amounts of “medical marijuana” bandied around now. Musicians of all types, lively locals, people with monkeys, people who are stranger than people with monkeys and more than the occasional celebrity sighting abound.

There is sand to your right. There are a plethora of stores with every possible garment and concoction you could possible imagine on your left. The sun is kissing your skin and the salty breeze from the Pacific Ocean fills your nose.  By the way, you haven’t even gone one mile yet.  Or made your first turn. 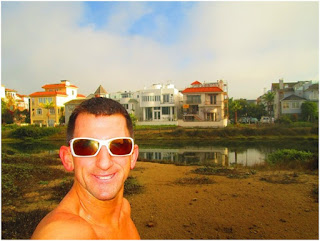 When you finally do make a turn, it is to run along the area of the city made to look like its namesake in Italy, the Venice Canals. These beautiful homes of varying styles and shapes, nestled against the canal make for a wonderful backdrop which could not be more different than the boardwalk you just left seconds ago. Opulence and wealth, fit in so comfortably with the airy still-prevalent hippie and carefree lifestyle feel.

Busting out of the canals, the next three miles take runners on a circumnavigation of Marina Del Rey. Rarely leaving sight of the marina, with hundreds of masts of ships just off to your side, there is always a reminder the nautical nature of this area of Los Angeles.  Up to this point, while the course has been relatively flat, there has been juuuust enough elevation change every once in awhile to give your legs the slightest bit of break. 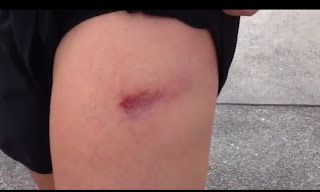 In addition, as you will be running on a cordoned off street you will not do something idiotic like I did and run quadriceps-muscle first into a fire-hydrant.  (In my defense, given I was being filmed by two guys on a tandem bicycle, I was watching the traffic and potholes for them and not watching my own path. Let’s just say running 11 miles after you take yourself out with hardened steel is not an easy task.)

The next six miles of the course is simply fantastic. You begin with the type of running one would wish to have for a race in the land of beaches and it does not disappoint. After leaving Marina Del Rey, you run down the Ballona Creek Bike Path and onto the Ballona Creek Bridge to cross the, wait for it, Ballona Creek!

First up for runners after crossing the bridge is Lagoon Park and the first glimpses of the beautiful beaches that will comprise the remainder of your course. Winding along the bike path, the Pacific Ocean is now so close you can almost reach out and touch it. A gorgeously manicured beach, seemingly bereft of any sunbathers most of the time, looks like it was made just for this race. A small cliff wall off to your left separates the beach from Vista Del Mar and those lucky enough to have a house on the cliff overlooking the ocean. 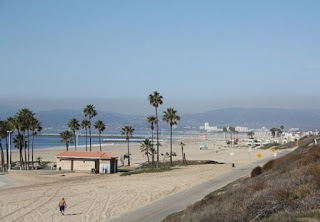 Next up is Dockweiler Beach State Park where you begin the only thing that can be considered a climb for the remainder of the race. A mere thirty feet of upward motion over the next mile or so is done not only gradually but in a series of steps.  You will be hard-pressed to even notice the difference as the planes from LAX periodically take off overhead. If the morning fog is hanging low, as it often is, the planes are obscured enough that only the noise of their departure will be present.  It is as if the airport is serenading you as the revelry of engines emanates from the sky every half mile or so (pace dependent, of course.)

Before much longer you find yourself turning around to head back to the finish.  With barely a 5k to go you will be able to see the runners behind you on the bike path going to the exact place you just came from.  Entertainment on the course is in full force for these last six miles with bands aplenty to help entertain you - just in case, you know, the scenery, perfect weather and fast course are not enough. 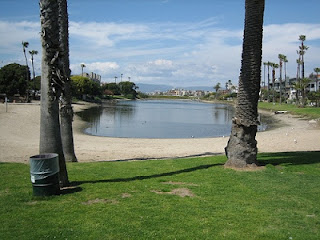 The finish takes you right near the Del Rey Lagoon along the beach. The finish line will be festooned with a variety of foods and drinks to help those who have conquered their race kick back and enjoy the beach and revel in their accomplishments.

As with every one of the races that I have run (and there have been many) created by the people at US Road Sports, this promises to be a top-notch first-rate event. Sure to produce fast times, I think you will be far more delighted running the course on race day than I was routing this course for you and I had a blast!
Best of luck!