In a little over a month I will be participating in the Fuego Y Agua 25k race in Nicaragua. Going all the way to Central America to race 15.5 miles seems a little odd for most people. However, given how awesome and unique this race is, (helping out the local communities as well as running on a volcanic island) it makes a little more sense why I am going.  Yet, there is another reason.

When I ran my 52 marathons in 2006 I scoured available resources to find all marathons run in order to make sure I hit an actual race every single weekend.  I became a student of the sport and tried to learn as much as I could from as many people as possible who knew infinite amounts more about running than I did. A bit of a geography nerd (which I devote a chapter to in my new book,) I was often drawn to the idea of running from places of significance to other places of significance. One area intrigued me greatly and I was surprised that I could not find a race that traversed the course I felt was a natural fit.

As the years have gone by, I have learned that often when I want to run somewhere, it is far easier not to wait for an actual race but to go and simply run there. While I love “racing” I very much love “running” – there is a significant difference, which I plan to explore in a future article. As such, knowing about this race in Nicaragua, I finally saw the opportunity to combine an excellent adventure with a years-old dream: 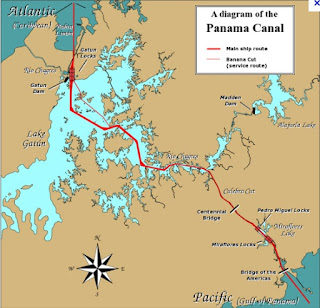 So, a few days after finishing the Fuego I will drive down to Panama. As the morning sun breaks in the city of Colon, I will begin running from the shores of the Atlantic Ocean (Caribbean Sea, really) and hopefully before the sun sets, will be dipping my toes in the Pacific in Panama City. Following the actual canal is, for all intents and purposes, impossible, but I will be running alongside of it for as much as I can.  Relatively speaking it is not that far of a distance.  But the iconic nature of running across one of the most marvelous and dangerous undertakings in the 20th century is enough to get me giddy.

I am presently trying to figure out how I can have people track my progress as I have zero intention of using my own phone and paying $5000 in roaming charges. However, I will be checking in when I can and taking oodles of pictures along the way.

Good luck! You are starting to sound like the more mature runners I know - who, love to race at times, but are now just running races to run in different states, countries or on different continents!