This is not a recap of the Million Dollar Marathon as it is only in its 4th of 41 planned days of running from the Pacific Ocean to the Atlantic Ocean. (Read my blog describing more about the MDM.)  It is not even a recap of my participation per se.  (I basically ran 13.5 miles in about 1:45.) It is, rather, a recap of the events, people and day I spent with what is an extraordinary group of people and a fantastic mission all put on by Above + Beyond Cancer.

My small participation on this thousands of miles of journeying did make me laugh, however. I was scheduled to run a portion on the town of Enumclaw, WA.  This town so happens to be the place where I participated in the National Duathlon Championship just a few weeks ago.  While that was rather ironic, the coincidence sandwich was best served when I realized that my particular leg of running would take me up the big hill which comprised the bike portion of the duathlon.  I have now done two events in Enumclaw, WA and know one road. 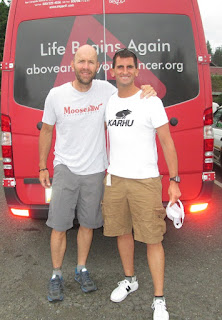 The night before my run, I ventured up to the greater Seattle area and met a kindred spirit in the name of Steve Cannon.  Steve is the brainchild behind the Million Dollar Marathon. Last year, Steve ran around Lake Michigan- 1,037 miles, in 40 days to raise money for cancer research.

We instantly bonded when we first started talking a few weeks ago but meeting him in person for the first time was like seeing a long-lost brother. Steve was herding cats as he tried to get runners, film crew, support vehicles and everything all working smoothly.  Only two days into this adventure and there had been inevitable but still frustrating setbacks. Nevertheless, Steve was calm and knew it would all start flowing in just a few days. People would find their roles and everything would simply gel.

It is roles that will define this run. Dr. Dick Deming and Charlie Wittmack are the founders of Above + Beyond Cancer and boh were on hand during the run.  Dr. Deming will appear numerous times throughout the run, running 26.2 miles each time, fitting it in between a busy life wrapped around fighting and curing cancer.  Charlie, an avid adventurer in his own right with summits of Mt. Everest under his belt, will be along side the MDM every step of the way. In the discussions between us on the road during my short time with these gentlemen the talk of what our "cancer connection" was came up. While there was more readily apparent through loved ones, I was given a bit of a pause.  Absolutely I had lost friends and family members to the disease.  But my thought process went a little broader.  What is my connection? Well, I'm alive. I'm human. That is my connection.  One doesn't have to be immediately affected by cancer to want to eradicate it. As Charlie said to me, if you haven't been affected by cancer yet, you will. 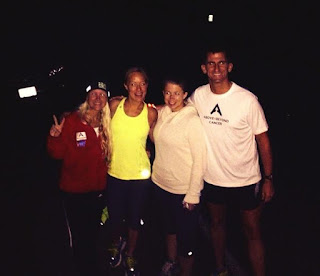 I started the morning with a group of ladies (and one gentleman) who would be running one of the longest
days of the entire trip up and over mountains. Keena and Renae were seasoned runners while Keena's boyfriend Andrew was self-described as a cyclist. Jennifer would be running her first run ever over 18 miles.  Our start time at 4 a.m. was ridiculously early for a night owl like me but in order to assure the run of 114 miles with oodles of climbing in the mountains was completed in time an early start was necessary.

The group was amazingly upbeat and awake from the interns for Above + Beyond Cancer to my friend Amanda Krenz from ABC 5 in Des Moines (where Above + Beyond is located) to Steve himself who, with virtually no sleep in the past few days came out to cheer me anf the rest of us on as we started. It think it is very much imperative that my morning face could not be seen in the dark video he shot.

My run and involvement were just a drop in the bucket of this entire excursion.  However, I was quite moved by the people involved and the organization itself.  From a logistical stand point I could appreciate all the moving parts and what is needed to get an endeavor like this underway.

When I ran my 350 miler along the coast of Oregon last year, I knew I could not have done it without the unbelievable support of my awesome friend Shannon Mitchel. A ultra running doctor, she basically kept me fed and moving with no thought needed from me on a daily basis. I look back and see how much she did for me, just one runner, and cannot help to be awed by that effort.  Now to think about multiple runners, changing daily, from multiple locations, who often meet for the first time minutes before they run and the logistics of MDM make my head spin.

However, having met who is in charge and who is running, both literally and figuratively, this operation, I have no concern whatsoever that endeavor will be an enormous success.

(If you are still looking to help the cause or are wanting to join the run, please go to http://coasttocoastforcancer.org/)

Email ThisBlogThis!Share to TwitterShare to FacebookShare to Pinterest
Labels: Above + Beyond Cancer, Dane Rauschenberg