I have a feeling that is what my legs are going to say this weekend. Granted I have run two technical and challenges 50ks this year but I haven't run a marathon race since...are you kidding me?! 7 months ago? 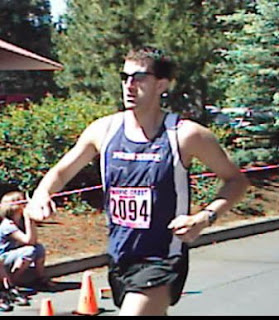 This weekend I head to the Pacific Crest Marathon in Sunriver, Oregon. This was one of the 52 Marathons I did back in 2006, sandwiched in between Estes Park and Leadville Marathons. I knew how challenging the two in Colorado would be for a flatlander like myself but I never knew that parts of Oregon were so high as well. In fact, I thought of Oregon the way most (ignorantly) think of Oregon - constantly raining and green to the hilt. (Seriously - if you think it rains in Portland all the time, just use this little tool to test it against your favorite city of choice. Go ahead.  I'll wait.)

For many reasons, Pacific Crest remains one of my favorite marathons and one I was most proud of.  To somehow run a 3:16 the week after Estes Park, knowing I had 27 more marathons to run in a year of completely uncertainty, at elevation, made me very pleased.

I now face uncertainty as well.  How will my body react to a marathon, at elevation, after dealing with a bad case of staph infection (MRSA) in my foot in April that basically brought my training to a halt and my health running levels back to zero. Prior to the infection I was in a groove, doing great, running solid times.  Since then, it has been a struggle. With two marathons following this one in quick succession, I am trying to shock my system into learning how to run these 26.2ers again.

Often I am told by well-meaning friends when I voice this concern "Ah, you've run tons of these, you will be fine!"  They don't seem to realize that it does not matter how many marathons you have under your belt - the distance always remains 26.22 miles. It never gets easy. Take it for granted and as Bill Rodgers said, it will humble you.

So I am not taking it for granted. I am actually a little nervous. I like that. I like the butterflies. For whatever reason, the two 50ks I did earlier this year did not give me butterflies.. I knew given the weather or terrain (or both) that they were both going to be slogs.  They weren't going to be things I could race.  Pacific Crest can be those things. The race itself is a beauty in a nice dry climate.  It has potential to be a little warm, but, well, ass recent race weather has sown, so does just about everything else.

Nevertheless, 224 days after my last marathon, the longest I have gone in between marathons since the time between my 2nd and 3rd ever, I will take on this challenge again.