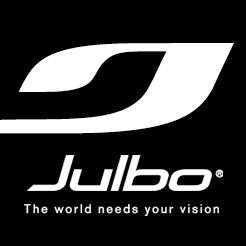 Was told recently I am getting known for my trademark sunglasses. I was hoping it was for my soulful piercing green eyes or granite-like quadriceps but apparently it is for something which covers my face. Better Julbo.(I wrote about partnering with them last year here.) Given how much I love these sunglasses, I figured I should give a review on at leas ta few of the pairs that I wear.
than nothing, right? The sunglasses in particular (not specifically because I wear about 12 different styles) all come from the fantastic company called

Purely by accident, I have seemed to have worn these particular sunglasses the most in my races.  Perhaps it is not an accident then considering how much I do like them. In fact, they seem to be everyone else's favorite as well as I have never received as many "Hey, nice sunglasses!" as I have when I am wearing the Dust. The coloring definitely helps as the neon green on the arm/temple really pops off the powder blue. (N.B. As with all the sunglasses I am showing you, my selection of colors is just one of many different color selections you can choose.) 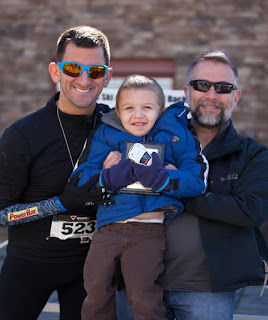 I thought the straight back styling of the arm would mean the sunnies would slip but I have never once had them move in a race. In fact, the slight curvature near the end makes them hardly any different than conventional sunglasses. The lack of any part of a bottom rim has almost always been essential for me for a pair of active sunglasses and the Dust is no different. While the thicker temple takes away just a hair of peripheral vision if you are REALLY looking for it, the appearance that it might is far greater than what happens in actuality.

The nosepad is one solid piece of curved softness that rests perfectly on my nose.  It sits just high enough to allow ventilation and keep the sunglasses from fogging up.

Seriously top notch all around. 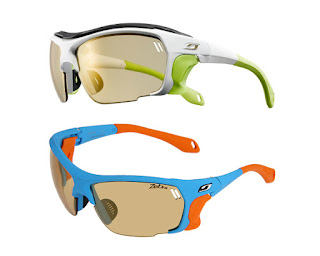 The Trek is not normally a running sunglass (that's singular, right?) but I was very curious about it and wanted to try it out.  More reserved for mountaineering and climbing, It doesn't necessarily ride as well as other sunglasses in the Julbo family. That doesn't mean it doesn't still perform quite excellently. It does.

I am showing you two different color types to show you how different each pair can look simply with a different scheme. Also, I wanted to touch on what I call the sweat bumper which you can see in the white and green model. A removable piece of foam, it not only helps the glasses fit a little more snugly on your face, it helps to keep sweat from running into your eyes.

Also removable all the side shields (pictured as orange and green above) which I personally have never felt the need to remove. But if you needed a little more ventilation, then by all means go right ahead. 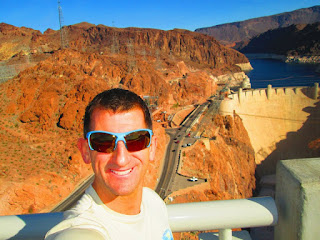 I have worn these in more races than I initially thought I did which goes to show you that they obviously perform better than my initials thoughts. Reviewing pictures of me in the glasses I saw shots of me all over the country but this one really stood out.  This is obviously after Superman fixed it back in 1978. (Sidenote: Remember back in the early 80s when the networks would randomly decide to show some movie like Superman? For those of us with basic cable this was like hitting the jackpot.  But I digress.) 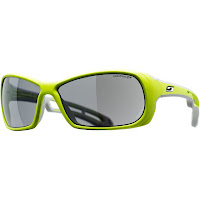 When I originally saw the Swell sunnies I figured I would not like then for running.  For just chillin' out maxin' relaxin' all cool I knew they would be stunners.  But the bottom portion of the lens had a frame and I have always felt those were far too bulky and blocking for me to find suitable for races.  Then I found myself wearing them on more and more training runs.  They simply felt good.

I haven't taken them to what many would consider the ultimate test yet: a race. But to me, wearing them daily has shown to me they would very easily make that transition.  With a smaller lens then other sunglasses, they don't provide the same field of vision but I never felt like my eyesight was stunted. Also, the nose piece was not a full wrap around like in the Dust and therefore, even though they seemed to hug the face a bit more, that allowed for ventilation that might not otherwise happen.  You would not be disappointed with these, I can assure you.

These definitely fall into the category of glasses I would originally think were much more about fashion than form. Pretty funky fashion that is too. I remember reading another review of these sunglasses that said "I don't think I am edgy enough for these" and I agreed at first.  I am not one for mohawks or flashy clothing or sports that either accentuate or reward either.  So I thought I would look like a doofus in the Pipeline. Well, I might look like a doofus but it is not because of the things on my face.

I used to never give much thought to sunglasses given how how little I paid for them and how frequently I lost or broke them.  Now I pick up a pair like the Pipeline and immediately notice things like how the nosepiece is different from all the others I have already reviewed.  It is smaller and sleaker and I then wonder if it is
going to hurt. Also, I wondered if those big honkin' arms would wear on my ears after a while. Well, neither happened.  In fact, the accents are rubberized and feel quite nice even if you have been wearing them for hours. Furthermore, if you are moving along at a nice clip the holes in the arms actually create a nice little breeze zipping in from the side to col you temples a bit. That was a pleasant surprise. 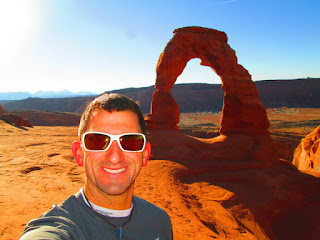 I tend to wear these more for just fashion that racing or running but when I decide to throw them on, they always perform just right. Another set of wide lenses allows for an excellent field of vision.  In addition, the larger than normal frames are actually set off to the sides and never in the way of your eyes.  This surprised me a great deal.

And my pair matches the red rocks of Moab so I have that going for me.

I have this and the next pair for the longest time and they have definitely gotten the most wear testing.

I haven't gotten a scale out to measure any of these sunglasses but I have to say that the Trail are probably Trail Factor 50k and for nearly 5 hours had these babies right on my face.

the lightest pair that Julbo makes.  If they aren't, they still feel like air. A very long, supple nose piece has the setting very kindly on the ole schnoz even if you are running for hours and hours.  I know as I most recently wore them during the 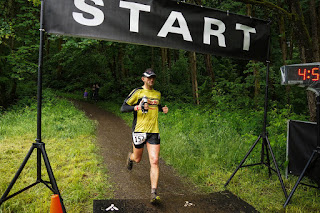 Another set of wide lenses accompany the bottomless frames.  I took countless branches to the face during that Trail Factor race, in pouring rain and they stayed snug on my face.  Very flexible lenses seem to make these things impervious to breakage.  If you treat your sunglasses with reckless abandon, these are definitely ones you are going to want to have on your mug. 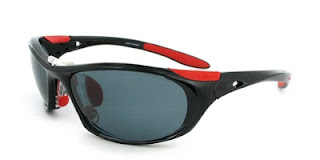 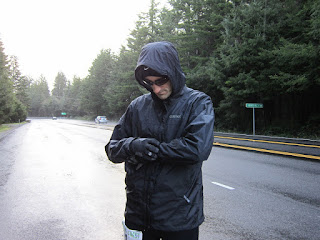 The Race was on my face for more than half of the 350 mile run I did on the Oregon Coast last year. To say they dealt with everything weather-wise during that run might be a bit of an understatement.  When I had them stolen I was more than a bit disappointed. I figured this pair would be with me forever. Alas.

Again, another pair of sunglasses without the bottom portion of the lens being frame-free completely surprised me. They didn't fog, they didn't sit heavily on my cheek and my peripheral vision was not impaired whatsoever.

I keep showing you these sunglasses in less than ideal sunny conditions to prove a point. Sure, they block the sun.  But they also provide excellent vision and eye protection from the rest of the elements as well.  It is a rare run I will venture outside without Julbo on my race.  I have taken far too many twigs to the face, dust in the eyes and everything you can imagine to not want to make sure I am keeping my eyes safe as possible.

Last but certainly not least is another pair of sunglasses that has seen rain, hail, sun and everything in between. Most of that has been in the past few months. To me the Ultra are very similar to the Trail in form and fashion.  The lenses are slightly bigger and swoop back a little bit toward the ears.  For that reason, I thought they would be a better sunglass for cycling and whether that holds any real rhyme or reason, have worn them in more than a few triathlons. 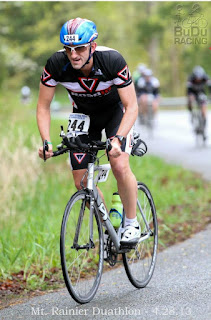 Most recently I used them in the Duathlon National Championship race.  They performed excellently in a day that combined sun with high speeds, wind and rain.  I specifically recall getting a piece of gravel shot up at me as I was trying to pass a cyclist. I felt for sure that the lenses would be broken if not at least scratched. when I finally had a chance to check them out, I saw nothing. I felt for sure they would have taken the brunt of that debris and need some replacing.  Luckily, not only did they not, but my eye was fine as well.

Another set of glasses, another nosepiece. I really liked this one as it was gilled like a fish but still soft on the nose. I also thought the straight back arms would protrude too far back on the skull or possibly not grip the head tight enough.

Julbo comes with a variety of different lenses which I purposefully waited until the end to discuss.  They have the Zebra®, Zebra Light®, Camel®, Octopus® or Falcon® which can all be tested on their website in a cool interactive page.
I personally found it amazing when I would go from dark to light how quickly the lenses would adjust to my surroundings.  In some pictures my sunglasses look like they have no tint at all and in others, if I was getting hit in the face with bright sunlight, they look almost mirrored.

If you haven't gathered, I love these sunglasses. Some more than others, obviously but I wouldn't be working with the company if I did not think they were top notch.  While this review touched on numerous pairs, I didn't even begin to scratch the surface of all the differing ones out there.  In fact, I haven't even had the pleasure to have them all on my face yet. Julbo is not necessarily know as a running sunglass company, more world-famous for adventure sports like skiing and mountain climbing.

However, if you are a runner and are looking for a pair of fantastic sunnies, you are definitely doing yourself a great disservice if you do not try a few of these out.