You have to love NRFs. (That is "Non-Running Friends".)

When I mentioned I would be going to the Prefontaine Classic to a few of my NRFs, they asked me if I would be competing. After my chuckle, not at their ignorance but at the fact that anyone could possibly confuse me for someone with enough speed to be invited to one of the most prestigious track and field events in the country, I told them no. I would, however, only be going for one night of the weekend as I have a prior engagement to race the next day. 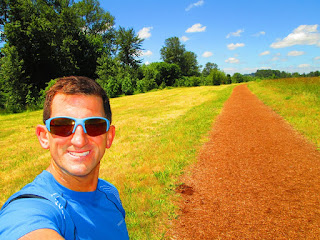 So, I traveled down to Eugene, Oregon and went on a little run. I found myself on Pre's Trail. Although it has been two years since I last set foot on this trail, I am pretty sure I found the exact spot where I captured a picture which graces the back cover of my latest book, 138, 336 Feet to Pure Bliss.

After that, I went and grabbed a quick massage from Terrl lHale, the hand genius of Georgetown Sports Massage.  Terrel kept me on my feet during my 52 Marathons in 2006 and was undenibaly one of the reasons why I stayed healthy that year. Here to work on athletes at the games, whomever was a recipient of his skilled work knows exactly whayt I am talking about .

Best friend Shannon joined me to watch these games which consisted of a veritable who's who compete in a variety of throwing events, the long jump and some long distance running events, all held at historic Hayward Field. This was quite a nice little birthday present I gave to myself. I am not the biggest track nerd in the world so I was happy to have my program to keep track of exactly who the runners were out there all blazin'.

Even more special than just attending, I was granted a media pass to cover some of the athletes and be on the other side of the interviewer's microphone for a change. I spent the greatest amount of time speaking with Galen Rupp.  Here is Galen talking about what it is like to have a training partner such as Mo Farah.

I wasn't nearly as prepared with questions (or recording equipment) to capture all the athletes I wanted to speak to but to say they were accommodating and genial would be an understatement.  Earlier on my run, I was almost sure I had seen Mo Farah out doing a jog. When I asked him a few questions at the meet and greet, he looked at me strangely.  I was wearing the exact same clothing to the interviews that I had while running and he said "Didn't I see you on the bike path?"

It truly is a small world. 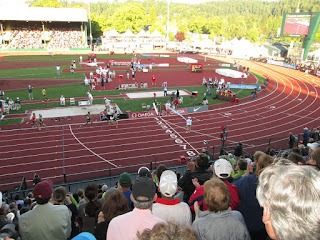 The events themselves did not disappoint even if they did provide some mystery.  In the 1500 to kick things off, there was a great surge by Garret Heath to hold off Jordan Macnamara. Garret's final 400 meters was run in 57.7 which just had me shaking my head.

The mystery though was that of Alan Webb who finished 10th overall in a time of 3:45. I wondered if he was injured or simply out for a training run of sorts. Webb's career is one of the most followed since his high school days and I have always subconsciously rooted for him. Of cource, I can barely dream of running a minute within his time for a 1500 but I am not judging him against me; rather I am judging him against him.  Or at least what he used to be.  I can only hope he gets back there. 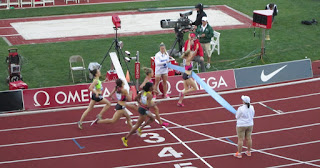 The women's 800 meter was the most closely contested race of the evening with so many ladies vying for the top spot that it was difficult to know who would pull out the victory. Phoebe Wright got the win in 2:00.85. Only Melissa Bishop of Canada kept it from being an all U.S. top three. This was the race I ran the most often in high school (in my very brief track career) so it is the one I most identify with.  Everyone has run a mile but the 800 just speaks to me. I love looking back at what I think is the race which hurts the absolute worst. Nothing made me more ragged than two hard laps around the orange oval.  (Or in the case of our 286 meter cinder track- 2.8 laps around.) 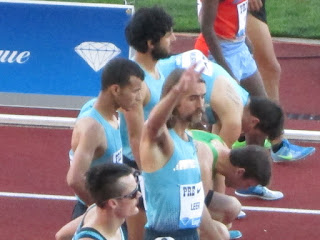 My favorite haircut of the day goes to Will Leer who tied his personal best in the mile by running a 3:56.39.  It was shades of Prefontaine from Leer that had me zooming in on his locks and facial hair. Sweet stache, Will.

Recently graduated high schooler Bernie Montoya "failed" to break 4 minutes in the mile but his 60 second last lap gave him a fantastic 4:01. 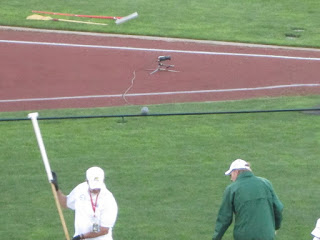 The 10,000 meters gave us time to marvel at the endurance and speed of 22 different athletes all while getting excited for the final rounds of the women's' javelin and shot put.  (I had always wondered how the putters got their shots back and upon seeing the put-return at the field almost squealed like a school girl. Brilliant.)

When Christina Obergfoll of Germany threw a javelin that seemed to get a rocket boost about halfway through, we all wondered if the field could contain it. 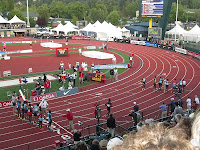 Meanwhile the men in the 10,000 meters circled around and around.  they came down the back straightaway the claps would grow louder and louder. Earlier in the evening, a French movie-making company had asked those at Hayward to recreate a class chant for an upcoming movie about Steve Prefontaine. As we all chanted "Go Pre! Go Pre!" it almost felt like Pre's ghost was heading down the track.  Prefontaine had died 28 years and one day ago at this point. Hard to believe the sway he still holds over so many. But here every time we started clapping for the runners, it almost felt like we were still clapping for Pre.  That's the sort of hold the man has on this place and this sport.

By the time Kenenisa Bekele reasserted himself as the premiere 10,000 meter runner on the planet with the fastest time in the event in 2013, the fans were standing and cheering. It was a bummer to not have Mo Farah in the field (who was a late scratch) but hey I ran with Mo earlier in the day so nuts to the rest of you. 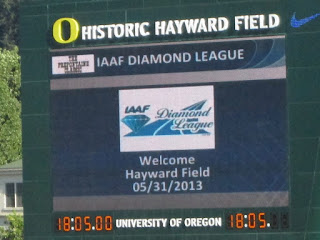 The fact that I almost missed this Classic gnaws at me a bit. I was originally supposed to be out of town for the whole weekend but have had plans change over the past few months, mostly because an infection in my foot changed everything in my life. So while I was in town, I wasn't thinking about the Classic anymore. So to remember in time and scurry down to at least catch this action was definitely pleasing. When I lived in Salt Lake city I bemoaned the fact that I couldn't get to events in Eugene or Portland often enough (re: ever) because of distance.  Now that is no longer an excuse as I live right here. I plan on continuing to make this a habit.

Happy birthday to me.
Posted by Dane at 6:50 PM

I bemoan the fact that I can't get to Portland often enough, too. For 15 years now. Sounds and looks like a great way to spend your birthday. Glad you got to go!