I just ran for 5 consecutive days.

Big deal, right? Well, for me it is. Why? To be honest, I have no idea the last time I ran for 5 consecutive days. It assuredly has not happened in 2007. I know I never topped 3 consecutive days once in 2006. So, to get such a “long” streak, I would have to go back to at least 2005 when I last ran the equivalent of a work week without taking a break. In fact, yesterday, I actually ran twice: once at lunch on the treadmill (something I used to despise but now see as a way to sneak in a few more miles during lunch) and another after I got home from work.

I mention all of this because of my previous blog about training or today’s running society lack of desire to do any of it. You see, it is hard for me to describe how absolutely tired and rundown I felt for the majority of 2006. In spite of recovery time that I never could have expected I would possess (as well as the ability to be semi-competitive in each marathon I ran as the year went on) the fact remained that the regular runs throughout the week were barely more than maintenance miles. I did get one good run in a week when I hit the track with my running club and did some speedwork. I am a big advocate of track speedwork. Flat, fast, and unforgiving. You know where to start and where to stop. The track does not lie.

But for the most part, the runs I did during the week were where I was trying to shake off the previous week’s marathon and get prepped for the next week’s race. I recovered in time each week (for the most part) to run a decent marathon but that was about all I had in me. For example, in November and December, I ran a total of 18 days, half of which were marathons. I was really beginning to wear down from travel, running and life. But I was able to keep pushing out decent times.

My point is, yesterday, in spite of running 5 miles in 32 minutes on the treadmill, I went home and did another 5 miles slightly slower than that on the rolling hills of Custis Trail. This included a last mile at 6:13 which climbs a massively steep hill. (Look below) 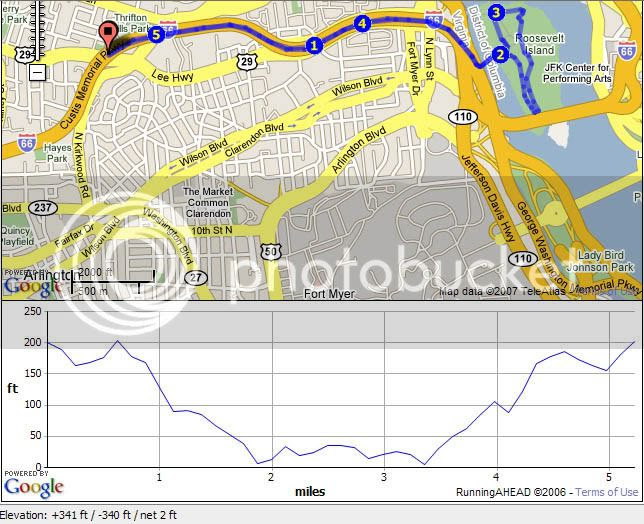 But even with that monster to climb (look at the last mile), I felt good. Really good. I felt like I actually could press myself without fear of injury and still have some energy left in the tank. And given that I had just run two half-marathons and a full in the preceding three weeks, I was hardly AS rested as I wanted to be. Yet it still felt great.

As I have mentioned, I have a goal to beat all of my personal bests this year in every distance (perhaps not the mile. I do not know of too many mile races out there but who knows). I just signed up for a 10k in Arlington in May. Granted, this follows two straight weeks of marathons but I still have a chance to PR in that, I feel.

Now, I know this seems to go against my diatribe of how we don’t like to train and only like to race but believe me, it is vastly different for me. By the second weekend of May last year I was pretty close to running my 20th marathon of the year. So to be only on my 6th race of the year, is, for me, a large step back.

I am truly training again. I am hitting the gym. I have purchased a heavy bag stand for my apartment so I can throw the gloves on and box some. I am doing speedwork that leaves me winded but exhilarated at the same time. I am no longer slogging through workouts just trying to get the miles in. I feel invigorated and why is that? Because I am training for a higher goal. I am training to run faster in the select few races I want to do this year. I am training.

Great entry, Dane. Thanks for the reminder that working hard and even suffering through track workouts can leave you feeling energized after the fact. It has been so long since I was on the track, I'd forgotten!

NYC has a 1-mile road race every September. It's run in heats, so you can truly compete. www.nyrr.org

If it weren't for the fact that I train as hard as I race, I might think you were referring to me. I have heard people in NY talking about the only running they do is racing. It would be nice, but would defeat the purpose for me. I like the challenge of working hard to better my times and I really love the payoff!!

Are you doing Battle of the Boulevard?

Sure am. Blog to come.

I'm thinking about it too. Haven't quite figured out my May schedule though.