What is Trek II?

TREK II East Coast Relay is an 11- day relay run from Boston, MA to West Palm Beach, FL, featuring two teams of 10 runners per team. The event will span 11 days and cover 1,639 miles, ending at the finish line of the Marathon of the Palm Beaches, Meyer Amphitheater, in West Palm Beach, FL. Each runner will run 15-17 miles per day for each of the 11 days.

My good friend Larry Herman (who you might recall is one of the finishers of the Inaugural Drake Well Marathon and an AVID Fiddy2 supporter) will be participating in this great event. Each team will be raising money for its respective charity. Larry's Team (Team DMSE) will be running to raise funds for The DMSE Children's Fitness Foundation. The DMSE Children's Fitness Foundation supports non-profit organizations whose efforts address the epidemic of childhood obesity through youth fitness and medical research programs, uniting the dedication and commitment of those who believe that every child deserves a chance at a healthy future.
As you can imagine, there are few things I would support more than the battle against this horrid problem that is facing America today. I cannot imagine one of the largest, most serious problems ever facing a country would be too MUCH food. But we have it. And we need to fight it.

That said, Team DMSE passed through DC Saturday April 21st and, I was fortunate enough to be asked to join them. I joined them on the outskirts of DC and trotted through our nation's capitol. Unlike them, however, I stopped and went home. (Hey, I have a marathon next weekend in Korea!) But they will march on, all the way to the West Palm Beach, Florida!

Before I continue, if you wish to learn more about this wonderful event, please go here: HERE!

Now on to my experience.

My good friend Kathy was kind enough to drive me to College Park, Maryland where I met Team DMSE to begin running. Given that I was going to go home directly after I finished this point to point run, I could not very well leave my car there. For this Kathy was a doll!

After some navigating and cell phone calls( how in the world did we ever meet anyone before cell phones?!) I turned into the Holiday Inn parking lot just north of the University of MD's campus. I more or less did a drop roll out of Kathy's car and into the swank Blue minivan with "Caution: Runners on Road" emblazoned on the front hood.

Here I got to see Larry for the first time since the Drake Well Marathon. Having just finished one of his two legs for the day I was able to chat with him, a wonderful chap named Bob Myette(with a deep Boston accent- loved it) and the lovely Judith Forman, all members of Team DMSE. Our talk of course turned to running and I let them know that I was seriously considering a vocational career change which would hopefully lead me into the world of competitive athletics. I did not mean so much that I myself would be a competitive athlete (I know my ceiling athletically and while I may be very good someday, chances are I will not be "great") but rather take what I have done and what I have learned and use it to help others train and possibly work hand in hand with some great races nationwide and across the world. With just a few worlds I could see the wheels in motion in Larry's mind.( With such a dull expression on his face, any thought registers on Larry's face. I KEEED!!!)

Before long, I found out I was going to be taking another stop drop and roll out of The Hotness Mobile and joining Ray Regan and Adam Batliner, two Team DMSEers who were already about 2 miles into their leg right outside of DC. Spotting the dynamic duo, I struggled mightily trying to open the van door until I was told that the door will not open unless the van is in park and I push a button to open it automatically. Ah the conveniences of modern day life!

Finally at a stop, I bid adieu to my vanmates and caught Ray and Adam. I quickly introduced myself so they did not think some stranger dork was following them for no reason (I was a strange dork following them for MANY reasons) and we set into stride. Soon we were into DC proper and snapping pictures with Adam's cellphone of all the sites (It only took us about 7 minutes of fiddling to figure out the cell phone's camera option. Adam blamed it on being a new phone. I blame it on Adam's parents not knowing the dangers of prenatal marijuana smoke. [As Adam said when I teased him similarly while running: "I don't think I know you well enough yet for jokes!"])

It was then I realized that Adam had never been to DC and Ray had only been there a few times. As we ran down Constitution Ave, we were relayed turn by turn directions from the RV ahead. When I figured out we would be crossing the Memorial Bridge I told both of them that it would be a crying shame if we ran so close to the World War II Memorial, the Reflecting Pool and Lincoln Memorial without seeing them. So we made an executive decision to change the route ever so slightly, and took in these breathtaking sites.

Twenty (or more pushups) later, Ray rejoined Adam and I right before we hit the steps leading up to Abe. Swift footing up the marble stairway, we paused long enough to snap a picture or two and then back down the steps we went. Around the Lincoln Memorial, across the Bridge and down onto the Mt. Vernon Trail we went.

Originally the chaps had planned on being picked up here but they decided to run a little more. I told them how luckily we were to be having such a wonderful day for running after such subpar weather days and we just took it all in. This is where I learned that while Adam has never run a full "real" marathon he ran the first half of a long race at about a 1:09. Ray said he had felt good about his 1:15 until he had heard that. Then again, Ray has nailed a 4:19 mile so I do not what the hell he is talking about.

With Reagan Airport nearby, we passed scores of people enjoying the sun by playing rugby, soccer and football. Planes seemingly taking off just mere feet overhead were the backdrop for the handoff from Ray and Adam to Courtney Bennigson and Anne Mahlum, the next Team DMSE runners. My original plan was to head back home and make it a 15 mile run for myself but when two attractive females say: "Would you like to run with us?" you have two options
1. Say "Yes!"
2. Say "Sure thing!"

I think I chose both options.

Courtney's triathlon career earned her a 2004 U.S. Elite National Championship title as well as a berth to the 2004 U.S. Olympic Trials, for which she was the youngest competitor to qualify and Anne has conquered marathons on three continents so I knew I was not just running with pretty faces. (Of course, this did not stop a few cyclists who passed me running with these two from turning around and giving me a thumbs up. Didn't have the time to tell them that these two are out of my league).

Running on the trail some more we did not get to spend as much time talking as I had with the guys as we were trying to coordinate exactly where we were going to meet the RV and the rest of the team. Through cell phones we pinpointed a place in Old town and there awaiting us was the a good portion of Team DMSE. The ladies still had a few miles to go before their leg was done but my tired butt needed to go home. I had run just about 13 miles or so and enjoyed every minute of it (picture of the course I ran with elevation can be found below. 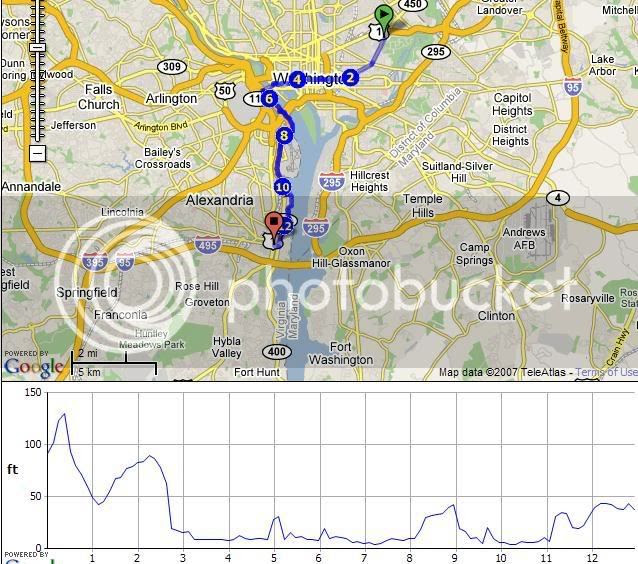 As the ladies, continued on their run, I got to meet many more members of Team DMSE, including Amory Rowe, David Salem, Taylor Sheehan, and his father Billy Sheehan. Right before I started running, billy and I posed for a picture. I don't like Billy. He is taller and better looking than me. Damn you Billy. 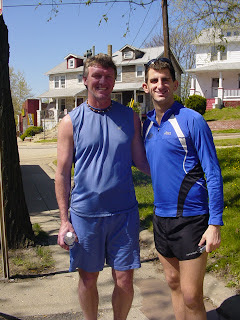 All and all, I had absolutely wonderful time and cannot imagine a better way to have spent a Saturday morning. If you can't make it out to run with this extraordinary group of people, please take the time to make a donation. Click HERE to do so. It is not just for you but it is for your children and the fate of America. 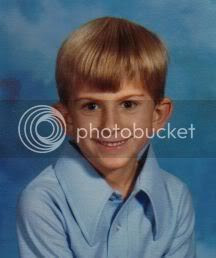 I'm glad you took Ray and Adam on that detour.