“I'd be curious to see the fiddy2 times on a graph to get a visual aid on how the times changed. the fastest times clearly seem to be toward the end, beginning in roughly september. do you think that was because of greater effort, superior fitness, cooler temps, or some combination of the above. I could see fitness increasing through the year without showing real benefits in terms of times until the temperatures dropped, but you'd be in a better place than me to speculate about that.”

This is the comment that sparked this blog. Blame Bart.

First and foremost, thanks to Katie and her Excels skills for getting me started in the right direction with the chart below. 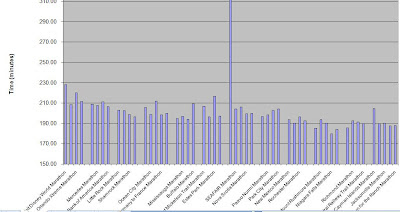 As you can see, the times for my marathons most definitely get faster as the year goes on. Many people could probably come up with a plethora of ideas why that happened but fortunately for you, the reader, you have the one person who knows exactly why actually writing this blog. Look how lucky you are!

To begin, let me start by saying that my initial thoughts for Fiddy2 were, as you may have heard before, to finish all the races under 4 hours. As you can see by that nasty little bugger in the middle (Leadville) that obviously did not happen. However, I think anyone who knows a thing abut marathons can understand why that race did not fall into the plan. Therefore, as an obvious statistical anomaly, I will discount it for all intents and purposes.

So, while I had that plan, I saw a few marathons into the year that running a close to 4 hour marathon was not something I wanted to do. To be honest, I found it far more tiring than trying to run faster. I would much rather finish in the sub 3:30 range if possible.

But I wanted to be careful. There was no sense in killing myself early on and blowing up the goal from the get-go. And having only run 12 marathons in my life coming into the year, I was not quite sure what I was capable of accomplishing before Fiddy2 or even a few months into it.

I will not go into too much detail here (I am saving all my great revelations for the book I am writing) but there were a few marathons that were really turning points for me. One was the Delaware Marathon in May where I ran a 3:13. I was pretty shocked at the time. I had been lowering my times steadily but didn’t think I would be in the low teens so quickly. I figured I might actually set a personal best somewhere during the year (at the time it was a 3:07).

Unfortunately, I began a stretch of some very difficult marathons. Beginning in Estes Park, I sustained a leg injury in my left leg that has migrated up and down the whole leg from muscle to muscle even until this day. Admittingly, it is far better now than it was then but because I could not take time off and still stick to my original goal (which I felt was the crux of the entire situation; setting a goal and not modifying it to suit my needs when things did not go according to plan) but it was bad then. Leadville did not help, nor did some of the challenging races in Nevada or Utah.

Without a doubt I am not a strong runner in the heat. I wilt very easily so the temperatures dropping would definitely help. But Niagara Falls was not the coldest of days, nor was Marine Corps or New York City. But during that time I posted a 2:59, 3:03, and 3:05 in 14 days.

As I then went on to post a series of Boston Qualifying times, I can now see I did so for a number of reasons. I was no longer afraid of finishing the stated goal. There was no way physically I was going to be stopped. Having shocked myself with a PR (at the time) of 3:05 in Johnstown, using very little effort (relatively) I knew I was capable of much more.

I cannot say my fitness got any better throughout the year but rather my ability to run that distance increased. I was definitely worn-down from not only the running, but the traveling, the fundraising and putting in my 8-5 life in a job to pay the bills. So if anything, my physical fitness went down as the year went on.

Weather and courses, undoubtedly assist in the process of running a fast time. But for me it was a combination of knowing what I could do, seeing the goal in sight and conditioning my body to handle the rigors of what I was doing. I cannot say I was giving all that much of a greater effort but I was definitely pushing myself.

The first few months were a feeling our process. I had an epiphany of sorts in May but then faced not only injury and tough courses but 18 straight weekends where I was not in my own bed. The only constant I could look forward to every week was I would be running 26.2 miles. In what conditions, over what course and through what sort of extra pressure placed on myself by either me or time constraints of travel, life, etc., varied. I rarely ran two courses anywhere close to each other that mirrored the week before.

So why did my times get faster? Because I realized my potential, was able to take a couple of stabs at some fast times, saw they panned out and then rode that until the end. If I were to do it again, I am pretty sure, with planning, I could get the vast majority, if not all of the marathons, under 3:10. Sure others have run a fair amount of marathons in a year faster. But when you run a very fast marathon time, slowing down 30 minutes from your pace is really not all that impressive in the grand scheme of things.

Now, buy the book when it gets published so I can afford to do this again.

Found your Blog Site, and it prompted me to start my own, though be it mine is not as impressive as yours.

Also entered to run Erie and Steamtown. Hope to see you there. You interested in pacing together at Erie?

What time are you shooting for? I want a 2:55 so anything right there is good for me.

How is your injury?