Update on the Marine Corps Marathon

The Marine Corps Marathon is a week away (give or a take a few hours). This will be my fourth consecutive running of this marathon and quite possibly my last for a while. But more on that later.

This year, construction on the Rock Creek Parkway has forced the organizers to reroute parts of the course. Construction, especially in a city and even more so in a city that is such a high security risk (being our Nation’s Capitol and all) has got to be a race director’s nightmare. Granted the first 4.5 and the last 5.7 are not even run in DC but that still leaves a great deal of headache.

My first year running the MCM was the first year the racecourse did not start by heading south towards the Pentagon (which I am quite surprised most people do not realize it actually in Virginia). Instead, it starts by going up into a neighborhood in the County of Arlington called Rosslyn. This first section is a little bit brutal, as you must go up a 200-foot hill, which ends at mile 2. Of course, I have always thought that if you can’t handle a little challenge at mile 2, maybe you should stick to a 10k race. They are cute and fun and you don’t have to limp the next day.

The race made more changes for the better in 2005 and stayed exactly the same for 2006. There were some things I felt could be improved but, as I have said before, the MCM was my favorite marathon.

However, due to the aforementioned construction some changes had to be implemented. The Rock Creek Parkway section is a really nice place to run and race. As I mentioned in a previous post: “(The RCP is so nice because…) for the better part of 2 plus miles, those of us running in the 3 hour or under category get to see something we usually don't see in marathons: the rest of the pack!

Usually, by the time you descend the RCP section you are a good 10k into this race. Semi-elite runners have separated themselves from the pretty good runners who have separated themselves from the "local class" chaps like myself, who are ahead of the majority of the pack. But, when you turn down the hill of RCP, you get an eyeful of 20,000 runners coming the opposite direction going up the hill that you just came down. I love this. Scores and scores of people in all kinds of colorful shirts and costumes and the like are chasing after that elusive turn around point. And when you see someone you know, they can always gauge how much faster of a runner you are then they are and then know how far it is to go until they themselves turn around. There are so many reasons to like this section of the course and it is now gone this year.”

So, I acquiesced to the change and hoped it might be easier than the RCP section. Heck, the elevation profile makes it look like a simple up and down. To make sure this was the case, the other day I decided to go run on the only section of the course I have never run on. Having drive half of the section every day to work for 3 years I knew the first hill was a doozy. But I did not know that after making the turn off the first hill (Foxhall RD) that the MacArthur section was a long steady uphill. Nothing too terrible but definitely more inclines than I thought.

After that incline you have a rather short but extremely steep downhill and then a complete ankle breaking, 180-degree turn onto Canal Road. Unfortunately this will not be the last of these type of turns on the new course. But I am getting ahead of myself.

Perhaps it was the warm sun overhead or the fact that I was running on the skinniest of shoulders with oncoming traffic in my face but this part of Canal Road was also a little more difficult than I thought it would be. Instead of going constantly downhill as the elevation profile suggests there is a little up and down here before you burst out of the wooded area which abuts the C&O Canal and into Georgetown proper. All in all this could be worse but it most assuredly could be better. (see below).

Now, I was looking over the rest of the course and noticed something. Usually when you come off of the 14th street Bridge and head into Crystal City (which I have to remind myself to find out why it has this moniker) you are at mile 22. However, this year it is mile 21. Where exactly were they going to make up this extra mile?

Unfortunately, I found out. Many people have lamented how the MCM ends by going up what seems to be an excruciatingly long hill to end in front of the Marine Memorial (OTW as “Iwo Jima Memorial”). Those who do so are probably pretty happy they don’t end like they use to when you ran up the hill, and then had to do a completely loop around the Memorial before finishing. This is one of the cruelest tactics a race can do to a runner I think. So when it was changed in 2004 to simply go up the hill and end, I was quite happy.

Well, now, in order to make up the extra mile (or so), instead of running north on RT 110, making a hard left and being inspired by the Marines pushing a flag into the rocky ground of Iwo Jima, runners must instead run about .3 of a mile up the road, make the aforementioned dreaded 180-degree turn, and come back to the hill before finishing. This, my friends, is a rookie-marathon designer mistake, which I am shocked occurred at the MCM. No one, I mean NO ONE, wants to make a momentum-killing turn at mile 25.5. How they could not have found that extra mile elsewhere is beyond me. Heck, they could have tacked it onto the big drop-off hill back where MacArthur meet Canal Road which would have allowed runners to use the momentum of the downhill to carry them before making the turn and coming back on Canal. I am sure that all of Canal is going to be blocked in the morning anyway. Why could they not have added an extra few tenths in one direction? 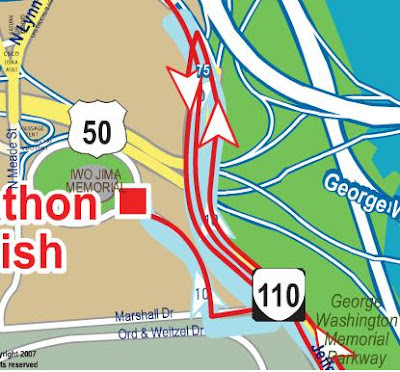 When I mentioned the big hill in Rosslyn being difficult but a runner should be able to deal with it that is because it was at mile 2. Making a marathon as easy as possible, at the end, is almost (I feel) a race director’s duty. For some reason, however, in many of my 71 lifetime marathons, I have found that the end of marathons seem to be afterthoughts with race organizers. They make sure the beginning is smashing, and perhaps the finish LINE is wonderful but the last 6 miles, where runners need everything to go their way, they neglect. This has always befuddled me. Making the ending of a race easy seems, well, so easy. I still to this day do not understand why races do not stock up on liquids for the end of the race. I don’t need my water and energy drinks at mile 3 one-tenth as bad as I do at mile 23. But I digress.

This is just my perspective on the race coming up. I hope it helps those of you who are familiar with the course but not the changes. Please note that I think the race is still a wonderful race and I fully expect to set a large personal best here. The crowds are without peer and running under the monuments still gives me chills even though I run in their midst daily. But I believe preparation is the key, so I did the legwork so you did not have to.

Thanks for you analysis, Dane. I've had similar thoughts about this year's changes, although I hadn't had an opportunity to check out the course changes first hand.

This will actually only be my second marathon--my first being last yrs' MCM with an ignoble 4:32. I did manage to suffer through the North Face 50k with you in August. You might recall that we met in the parking lot prior to the race. Anyhow, I'll be shooting for sub 3:25 next week, so I'm not so happy about the changes at the end of the race either! Particularly since if the stars align, I'll qualify for Boston with a 3:20.

By the way, I used "mapmyrun.com" to map and measure this course. You can view it this address:

I think that whoever drew that "official" map goofed! The mile markers in some places are way off and if you overlay the map with a satellite image, it doesn't look to me like it is physically possible to go some of the places their route calls for, especially getting on/off the 14th street bridge.

Based on me drawing/measuring this on a satellite map, that last "loop" with the 180 degree turn is not needed, because taking an immediate left to the memorial gives you exactly 26.2 miles.

Thank you for the analysis. I have never run this race before but finding out about the finish in advance can only help!

Hey Dane-
Catching up in some reading and wanted to wish you luck at MCM. Hope the race goes well.
I agree with on the 180* turn near the end of the marathon- not only is it a rythm breaker but also a safety hazzard once the thickness of the main pack gets to it.

BTW- congrats on the PR at Steamtown!

This is a really fantastic blog-- I had no idea what the exact changes were, so it's nice to see them all spelled out. That being said, I am only running the 10K this year. However, I will be subjected to the same 180-degree turn around in the last mile. Only going at a pace much faster than my marathon pace. Do you think they will change the course back to the 2005-2006 for next year?

Some of the slow runners/walkers are thankful for the change, because "beat the bridge" is at mile 19 instead of mile 20.

The end of the Miami marathon had an unexpected uphill at about mile 25.5. No fun.

Alan,
Good to hear from you!

Elizabeth,
I am sure they will change it back next year.