Two weeks ago, I was working longer than expected on a project. I then had the usual 5 plus hour drive to my parents lengthened by the pre-Thanksgiving traffic. By the time I got to my parents, I had enough time to chat with my father and then pass out. I didn’t even have the energy to go for a run. No big deal, right?

Well, a few months before, I was looking at my training log (the log which has become sort of legendary for its intricacy yet simplicity). I noticed, by complete happenstance, that I had run every single Wednesday in 2007. Now, my feeling on streaks just for the purpose of keeping alive a streak are well-documented, but when I saw I had inadvertently created this little streak I wanted to keep it alive. When I got up to do a pre-Thanksgiving jog, it hit me I messed it up.

Obviously, it was a tiny little thing. Even if I had run every weekend this year, come 2008 it would not have mattered a lick to anyone, even me. It was just a little training tool I was using to keep myself running. One of the main tools I use on a regular basis (and probably very similar to all my running kin out there).

So, today when I pulled into my hotel, tired from being on the road for 10 plus hours of planning a course and the temperature was in the 20s, I decided I was not going to run. I am just getting over a cold from last week and I needed the rest. But once I got into the hotel and found out they had a treadmill, I figured what the heck? Go for a quick 4-miler to shake out the sillies and get yourself nice and tired for bed. Which is exactly what I did.

Entering it into my log I realized I had now gone two weeks without missing a day of running. Nothing too impressive considering the longest run in those two weeks was a 10-miler but equally as “huh” worthy as when I figured out the other streak. I most assuredly never meant either but both happened.

Only 60 more miles to go this month until I have reached my goal for the year. Even with my traveling I am expect to have that in a little over a week.

I hope you all reach your goals, today, this week and this month. 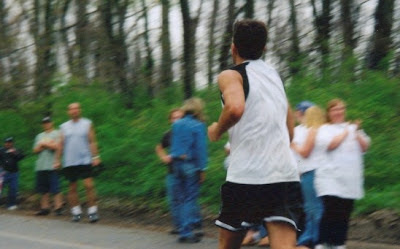 Sorry you missed out on that pre-Thanksgiving Wednesday, Dane! I remember when you noticed the Wednesday trend and started consciously running on that day. You'll have many more streaks. :)

Only 60 miles? I think Borat put it best when he said, "no problems!". You can knock those out in 6:42 if you just maintain your marathon PR pace (right?). Done.

My goal for today is to no longer be a/an LB. It's a lofty one.