My friend Kristin is finishing her PhD program and needed some assistance from some volunteers in the form of taking some test. When she asked me to help I was only glad to do so, as I did not want to be the one that kept her father from called her "Doctor". Being that we were scheduled to meet after work, I decided to up my mileage on Monday morning since I would miss my afternoon run. If you are not familiar with my non-desire to run in the mornings let me clarify: I prefer not to run in the mornings. But as I said in another blog, with the park right outside my door I could not resist.

So instead of my usual 3.75 miler, I upped it one lap around the park and did 5.25. I saw my new friend Henry out walking as usual and it lifted my spirit. (As an aside, when I get more time to stop and talk to Henry, he is getting his own blog. He makes me smile every morning.)

I went to work and on my way home realized what a beautiful day it was. The morning had been quite crisp with a starting run temperature of about 23 degrees. Here at 5:20 PM it was 57. 57! I called Kristin and told her I needed to postpone our meeting for 30 minutes. There was absolutely no way I was not going to do a run in this weather. She was kind enough to agree (being a runner and outdoorsy person she more or less told me that I HAD to enjoy the afternoon).

I laced up my shoes and burst out the doors. Shorts, shorts sleeves and warm skin. It immediately reminded me of the JJ72 song, Oxygen .(If you haven’t heard of them, you will thank me for introducing you to them. Their self-titled debut album is one of the top 10 best overall albums ever, in my humble opinion; I suggest you listen to October swimmer and Snow as well). People were out in droves fully taking advantage of the great evening around the park in the fading daylight.

As I began my first loop, I noticed a person on a bike seemingly pacing a rollerblader. While the cyclist should not have been on the sidewalk I did not think it would bother me. I mean, they are on wheels right? Regardless, my chase reflex kicked in and I began to pick up the pace. Before 3/4 of a mile I had passed the girl on blades. About 3/4 of a mile later, they passed me (and honestly squeezed me out a little bit from a small entrance; the park has a dividing wall to keep cars from turning with just a small hole in the middle). Well now I am just a little ticked. So even though they picked up the pace a bit, I decided to stay on their tail.

So I called Kristin, did her experiment, grabbed some quick dinner and then we settled down to watch a movie. The movie in question was one we had both been excited to see. It was entitled "Volcanic Sprint".  The movie had been sent to me by those promoting it and they asked me if I would give a view and let my readers know what it is about. I agreed!

Volcanic Sprint tells the tale of a marathon-length race in Cameroon which traverses over 10,000 vertical feet up a live volcano, one of the tallest on the African continent. The racers, mostly local farmers, compete for the equivalent of four years' salary. But to win they must overcome altitude sickness, temperature fluctuations of 50 degrees, and loose volcanic rock— many wearing only plastic sandals.

Runner/film-makers Steve Dorst and Dan Evans just released this and have just recently returned from filming the the 2008 race.

While there they donated running shoes to the local athletes with their charity partner Soles4 Souls; and made the first attempt to map the 30 year old race using Garmin and Polar satellite watches strapped to local runners (the results of which they hope to put on Google earth).

The film definitely shows the true human spirit in all of its forms. You have the local runners who take on ridiculously difficult challenges knowing what lies at stake. they could get seriously injured or die, but they could also make in 5 hours what the average Cameroonian makes in 4 years. It is apparently worth the risk. (The volcano is shown below with the city of Buea, the starting point in the foreground). 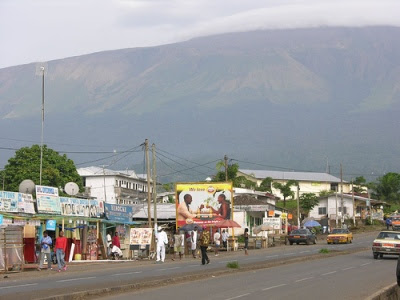 You also see the side of humans often left out of documentaries, or at least glazed over. For example, the very first winner of this Race of Hope, John Ekema is shown with his son who is also preparing for the Children's Race. Mr. Ekema lays his soul for all to see as he shows his bitter side at being barely recognized as the first winner. He is poor and destitute and thinks that some recognition should come his way. I am sure many trailbalzers in running, or in any walk of life for that matter, feel similarly and it is refreshing to see emotions that are not as candy-coated as usual.

There is the compelling story of Sarah Etonge, a five-time champion and mother of seven known as the Queen of the Mountain. Just days before the race, Sarah is haunted by a nagging knee injury and the strain of a hospitalized child. Sarah needs the money she earns from racing to support her children and the Race of Hope is the biggest purse in Cameroon.

For two-time champion Dominique Tedjiozem, attacked by rivals during the 2002 race, it’s a chance for vengeance. Will he be able to beat all-comers using his technique of laying low and bursting in the second-half? Will he even make it to the top of the volcano? 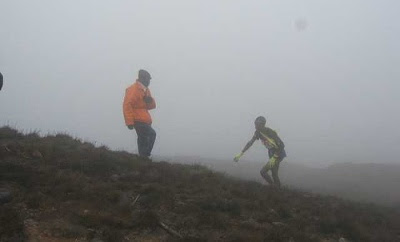 All in all, if the movie lacks anything it is more depth and that is a good thing. At just barely under an hour, you are left with a desire to know more. What about some of the other runners interviewed? What about the lone white female streaking by at one point? What is her story?

How can *I* take part? I know something is good when within 15 minutes, I was trying to figure out how a plane ticket to Cameroon costs. Kristin asked me "Would you really want to do this?!"

To me it is always amazing to see people struggling against insurmountable odds and achieving greatness. In America, we often have success stories of those who, well, have all the reasons in the world to succeed. They have money, health and opportunity. Here we see people who have little to nothing putting it all on the line for a chance for a better life for themselves as well as their family. Without a doubt there are stories akin to this world-wide, Luckily, this film captures a few of those tales.

If you would like to learn more information visit the following sites:

this is such a great movie...we have seen it many times!!!
Lisa
hey..I have a wonderful student in SLC..cute to..want to meet her?
Lisa