I have mentioned once fellow Arlingtonian (well "once" b/c I no longer live there; he does), Michael Wardian before in a few of my blogs. I have had the pleasure of meeting (briefly before he sped away) Michael at a few races and have seen him often (disappearing into the distance) on the trails in DC. I last saw Michael at the Frederick Marathon last year where he set the world record for running a marathon pushing a stroller. Given I ran on the same day and know the wind that we had to run through, I cannot believe he ran what he did (2:42; taking 3rd?!). Most of the last four miles, Michael had to run with both hands on the stroller to stabilize it. 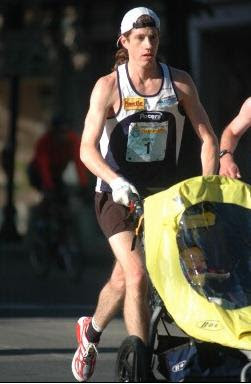 Wel last weekend, Wardian set the US 50k Road Championship record this weekend at the US National 50 championships in Camusett State Park, NY. Iron Mike broke the existing 27 year old record by 49 seconds with a time of 2:55:05. In the process,
Mike also broke ultra-speedster, Greg Crowther's Camusett course record set just last year by 9 and a half minutes!?
Posted by Dane at 10:38 AM

He really is a machine, and such an unassuming and seemingly nice guy, too. Congratulations to Michael! He certainly makes runners in the DC area proud. :) Thanks for bringing this to our attention.