This is hardly something I plan on doing on a regular basis but that is mostly because there are so few movies based on running. However, I received an early birthday present from my good friend Kathy consisting of two movies about running legend Steve Prefontaine; Without Limits and Prefontaine.

My desire to watch these both had been building for years but after reading Bowerman and the Men of Oregon, which I reviewed here I was really read to get them. As the author of Bowerman, Kenny Moore, was very much behind the movie Without Limits, I decided to watch that first. 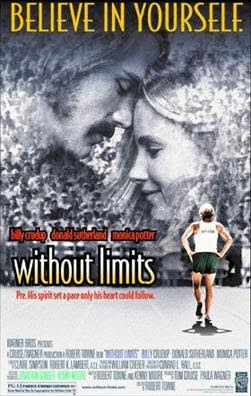 I am hardly a Prefontaine expert but I would think that Kenny Moore is, if anyone on the planet can claim to be. And Without Limits seems to echo the vast majority of what Moore describes of Prefontaine throughout his book. But besides historical accuracy, the movie actually contains some very good acting. Moreover, Billy Crudup does such a bang-up job of portraying Steve Prefontaine that it leads you to believe Crudup must have been a runner in his pre-acting life.

Splicing in real footage from some of Pre's races was a nice touch as well, and even though this movie was a box-office disappointment, I would highly recommend watching it. Even in races where you know the outcome, you find yourself on the edge of your seat willing Pre to victory.

Added bonus is when noted runner Frank Shorter (who is portrayed by Jeremy Sisto, and looks next to nothing like him, oddly enough) makes an appearance as announcer Fred Long. I got a total kick out of that.

Next up was the aptly named Prefontaine. 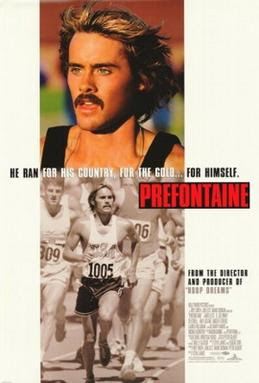 You could tell right away that Prefontaine was quite different from Without Limits. Besides the way in which the movie was told, (the point of view shifts from Bowerman to assistant coach Bill Dellinger) the entire thing seemed much more pre-packaged for Hollywood. Jared Leto plays Prefontaine and while looking strikingly similar to Pre, does not seem to capture the same aura or running style that Crudup did.

It is ironic how two movies telling basically the same four year period of one person's life can differ so much. I think Prefontaine was lacking in some of its historical accuracies but it did include more of Pre's interactions with fellow athletes (whether they were ture or not; one recounting by Moore in his book was that everyone thought the other guy was the one Pre was hanging out with as he was never around anyone.)

Both movies are worth watching if only because there is a general lack of movies out there about running. you will get two sides of the enigma that was Pre and both definitely show why he captured the attention of America so much.
Posted by Dane at 4:34 PM

I found your blog post through a site about Pre that I made:

It's got a lot of great biographical info, photos, videos, stats, etc.

You may like my blog, too. It's focused on developing the mindset of a champion distance runner:

getting faster all the time:)
Lisa

Dane - Love Without Limits... actually have it in the old 'VCR' version. My daughter picked it out of a pile of movies for $3.99 at blockbuster when she was small... that was back when I wasn't running (during my 18 yr. break!- WAS I CRAZY)! Anyway, being the runner at heart that I always deep down was .. I said hmmmm - looks good. We loved it/still love it.
I enjoyed meeting you. Good Job this past weekend! BTW - I signed up for M&B - (Pass down that extra copy to me when you've worn it out)!HaHa

the pleasure was mine. I have a slew I will happy give to you. Sharing the wealth I call it!

I will check out your blog.