A few weeks ago I was looking around for local, inexpensive races. I came across the Deer Creek Tri in nearby Heber City, UT. For just $45, I could participate in my first ever triathlon. But more importantly, the cycling part of this tri was mountain bike mandatory leg. Being that I only have a mountain bike, well, this was right up my alley. Moreover, with just an 800meter swim, a 7 plus mile mountain bike and then a 5k run, it was just long enough to get my feet wet and enjoy the race without worrying about too much sport-specific training.

After signing up, I tried to do a crash course in both cycling and swimming. I have only swam competitively once in the past decade (seriously,. ONCE) and that was in the Nations Tri last year as part of a relay. Unfortunately, my plans to swim in a local pool left me flummoxed when it was nearly impossible to swim laps amidst the revelers and kiddies. I therefore left my "training" at two separate workouts of 2000 meters each. I think this is pretty much what Phelps does for the Olympic trials. 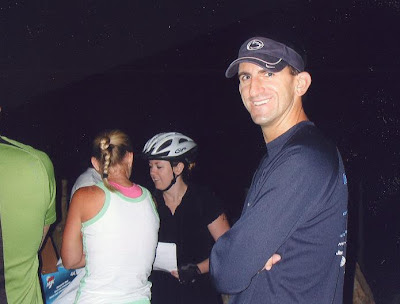 I decided I would drive to the race the morning of, even though it was an hour away and I needed to be there between 5:30-6:00 AM. This was a decision mostly made because I did not want to pay $120 for the nearest hotel as I am cheap (I like to call it "frugal".) I could tell the vast majority of this area was absolutely gorgeous but could not see most of it through the pre-dawn darkness. I was fortunate enough to have my friend Carmen volunteer to take some pictures at the race and I eagerly anticipated a strong finish to be commemorated in them.

Arriving early, I saw a plethora of jeeps and SUVs with their bike racks attached. I think I had the only 2-door sports car with my bike hanging off the back. I joined the line to sign the waiver and get my markings. I was happy to be finally doing my first tri! 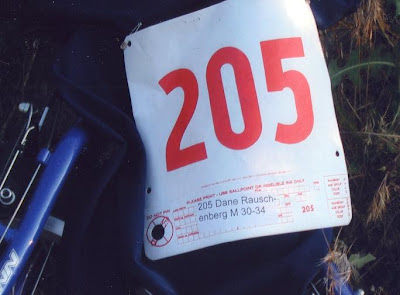 After signing all the necessary forms, I laughed when I was handed my bib. Apparently my name is too long and must be hyphenated!

I made my way to the start line about a mile away. I could see almost everyone else had a wetsuit with them. Even though the day promised to have a high of over 100 degrees, here in the mountains at 6 a.m. it was a brisk 47. Brr! I had contemplated renting or buying a wetsuit, but could not justify it for a race that was so short. I figured by the time I got the darn thing off after leaving the water, I would be way behind. So I opted for Speedo-esque shorts and prepared for a nippy swim.

Much to my surprise, when I tested the waters with my foot, the temperature was quite pleasant. Someone said it was 70 degrees and I believe them. Before long, the competitors (some who looked quite serious and I figured would give me a spirited challenge on this day) were in the water awaiting the gun. I think I was one of three out of perhaps 50 or so, who was without a wetsuit. 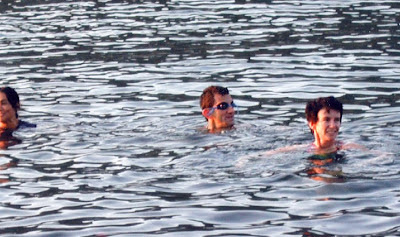 The gun fired (sort of) and away we went.

The swim was supposed to be an out-and-back 800 meters. However, based on the effort it took me to go this distance, I have a feeling it was a good 100 meters more both ways. But we all had to swim it, so no matter.

I immediately got out to a lead and began swimming around the first bend that we had in front of us. Given the nature of the reservoir, we had to traverse a small bend before we even saw our buoy in the distance in which we would have to swim around. I wanted to get out as fast as possible to avoid getting caught behind a slower swimmer. Plus, it was cold!

Going out, I had no problem. Coming back, I was trying to stay to the left of everyone swimming at me and also try not too get to close to the shore. In the last 50 meters or so, I unfortunately beached myself in the shallow water and had to push back out into the reservoir. Sighting was difficult as we were swimming right into the rising sun. However, before too long I was able to skirt the shoreline and jump out of the water. I figured I would be in the top few competitors and was fortunate to be in first place.

We left our shoes and gear near the water's edge as the trek up the hills to our bikes was rock-laden and could not be run in bare feet. As I sat on the mat and slipped on my socks and shoes, no one else came to the shore. I was going to simply wear my swimsuit as my shorts and if it was uncomfortable, well, it would be a short race anyway.

I ran up the hill but not before glancing over my shoulder. Again, no swimmers were in sight. 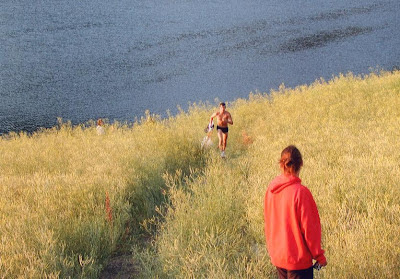 I got to the top of the hill and still, no swimmers. Had I gotten out in the wrong place?! 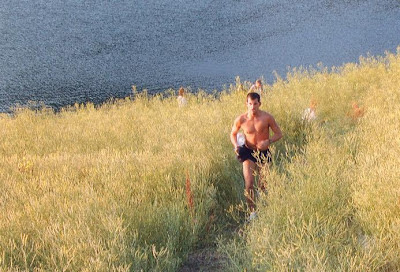 At the top of the hill, my shirt was waiting for me on Schwinnie Cooper (my bike) which was placed ever so carefully in its position in the rack. 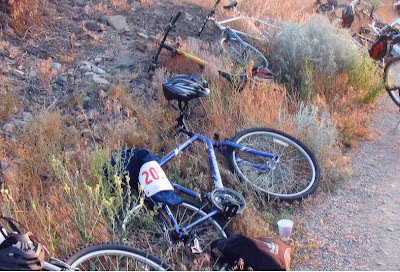 Earlier in the month I had tried to map out the bike course to see what the elevation would be like. Knowing it followed railroad tracks I did the best job I could and it appeared that I was in for a treat. Not only did the surface look hard-packed upon inspection this morning but the elevation looked like there was minimum change.

Unfortunately, I was wrong. Yes, the railroad tracks hugged the shoreline and barely measured any change in elevation at all. But the bike track, while FAR from horrendous, was far more challenging than I thought it would be. The surface in many places was a mixture of gravel and sand and in other places a little more hard-packed. Moreover, there was a fair amount of up and down with quick, right-angle turns that needed to be paid attention to lest one go spiraling down the hill.

After the first near-fishtail-wipeout going down a hill, I quickly became a fan of my brakes and rode them quite often. I figured losing a few seconds on the descent and a few more on regaining speed going up the hairpin turn was a lot less time than taking a spill and breaking all sorts of bones.

The funniest moment came when I realized that there were some free-range cattle on this course. While most would retreat when I got near in a perpendicular angle, one decided to run away from me...on the trail! I assuredly could not pass him and was scared to death he would either turn on me or turn right in front of me. But I was still laughing at the site. Man, cows can hoof it!

After about 100 meters, the cow finally pulled off to the side and I breathed a huge sigh of relief. Prior to my bovine adventure, I was nearly shocked off of my bike when a cyclist with a bib number passed me. Was I really THAT slow on the bike?! The biker quickly mentioned he was only doing the duathlon and I seemed to have a large lead on everyone else. I spent the next few miles trying to watch where this rider took his bike and with what speed in order to gauge what I could do as well.

Down one big hill and into the final transition I went.

There was absolutely no transition here. I stopped my bike, leaned it against a fence, took off my helmet, laid it on top and began running. I was wearing the same shoes for this 5k as I was on the bike and had no intention to change. A quick out and back with a slight hill in the middle was all that stood between me and my first completed triathlon!

I watched the duathalete in front of me climb the hill in the course right before the turn-around and rapidly descend in the other lane. Unfortunately he did not seem to notice he needed to enter a parking lot and do a good extra 100 meters in the parking lot before exiting. As it was not my place to tell him so, and given the low-key nature of this race, I simply followed the correct route myself and got ready for the last 1.5 miles.

It was not until I had less than a mile to go that I saw the next competitor. I eased off the throttle a little bit and coasted into the finishline with no one else in sight. 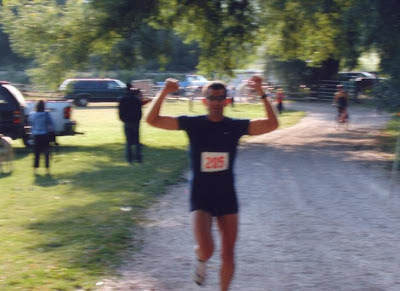 There was very little fanfare as I shook the hand of Mike the duathlete and we congratulated each other on our races. I was handed an extremely cool first place painting which will undoubtedly go on my wall. 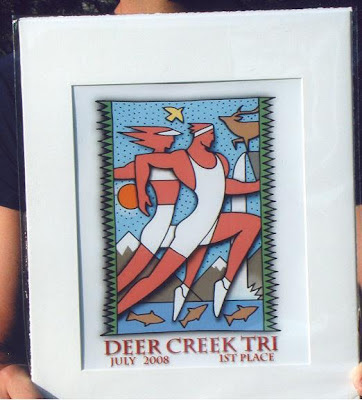 I was quite pleased with my finish and allowed myself a little smile. I think I earned it. 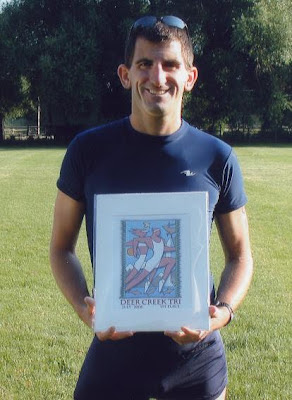 YAY!!!
Congrats on the win!

Wow, Dane - a win in your first tri! Love the award poster.

Sweet!! That is so cool, Dane! I'm so glad you opted to do this race. I know you will be a great triathlete! Congratulations!! I'm really happy for you. :)

Yay Dane! It gives me hope that I won't totally suck for my first Tri in September! MWAH.

Way to go Dane! 1st place at a first try of anything is awesome. I will forward this to my sister Elisa who is a die-hard triathlete.

Yay for my Dane!!! You're such a rockstar! LOL I sent out your Seattle Marathon stuff today... Also... guess who's going to be home in Seattle for 10 days over Thanksgiving and will be doing the Seattle Marathon as well?!?!? This girl!!! WooHoo!

Not bad for a first-timer ;)

Dane - That's awesome!! Great job and relish the victory!! I have friends that live in Heber and I've enjoyed fly fishing for trout in the lower Provo on several occasions - beautiful place. Great job on the tri!!

Love that there fancy bike rack!

Way to go on your first place finish! Sounds like you had a great time!

That is so sweet Dane!! You are definitely my hero. Congrats on your first tri and a great race! I knew you were destine to on to accomplish more feats. Keep up the great work!!

No wetsuit, a [relatively] junk bike, and a win. Tris may actually be a more slippery slope than marathons... When can we expect a new kind of Fiddy2?