Getting beat by a girl

I was talking with a friend recently about the only female who beat me at the Boulder Marathon a few weeks ago. I jokingly mentioned that while she looked familiar, all fit women who are kicking my butt look the same from behind.

Then I was trying to recall her name (I have a tendency to remember the names of the females that beat me) beacuse they are usually ones that show up at many races and you see all over. But I could not make it come into my mind. So I looked up the results and stared at them for a full five seconds. 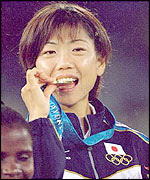 I then realized she was none other than the first female to EVER run under 2:20 for a marathon and the 2000 OLYMPIC MARATHON CHAMP! How the hell did I not put that together before?!?

I was so extremely disappointed in myself in not recognizing her name. I would have loved to have gotten her autograph. I did talk to her very briefly after the race and congratulated her on her win. Now I feel like a schmo saying "Way to go" to a person with a 2:19 PR who once held the World Record.

While her times have slipped as of late (a 2:44 is what she ran at the Nagoya Marathon in March of this year), there is something extremely satisyfing to know that she too did not run all THAT fast at Boulder!

It's okay to be beaten by a girl, Dane, especially when she is an Olympic Champion! Very cool that you had a chance to meet her, even if not formally. :)