Rules are rules...but give me a break.

North Lawndale College Prep started a very important game (the winner went to the State Championship) against Champaign Centennial in high school basketball a few days ago down 1-0. Now, I don't mean the game started and they were quickly down a point. No, before the clock started, thanks to a ""uniform violation" NLCP was assessed a technical.

when I first heard this, I actually was a little impressed. I thought perhaps someone had finally cracked down on the "shorts" that basketball players wear which are so long that even members of the LDS church (that's "Mormons"to those not in the know) would think are probably too strict. Believe me. I am not for going back to the days of shortie shorts on big men.

But today's lengths are just ridiculous. Maybe not as ridiculous as the scowls that basketballers must have ever present on their faces regardless of what they are doing but ridiculous nonetheless.

However, the uniform violation came not because of short short malfunctions but rather because NLCP's uniform broke a National Federation of State High School Associations rule that states the torso of the jersey — the area from an imaginary horizontal line at the base of the neckline extending to each armhole, down to the bottom hem and from side seam to side seam — must be a single solid color. Also, the side inserts (stripes) must be centered vertically below the armpit, and those stripes can't be more than 4 inches wide. NLCP's were slightly larger than 4 inches.

So, technical foul was assessed and Champaign Centennial made one of two free throws to start the game before it started by leading 1-0. One guess who won and by how much. Yep. CC downed flagrant uniform violators NLCP 66-65.

Now, NLCP says that this foul messed with their game plan and to some extent I buy that. Because of the technical the head coach could not stand during the entire game or even coach from the coach's box. How the heck hard would that have been? Have you seen a single coach ever sit down in a basketball game (besides Phil Jackson) for more than 90 seconds? 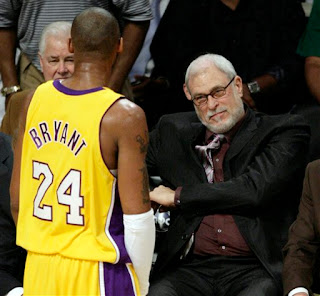 Now, I most assuredly wich toi point out that NLCP had a 10 point lead at one time in the 4th quarter. all they needed to do was take care of their own game and they would have been fine. there is also some discrepancy as to whether NLCP had been previously told of the rules violation. Furthermore, the team offered to wear their road uniforms, but Illinois High School Association basketball director Kurt Gibson said they were too colorful. given the coach's suit, I am inclined to believe him.

Regardless, it just seems to darn silly. Then again, so does me caring about it especially when basketball is one of my lesser favorite things to do. I guess in a world where so many tried to squeeze what little power they have to make the lives miserable of so many others, this just seems like an example where perhaps old button-down Gibson could have been a little more lenient, perhaps made it public that the uniforms violated the code (and to be honest they are pretty ugly regardless) and leave it up t NLCP to either make the change or fall on its own sword.

Or the White Sox. *shudder* 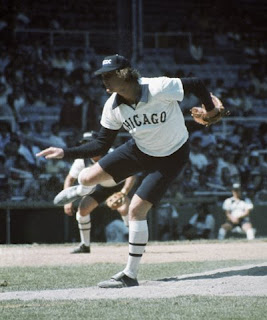 Penalizing them would be quite easy. Unfortunately, there is no time machine so we must be giving technicals to highschoolers for wide stripes to make up for it.
Posted by Dane at 10:16 PM

I understand your frustration but don't really have a good answer, either. Organizers need to maintain some measure of control more so than what's allowed in the pros, but how much?

When I was in high school a kid who finished top 5 at the state CC meet was DQ'ed because the t-shirt he wore under his singlet (it was near freezing that day) had lettering on the back that showed thru the white singlet. It violated a "no distracting competitors" rule.

That same year at the state track meet a team was DQ'ed from a relay final because one of the girls was wearing a blue bra under her singlet; blue wasn't one of the school's colors thus the bra was against the rules.