Well, I really wasn't expecting to do that.

The long and the short of my race in Bozeman, Montana at the Lewis and Clark Marathon is that
a. I am still quite energy-depleted from the 202 miler in April
b. Wrong turns adding mileage to an already tough marathon do not help.

Yep, I made two wrong turns in this race (well technically, two no turns when I was supposed to) that added significant mileage to my race in the beautiful environs of Bozeman.  On a day made for fast running with low temperatures, low humidity and a cloudy sky keeping out any of the ELSO (evil, life-sucking orb, aka "the sun") I was bummed from the beginning.  I knew I was not only in no shape to run fast but that this particular course at this particular elevation would not allow me to even come close to it. What stinks is that you rarely get weather this perfect and I could not utilize it. So, instead, I decided to bring along my camera and try to capture the beauty of the day.
I normally break down my splits here but since they are pretty much thrown out the window by my extra mileage running, I will eschew doing so. Pretty sure few people even look at the time anyway.

I took this uphill about as easily as I could as  I know I always start feeling pretty crappy and the elevation gain at this altitude wasn't going to help.  I did however, take shots of this new product called Oxygen4Energy and most definitely could feel some of the affects, even if it is pointed towards those who are in sports where there is a greater explosiveness of speed involved.

I had fallen quickly into the lower half of the top 10 of runners here and saw the leaders fade into the distance just a few miles in.

The second tale was the beginning of the 6 miles of relative downhill with runners gaining all of the uphill they had lost in the previous 3 miles and then some more to boot.

I quickly passed one runner as soon as we crested this downhill and immediately felt my lungs fill with oxygen again.  I simply am a horrible runner on the uphill portions.  Fortunately I am a good downhill runner - but not when my shoelace is untied.  How this newbie faux pas happened is beyond me but one shoe was completely untied and the other was working its way out of my double knot.  Man, those shoes were about as done with this race as I was!

Three more miles of downhill took us to the 10th mile of the course.  I had slowly gained a little on the runner in front of me but lost sight of him when we turned off of Bridger Canyon Road and readied ourselves for the big climb of the day awaiting around the bend.  When I myself turned the corner, I was shocked to see the runner in front of me, who I learned was named Kirk ("Like the Captain" he said.  Love it!) was just a few yards ahead.

As we began the baby climb before the big one, we chatted a bit. Kirk was using this as his last training run before is full Ironman in Coeur d'Alene where he was hoping to break an elusive mark.  I have a feeling he is going to get it.  When we began the lat big climb I unabashedly told him that I was walking it.  No sense dying at mile 12 for 6th place, I told him.  He ran about 15 more feet than I did and then stopped himself for the powerwalk session to come.

Just over a mile later and 400 feet of climbing under us, we began running again.  Kirk quickly pulled up here and looked lame but assured me he just had a rock in his shoe.  I took a quick pull on the Oxygen4energy and headed down the backside of the hill.  I began to rock these miles and was shocked to see 6:43 after 6:43.  The halfway mark appeared and I asked what place I was in.  The answer was 5th.

Here is gets interesting.  After a few more miles that were both feeling like I had been given a gift of new legs (somewhere in the 6:30s) I saw in the distance a train idling.  We had been told:

"In addition, there is a railroad crossing at about the 15 mile mark. Rail service on this track does not follow a regular schedule, and we cannot guarantee that runners will not be slowed or stopped on the course by a train passing through. This potential interference hazard is an integral element of the course experience, and we do not have the capability to adjust race times or finish positions due to runners having to wait for the train during the race. Please be aware of this potential hazard, and keep a sense of humor if it impacts you on race day - your understanding is appreciated!"

As such, I was half wondering if i would get and here cut of and here it looked rather ominous that I would! I picked up the pace, grabbed a glass of water from the volunteer and scooted over the railroad tracks with my hands up and shouted "Whooooooa big Fella!"  I got a good laugh out of that.

Soon thereafter, however, I felt a malaise take over me like few other times in a race.  sure i have hit the wall before and yes I had been running virtually all alone, but I just felt blah.  I perked up a little when I heard the train's horn behind me and smiled realizing I had indeed just made it  I began thinking about a plethora of different things to try and get through the miles, and how  I was shaping up for races the rest of the year and...why did the road just end?! Crap. I just made a wrong turn.  Or more accurately did not make any turn and ended up running down a dead end street. 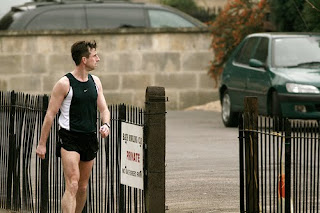 Turning around I went back and saw that if i had been running on the right hand side of the road the arrows on the ground would have been more visible. In actuality if I had been in even more of a daze I would not have seen the "Dead End" sign and my mile long detour would easily have been closer to three.  But now I was back on course.  A little jaunt through a neighborhood and at the relay exchange a little before mile 19, I saw a little group of people including one particular team who always seem to be there at the exchanges.  It appears that I was right ahead or close to their team.  They would prove to be very helpful to me very soon.


About a mile later I missed yet another turn.  This time as we were running on the right hand side I was being ultra aware of the traffic on the road. Even though it was coned off and there were volunteers directing traffic on some of the turns, being a runner and running with traffic at your back never feels good.  When I ran the 100k Sawtooth Relay solo, the entire course was done this way and was just unnerving.  That is why I think I missed the turn.  as the minutes went by and no markers and no aid stations appeared I realized I was in the wrong place.  I sort of came to a stop and stood there wondering where I could have gone wrong.


Just then the relay team I mentioned pulled up to me coming the opposite direction.  They had seen me go the wrong way and were trying to cut me off at the pass. One of the runners who had done the first leg, volunteered to run with me back to the original course.  He was from the area and ran here quite a lot.  They volunteered to give me a ride back to where I had gone awry.  I pondered it but couldn't tell if that would be cheating.  I finally declined and just followed Doug as he got me back on course.  I figured I lost another 2 miles here give or take but didn't even bother looking.  Back on course I quit even looking at my watch or my splits and just motored on.

Near the end, I passed Gary, a runner who was completely confused as he knew I had been way ahead of him and upon finishing the race, had another runner come up to me and ask me what happened.  He too had been far behind me and was curious how I had gotten behind them.  I just shrugged and tried to look on the bright side of things.


"I got to run an ultra today for the cost of a marathon!"

All things considered, my time of 3:27:27 might be one of my best races ever.  I was easily close to three hours at the marathon point, on a tough course at high altitude.  But this day belonged to the speedsters and those who were local.  Both college students broke the course record and the top four runners were all from Bozeman.  It was an absolutely beautiful course and a great town.  Definitely not a race where you would want to run if you need crowds or bands or throngs of runners beside you.  But if you wish to challenge yourself and see a beautiful slice of America, I would highly recommend it.

Dane, I ran the American Odyssey relay with a TEAM. You were an inspiration any time I felt tired---and an inspiration to build my own miles. Any advice for an ultra-running wantabe on getting started? My personality is such that I'll do too much too soon ; ) When did you do your first 50K, 50-miler, 100-miler, etc.?