A few years ago I became friends with a runner named Sam Felsenfeld.  We have seen each other at numerous races and had participated in some running forums together.  Sam had a story like many others in some ways and unlike few others in some other ways. I wanted to take a few minutes to share with you his story as he is not one who will toot his own horn.

Topping out at 261 lbs, Sam was far from healthy.  He decided to get into shape by walking. Giving up smoking he then upped the ante and took up running.  That is the not-so-uncommon part of the story.  Weight loss stories are a dime a dozen.

However, Sam also had broken his neck in a swimming pool accident when he was 16 and the use of his legs was questionable. This is where the uncommon part starts.

Not only did Sam recover from that and then subsequently drop the weight (he is in the 190 lbs range, giver or take an In N Out Burger or two); he got fast.  However, his "fast" was agonizing too.  Why do I say that?  His first marathon was a 4:06. In a year in a half, in only 9 marathons, he got that down to 3:00:05.  If you know anything about running you can be both:

1. impressed by that fantastic drop in time and;
2. feel in completely agony that he didn't break three hours by 5 seconds.

And he tried a few more times to get that elusive sub-3, each time falling just a few minutes short. Then he put it all on hold to run 61 marathons or ultras last year for Operation Jack- benefiting Autism research, and hopefully his son Jack, the namesake of the whole sha-bang.

His next attempt at going 2:XX:XX?  Boston, last weekend. Sam always runs well at Boston, running a ridiculous 3:03 there last year, two days after another marathon in Virginia, smack dab in the middle of his 61. His training runs felt good and outwardly Sam was quite confident.  As I stood near the finishline last weekend watching records fall and amazing accomplishments all-around, I kept an eye on the clock and an eye out for Sam. I had no doubt he had the desire and training to go sub-3 but I also know that rarely does the marathon go the way we want it on the day we want it. 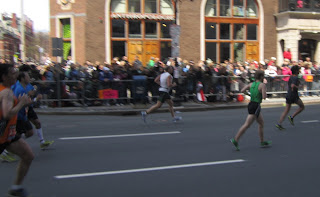 So when I finally saw Sam pass me, with about 3 minutes to go until the clock broke three hours and about one minute of running left, I breathed a huge sigh of relief. Probably not nearly as huge as Sam did but nevertheless, I did. Finally, three and a half years after being so close it is sickening (honestly, I an think of no marathon running time worse than being so close to 2:XX:XX and not breaking it), Sam got his: 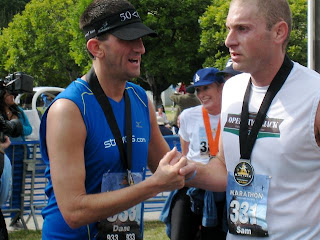 He finally got it.  Now, Sam and I will be racing each other at the San Francisco Marathon, both as Charity Chasers. Starting dead last (or at least tied for it) we will try to pass as many people as possible to raise money for our respective charities on Crowdrise. (Donate HERE).  Regardless of who raises the most money, for the first time ever, we will be running the same marathon both as sub-3 hour finishers.

Great story. Congratulations to both of you. Keep it up.

awesome post! i was lucky enough to also see sam go sub 3 in boston. standing at mile 26, ill never forget the look on his face when he knew he had it. i hope you have a fantastic run at san francisco!