This is a good week for putting into play my speaking efforts at marathons. This morning I firmed up a deal to be the featured speaker at the inaugural Santa Barbara International Marathon.

For the longest time, Santa Barbara did not exist as a real city to me. Growing up in Pennsylvania and rarely leaving a 50 mile circle from my home, anything on the other side of the country might as well have been on Mars. And Santa Barbara? Well, that was a soap opera. With wealthy people whose lives I did not understand. Now, the first weekend of December, I get to run through the American Riviera and help break in the first marathon run through the streets of Santa Barbara in over a quarter of a century!

And to help as many as you as possible to join me, I was able to procure a discount to help defray your costs! All you need to do is click on the button below and when prompted for a code in the registration process, put in, in all capitals, "SBIMDANE2009"

Voila! $10 off and come this December 6th, you will be joining 5,000 other runners in making history. Keep in mind this code is good for either the marathon or the 2-4 person Health and Fitness Relay.

Believe me, there is nothing quite like running in Southern California in December when everyone else is freezing their tuchus off back home. It makes smiles like this happen! 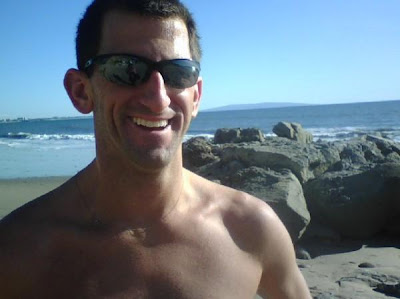 Here's my issue. I am considering SB for the 3 marathons to get maniac status. BUT do I really want to run 3 marathons? :) I will consider this though, as this was the one that I was thinking of doing AND with a discount... hmmmm :)

Yes, you do want to run the marathon, but rethink that impulse to join the Maniacs. Soon they will have you running 2 or 3 per WEEKEND and you will no longer have a real life.
Maniac #515

Hey it get cold in Santa Barbara. Last year it got all the way down to 39 degrees! That there is frigid! ;)

Seems the decision has been made for you! :)

Tom,
Thanks for the insight, Tom. Been in the club for over three years now.

There used to be a Santa Barbara Marathon back in the 1980's. I ran it on 10/17/1982, so this one in December will not be the first marathon running on Santa Barbara streets.

Thanks for the clarification, Rick. I will make sure I do not make the same mistake in future posts.