In the past few weeks I have been traveling and speaking at various races. At my book signings I invariably encounter people who are carrying a bag full of race goodies. Asking them which race they are partaking in this weekend, some will give me a sorrowful look and mention how an injury derailed them about a week before the race. As such, they are here just to pick up the things that they have already paid for and to get some deals on running apparel.

While I have been fortunate enough to not have an injury keep me from racing at an important race, I have had to miss races for a variety of reasons. The most recent would be when a bike accident kept me from competing in the World Aquathlon Championship in Australia. Having qualified for the US team in my first ever Aquathlon in August, I was more than stoked to represent my country at the Worlds. 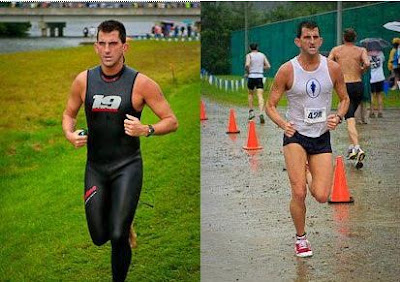 I did not think that 9 days later I would be in the emergency room with news that there was no way in heck I was going to be swimming a few weeks later. So I do understand the feeling that training and hard work, when derailed by an injury, can feel like a total waste.

In speaking to these people, I offer as much solace as I can and try to impart to them that I do indeed feel their pain. I then try to point out that, for many of them, while crossing that finish line would indeed be a dream come true, they have already gained so much. Often these people are not going to even come close to winning their age groups, let alone win the whole race. They are the ones who have gotten off the couch after years of neglect to their physical well-being and are happy to just be running. You know, the plodders. The 6 hour finishers. The ones who many feel don't even belong in the marathon.

While this blog is not about a debate of whether "slower" runners belong in a marathon, I will say that my opinion falls a lot in line with Greg Meyer, who in 1983 was the last American man to win the Boston Marathon. Greg, who I had the pleasure of meeting and spending some brief time with at the Brooksie Way Half-Marathon last year says that when he hears such complaints from average marathoners, he replies, “If it wasn’t for the run-walkers, you wouldn’t be finishing in front of anybody.” But I digress.

My point is that, there will be another marathon for these people, the injured, to finish. In the meantime, they have gained so much more. Physical fitness, mental resolve, and probably a whole group of new friends are now in their back-pocket. Completing the marathon is not just that one day's worth of events but rather months of training and sacrifice and the rewards that come with it.

Summing up my feelings on the subject, a runner I met in Manchester this past weekend sent me an email recently saying, amongst other things:

"The entire experience of training for and then running the marathon has allowed me to connect with myself and reflect on my strengths and weaknesses more than I would ever have imagined! It may sound silly, but I feel like I accomplished much more than just running 26.2 miles."

Nope, Rebecca, it sounds just about right.
Posted by Dane at 2:13 PM

This reminds me of an article I read recently. I think it was on Runner's World, but I can't seem to find it. It said that they should give out the marathon medals at the start of the race. All the real work and hard training is done before the starting gun is even fired. And just making it to the starting line is the real victory. A marathon itself is just prolonged victory lap in celebration of all the trials and tribulations you went through to reach this point.

And even though I have yet to run a marathon, it's an idea that I am keeping with me as I train for my first marathon. Because in all honesty, Im running the marathon now. The race is just icing on the cake!

I have often heard people say something along those lines but I have to disagree on one point. while the real hard work and training is done prior to the race, that race itself is not just a victory lap. That is akin to saying that there is no need to try hard in the SuperBowl because the regular season and the playoffs were really hard.

There is still plenty to be achieved by running that race and the point I was trying to make is that there will still be that chance down the road. But until such time, all that hard work you mentioned (and many other things) are indeed worth the efforts.

I hope your first marathon is a success and you enjoy every bit of that icing!

I also thinks it differs between running your first marathon and running multiple marathons. If you put in the work during your prior to your first marathon, the res should just be fun and rewarding. Now on marathons done the road, you may have other goals such as PRs, in that case there is some work still to be done.

But I'll use the Super Bowl analogy as well. A coach will tell his players about all the hard work and trials and tribulations that took them to reach that point. How getting to this point is such an accomplishment and to go out have fun and do what you do best. And though some players may feel different initially, the coach is not going to say if you don't win the entire season was a failure. Of course there is still work to be done, but Im pretty sure that the Arizona Cardinals aren't going to look back on last year and think that their season was a disappointment. They need to be applauded for reaching that point.

Now I definitely wouldn't want my finishers medal at the start of the race, but Im just looking at it from the perspective of a first marathon where I just want to go out finish the race and finish strong (aka running through the finish and not dragging my feat). And Im fairly certain that by the time I reach the start line I know if I'll be able to accomplish that or not. It's not to say that Im not going to give 100% effort during my race and not to race it smart, but the hard part truly is over.

Thanks for all the tips during the Monumental Marathon yesterday; it was invaluable! Those last few miles were absolutely nasty because of the wind! Crossing the finish line made it all worth the effort!