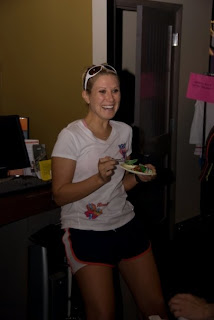 Melissa began her three races in three days escapade by hitting up the Wishbone Run in Gig Harbor, WA.  This races is a 27.8 mile trail run done on 4 laps of a private trail.  Pay $10, show up at 7:30 AM and you have yourself an unconventional ultra-marathon distance in your pockets the day after Thanksgiving.  Melissa ran 4:28:10 and took 10th overall. 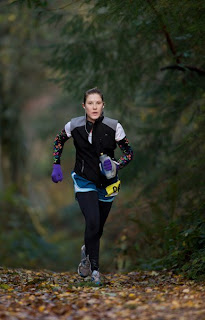 Day Two was time to hit up what is called the Ghost of Seattle Marathon which follows the original course of the Seattle Marathon up until it was changed in 1985.   Two laps of a half marathon course had 60 odd runners taking their feet out of Seward Park to Leschi Park and back again.  This time Melissa smoked a 3:48 and was the second woman overall in the race. 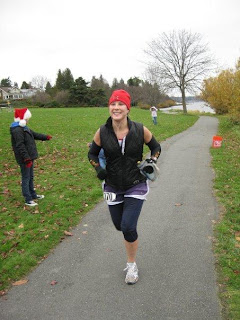 The final event of the triumvirate of racing was the Seattle Marathon run on the Sunday after Thanksgiving. Prior to the event a local reporter caught Melissa relaxing before the race and napped a photo of her.  Not realizing that the vast majority of marathoners see no need to hop up and down and get "ready" for a race like sprinters do (heck the first 10k is our warm-up), the reporter mistook Melissa's calm demeanor to be a potential moment of weakness.  upon asking her if she was regretting her decision to run, Melissa said, "Nope.  Just resting for my third marathon distance in three days!" 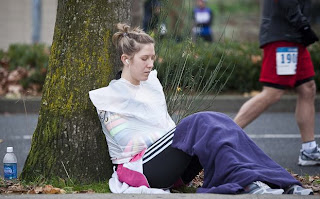 Getting off the ground and heading out, Melissa ran her best time of the three days, on a course known for its late mile hills which have crippled many a runners dreams, in a time of 3:41:47!  Melissa claims that she feels her post-race dip into Lake Washington is what allowed her to recover so quickly and do so well  in her final race of the weekend.  Perhaps, but I think it is the heart of a true runner, ensconced in the enjoyment of the race which allowed her to do so well.

Congrats to Melissa and to all who completed this Triple Crown of running.  You assuredly earned whatever second or third helping of turkey you had on Thanksgiving Thursday!

Thanks!!! We are totally on for that run very soon:)

Melissa is an aweseome runner and person. Glad to see she's getting the hype she deserves! Thanks Dane!!

Melissa is really fun. She came to our group run last night (the day after finishing her triple) and was right there with us, not a complaint to be heard. She truly loves running, meeting runners, finding new routes and races, and, yes, watching Monday Night Football with us after the group run.

We're so glad she moved to Oregon!

miss you, but glad to see ALL the things you're up to

That sweet trail picture makes me want to run the Wishbone Run!

My pleasure, Melissa. I love spreading the cool words about other runners.

Anne, she assuredly seems so!

Kelly, I am bet she is missed where she was.

Melissa's Mom, I let her know!