There is never enough time or space in my race recaps to even begin to list all the people I have met or whose stories have inspired me. I can just do my best to touch on as many of them as possible. One person who really struck a chord with me was a woman who spent her formative years in Manchester and is one of the all-time bad guys/girls of television history: Jane Badler. Better known as Diana from the 1980s hit series, "V". I am, of course, kidding. Not about Ms. Badler being from Manchester (sometimes it sorta scares me the trivia I have rattling around in my head; might explain why I could never understand that the Rule Against Perpetuities in law school), but about who really did stick out in my mind.


His name is Theodore "TJ" Stevens and while he is a Manchester police officer, he also ran 64 laps around a military camp in Kandahar, Afghanistan carrying the American flag alongside a 14-foot concrete wall and armed guard towers to run the "Manchester Marathon" just last week. As you may recall, when I was directing the Drake Well Marathon back in August, we had a couple of soldiers doing very similar things. They were unable to make it to run my race, as they were doing that little thing called defending our country, so we allowed for them to be participants in our humble little event. TJ did just that as well and did so to honor a fallen comrade at the same time.

I had the honor of signing TJ's bib number, 83, which will be sent to him in Afghanistan. However, TJ doesn't necessarily need this bib number as 83 just happens to be both the badge of Manchester police officer Michael Briggs, who was shot and killed in a Manchester alley in 2006, and the tattoo on TJ's right forearm. 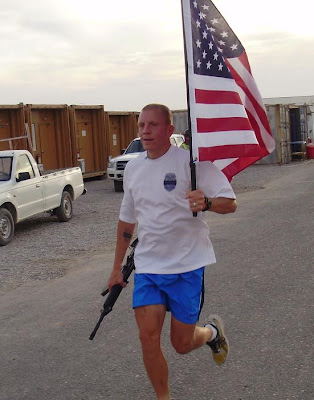 The person who shot Briggs, one Michael Addison, had actually received first aid from Briggs three years earlier in an unrelated shooting accident that probably saved Addison's life. Sure does make you want to hit something, doesn't it?


I had first learned about Officer Briggs' untimely passing the day before the marathon. At the Kids Marathon which started in the local minor league baseball stadium, I noticed that there were two retired numbers on the outfield wall. One was 42, which any baseball fan would know was Jackie Robinson's number, retired league-wide a few years ago. But rarely are other numbers retired in the minor league system. I inquired about it and got a thumbnail sketch of what had happened. Responding to a domestic disturbance call involving Addison and another person, Briggs ordered both men to stop when they began walking away. Addison continued walking away. When Officer Briggs again commanded Addison to stop, Addison turned and shot Briggs.

Now there is no need to go further into the details here but to suffice it to say that this was a ground-breaking trial in the greater Manchester area. Furthermore, it is nice to keep things in perspective. On the exact same day that I was finishing my 52 marathon of the year in 2006, the Manchester newspaper called the Union Leader was naming Michael Briggs as the New Hampshire Citizen of the Year.

Unfortunately, too often awards and recognition in life are given out far too late. As the temperature went well over 90 degrees, TJ however, continued to run laps in Afghanistan just a few days ago, carrying both his weapon and the American flag to pay homage to Officer Briggs. However, while he is 7,000 miles away from those he loves the most, distance is sometimes only in the mind.

"(In my mind), I'll finish up running down Hanover Street, making the left turn onto Elm," TJ says, "where I will again meet my wife and son for a kiss."

He says "again" because TJ ran the hilly and challenging course in Manchester just last year in a time of 3:21:47, brandishing the American flag the whole way. This year? Well, let TJ's watch tell the story. 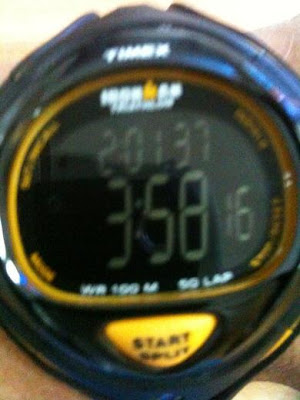 Wonderful story! Thanks for sharing!