In my travels around the country and world, I have learned that, for whatever reason, while everyone calls their fastest time in a race their "personal best", only Americans shorten it to "PR" (presumably for "personal record".)  My Australian friends always say "PB" and it automatically makes me think of Peanut Butter and Jelly sandwiches and how I once dated a girl who thought that idea of PB &J together was disgusting.  I think that is pretty much against the Constitution and all for which it stands. But I digress.

Tomorrow I will be shooting for a new personal best, personal record, fastest time I have ever run (or whatever you would like to call it at the Mesquite Marathon in Mesquite Nevada.  While many I know are hesitant to state their goals or their ambitions, sometimes to not jinx themselves, sometimes so that they do not have to answer "No, I didn't get it" to well-meaning friends who ask them how they fared after a race that did not go off as planned, I think it is good to get it out there in the ether what you intend to do.  It really is a freeing feeling to let others who do care know your intentions. 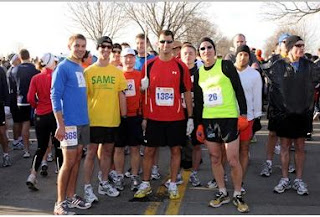 That said, I may have the proverbial snowball's chance in hell in setting that new PR this weekend.  Well, maybe not that bad of a chance but I am definitely not sitting all that pretty.
The reason I say this is I am still working my way back into shape after I was hit by a car while cycling back in August.  The subsequent injuries and nearly three weeks of no exercise wreaked havoc on my physical fitness.  I then embarked on a trip, which I am nearing the end of, that will encompass 8 marathons in 63 days ranging from New Hampshire to Hawaii.  Throw in the expos attended, the speeches given and the horrible food one must eat when on the road and all signs point to a not-so-great day for me tomorrow morning.

But one must always take into account the human spirit and the desire to achieve.  For me, I know this will be the last time to attempt a marathon PR for quite some time.  My first two marathons next year are on the same weekend.  No PR there.  I then begin training for a 50 miler, a 100 miler and my 204 mile American Odyssey Relay to be done solo.  Any marathons run in between all those events will either be pacing efforts, part of my Charity Chaser events or training runs. So it is either tomorrow or Lord knows when.

Fortunately, in my favor are a few things.

1. My marathon PR is, to me, a relatively weak one.  I am never going to set the world afire with my speed but I know I have in me a time that far exceeds my present 2:49.  When I set that time in Ogden in May, I actually slowed down in the last few miles in order to make sure I did not cramp up and finally was able to achieve, what had been to me, a very elusive sub-2:50 time. 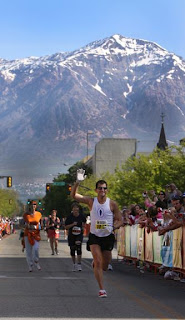 2. The course is extremely favorable to my strengths, if I run intelligently.  Starting with a roller coaster-esque downhill, the race goes down nearly 1500 feet in the first 9-plus miles.  Usually a race with such downhill must start at a very high elevation and once the course flattens out, runners are still subjected to the thin air and heavy breathing which accompanies that.  For that I again look back at Ogden, which has a great beginning and a great ending with regards to downhill running, bu the middle section can test you as it is all run at nearly a mile high.

This race appears to have the best of both worlds with the downhills and the relatively low elevation.  There appears to be a hill at mile 20 that will test the mettle of a person shooting for their fastest time ever but challenges are what makes the Marathon the wonderful event that it is.

But all the speculating and hypothesizing means nothing if one doesn't perform.  So, should i be able to set a new personal best tomorrow.  I think so.  Should I be able to really crush that 2:49?  If I felt a little more in shape I would say my chances of doing so would be much greater.  But I know I will be going all out in an attempt to do so.

And the best effort we can muster, on race day, given whatever circumstances life has surrounded us with, is all any of us can be asked to do. Fingers crossed!
Posted by Dane at 11:04 AM

Growing up I swam a lot (a WHOLE lot). I actually had a coach who actually referred to personal bests as "PBs". And while I call them PRs, PBs doesn't really sound foreign to me.

One reason why I don't like to let slip my "TRUE" goal in any race is that I hate making excuses. And Im not talking about excuses once I cross the finish line. If I go out and give it my all there is no need for excuses. Im talking about making excuses before I even run (I had an injury, not a favorable course, I've been sick, etc.) That type of thing always sets yourself up for failure (at least for me).

I like to tell people one goal that I know is attainable. I then have another goal that I'll right down, but won't tell others. That's what Im really shooting for. And obviously, these goals don't always have to relate to times.

Well good luck in trying to get a new PB!

Dane, good luck on your personal best! I see you ran the Tucson Marathon before. I am running it for the first time in a few weeks. Do you have any advice for me? Thank you!

I know you were hoping to run 2:43 (at least that was your goal when we spoke at the Richmond expo)...still waiting on results, but I hope you were happy with your race.
I'm thru the 1st 13 of your races so far...

Hope you hit your goal. I ran it yesterday and was a bit surprised with the hills after about mile 12 or so. They really took a toll on me (and some others) after the quick downhill start.