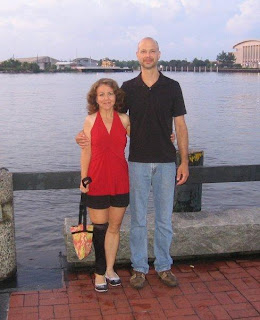 In my Atlanta Marathon recap I mentioned runner Kelly Luckett and how she deserved her own posing. Now here it is and I am going to tell you why. Kelly is an amputee. We tend to label people by what they don't have (e.g.., blind, deaf, etc) and to say Kelly is an amputee is obvious, and helps with context, but it is far too limiting. Kelly is more than an amputee: she is one kick ass-amputee.

To begin, Kelly's amputation is the result of a lawn mower accident which occurred right around her second birthday.  She lost her foot that day but not her spirit.  Her amputation is called a Symes amputation which means it's at the ankle joint, so she doesn't have enough clearance from the bottom of her residual limb ("stump") to the floor to have enough room for the higher-tech walking and running feet.  She has a running foot, the Cheetah Foot, but it's meant for sprinting not distance running.   The Flex Foot which many of the distance runners of note (e.g., Sarah Reinertsen, Amy Palmiero,) have for running, is not one Kelly can use because of the aforementioned lack of clearance.

However the trade-off is that trans-tibial amputees like those mentioned above have to rely on crutches or a walker to get in and out of the shower, use the bathroom, etc.  As Kelly notes with her usual smile and wit about the cards life has handed her.

"My residual limb is weight-bearing and long enough that I can 'walk' on it  a short distance, which makes daily life activities much easier."

How is that for spunk?  She lost her foot so that she can't have a normal life per se but not enough of an amputation to give her what she needs to really compete with advanced prosthetics and here she is happy she can do daily life activities many of us take for granted!

So, what is it that gives Kelly that little edge over so many other amputee athletes?  Well, as I mentioned above, she doesn't have the technology, or can't use what is available, to be one of the "best" amputee athletes out there in terms of speed.  But man does she motor. 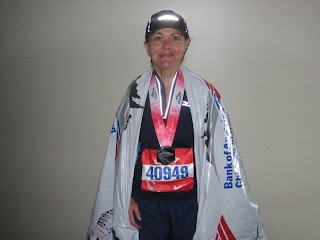 
The average finishing time for women in 2008 was barely faster than Kelly's time.  And I am guessing that of the ~200,000 female marathon finishing times, not too many were done by those with just one leg or part of one!