Last week when I finished my 50 Mile race I was visited by an old acquaintance.  I would like to say that it was a nice visit but the acquaintance was not welcome.  This acquaintance?  A pain in my left shin and calf muscle.  For two years I suffered from this tightness almost daily, a reoccurring malady from the Estes Park marathon and that entire weekend. 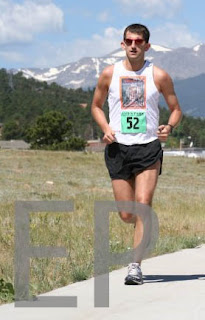 Suddenly, one day it went away.  I went for a run and no longer noticed the pain.  It was actually quite shocking.  Sure, when I pushed a race really hard or had a massage done I could feel the tightness but it no longer bothered me.  Of course, not soon after that left leg pain was replaced with the right leg pain of a swollen Achilles tendon, which I have now had for the better portion of two years.

Neither really got much worse than nagging pain but when you are bombarded constantly with people telling you that your chosen style of running is detrimental to your health (and if you don’t believe me, I can provide links to written stories specifically mentioning how what I was doing was not only bad for me but for “running” in general) you are prone to be a tad more injury aware. you may be even more desiring to prove people wrong.

So, after the 50 miler, I was not exactly happy to feel this left shin pain but figured, after 50 miles, run very hard (8:14 minute pace) I should expect something to ache.  Through the next week I noticed it was still lingering but thought nothing of it.  During the Pasadena Marathon I felt the achiness as well and post-race was hobbling just a touch.  I was fine yesterday when I was walking around and did not notice anything was askew until this morning when I went for my first run after the race.

The first few steps were quite painful but within a few more it was better.  The pain was there but not sharp.  It soon deadened and by the end of the 5.25 mile run, it was more or less gone.  After a day of work, I realized I wanted to get another 5.25 miler in.  I put on all my cold weather gear and got all ready to go.  I did not want to go.  I wanted to rest and get some food in me (I was, after all, quite hungry.) But knew I always feel better after a run so out the door I went.

Within a few steps I could tell I was not going to run today.  I got to the other side of the street, waiting for the traffic to pass by, turned around and came home.  I was not running tonight.

I had written the mileage I was going to run down on my Strands account and all I had to do was but in the time and hit submit.  Now, I have started runs before that I cut short and simply changed whatever mileage I was about to enter.  But to come back and simply remove the entry all together was not fun.  It was, however, extremely intelligent.

My body was telling me NOT to run.  I did not push through, I did not “HTFU” as so many people like to say, and I did not do anything stupid.  Instead, I used my brain, took off my running clothes and sat down to an ab and core workout.  I got the sweat my body was craving without undue risk to my body.

I think sometimes people do not believe me in my seminars and speeches when I tell them I am not a high mileage runner and that if something tells me not to run, I do not ignore it and go for a run anyway.  My body is extremely precious to me: it is, after all, the only one I am getting.  No trade-ins and no re-dos.  I bristled this past weekend when a person walked past my booth, scoffed at my poster and asked “Why?”  I could tell the person was not one I really cared to speak to anyway so I simply said: “Why not?”  Their retort over their shoulder was simply: “Because I have no desire to destroy my knees.”

I wanted to say, “Believe me, jackass, neither do I” but I refrained.   I love running.  Some days it is harder than others to get out the door.  But I fully intend to be running until the day I die, hopefully decades down the road.  The way I plan on doing that is by taking care of myself and knowing when it is time to NOT go for a run.

I have been very fortunate that these “NOT” periods are few, far between and last for short periods of time.  However, for all of those out there suffering from injuries or setbacks, take heart that pushing too hard, when you know you shouldn’t, is neither intelligent nor beneficial.  If you want to get back on the road as soon as possible, sometimes that means not even getting on the road at all.

And my abs could always use the work.
Posted by Dane at 8:05 PM

I always wonder about these people who say running will destroy their knees. My knees are just fine, thanks!

My injury philosophy is: If the pain doesn't get any worse, I can keep running. If it gets worse, I stop.

Good for you, Dane. I know how hard it is to pull the plug on a run, but sometimes, it just needs to be done. And to the idiot who is afraid of ruining his knees by running...I hate that people continue to perpetuate that myth. Running is actually good for the knees because, well, they were actually built to run. Not to sit and do nothing. Not even to play basketball or soccer. Now those sports will damage a person's knees. I've been running fairly consistently since I was 12. I am now 45 (46 in 2 weeks). Exactly when will my knees be ruined?

Hey Dane!
We haven't spoken for a bit but Adam has kept me in the loop! I think you should try an ounce an hour for the day and call me in the morning! :0)
Have a great day! :0)
Tortuga!

The naysayers are always quick to condemn our running as unhealthy, we're blowing out our knees or hips or God forbid - we lose a toenail. Clearly that toenail alone is a message that we're not meant to run! Some of the same people would think nothing of their kids running off to play football, hockey or something else where they can really get seriously hurt.

Setting the ignorance aside however, there is some credence to what they say, the reality is there are people who go out and damage their bodies running. It is however for the very reason you have indicated in your blog, they ignore their bodies telling them they should not do what they are embarking upon because some training schedule says they need to "just do it" or they think they can tough it out. Wrong...

There is a subtle yet critical point at which a runner has to determine if the pain he's feeling is normal or not. I speak from experience. I ran on shin splints to the point that I actually had to quit running for quite some time. Luckily it's something that healed and I eventually started running again, but this time much wiser than before.

When I have an IT band that nags at me and continues to get worse to the point of being painful, it's time for some upper body work, ie time off feet.

So some people would question if this is "natural", and I say of course it is. Life is full of aches and pains if you live your life right (in my opinion), but if you listen to and treat your body accordingly it will reward you in return.

For example, how many times have you gone running and you get lost in the beauty of some place and slip on a wet stone or trip on a stump hidden by leaves and strain something? The threat of such things doesn't prevent you from going running, you doctor the injury appropriately and get back out there again.

I especially appreciate this blog Dane, it goes right to the heart of the issue of people who think we're crazy for running more than a few miles a couple of times a week (and there are plenty). When done right a person can run long distances their whole life and seldom, if ever sustain significant injury, but one must run smart and in tune with their body.

When someone bails out of a run because they are listening to their body, I never chide or judge them, nor do I pressure myself to get out on the trail again when I feel it's not time. Everything is a balance.