Fire in the Gut - Product Review

If you read my Miami Marathon report you noticed that I had to deal with one of my all-time nemesisesses (nemesisi?) in my trip to South Florida: humidity.

Humidity wrecks me.  As much as I am happy that I have the genetics to allow me to recover quickly from long runs and races I bemoan the fact that those same genetics turn me into a quivering mess whenever humidity strikes.  Sure, I have gotten better at dealing with the warm sticky weather over the years but with the amount I sweat, I am often left facing the reality that I am going to be a disgusting mess on days with weather with high humidity. 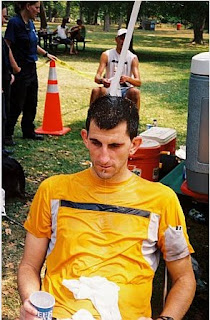 So, I usually have two options when it comes to such weather: run shirtless or find clothing that does what it can to help remove that slick layer of yuck from my body. Sometimes, due to logistics or common courtesy to those around me who have no desire to see me topless, no-shirt is not an option.  So one must find the right apparel. I was lucky enough to happen across such the stuff at the Carlsbad Marathon when I positioned across the aisle from Fire in the Gut. 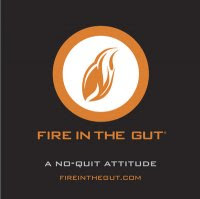 Designed by and sold by a former Navy SEAL, Tim Grizzell, Fire in the Gut performance wear is designed to sweat fast and dry quickly due to the fabrics which make up the product. (I link rather than tell you because science hurts my head.)  With seams relocated to places where other shirts aren't, it not only eliminates the rubbing together of those sleeves but also creates a snazzy look.  And as much as we would like to not admit it sometimes, aesthetics matter.

But what matters most is performance.  When Tim (who was a tall, gentle-looking man who I kept thinking could snap my neck at any moment if provoked) offered me a shirt to try, I was happy to do so.

I did not have an opportunity to give it a test run during an actual run in Carlsbad, mostly because it was so darn cold and rainy.  As such, I told Tim I would give it the ultimate test by taking it to Miami.

I have to admit I was pretty impressed.  As the humidity in Miami was in the 90% range for the entirety of my trip, I knew I was going to give this shirt a workout. Now, I will say this up-front: no shirt on the planet has been made to properly dispose of the gallons of water that pour of me on a hot day (or a cold day for that matter: case in point being when I ran the New Year's Eve 5k in Salt Lake City in nothing but a speedo and was drenched in sweat at the end.)  As such, it is a test of which will remove the "most" sweat from my body.

Running up and down the streets of Miami allowed me to give the shirt a full-fledged trial by fire (In the gut.  Ha! Sorry.)  It held up wonderfully, wicking sweat away from my body and drying rather quickly post-run.  And I looked good wearing it.  I actually wore it during the first day of the expo and realized how comfortable it was as a simple shirt as well (another great selling point).  With both men's and women's short and long sleeves available, this is one top-notch product.  Sure, some may find the apparel a little pricey but I have long felt that you get what you pay for in the running world.

So, give the website a look-see, especially the portion about how Tim and his company are Giving Back to a variety of organizations including the Challenged Athletes Foundation.
Posted by Dane at 11:29 AM

Thanks for the review Dane. Living in Arkansas I have to deal with high temps and high humidity from March - Sept/Oct.

Thanks Dane for the review - I'm know 'round here as the "Queen of Sweat", so I'll have to give thins product a try in New Orleans. I'll report back.

If they ship to Thailand, I'm in!