The other day when I was looking over some stats and numbers of my marathons run, I noticed a few discrepancies.  In my own personal spreadsheet I had noticed that for some reason I had placed some marathons I had run on the wrong day of the week.  I then noticed some of my times had never been updated to reflect my actual (chip time) rather than the gun time I had been given first. This led to an intense hours-long reshuffling of marathons and times until I finally had everything in its right place. 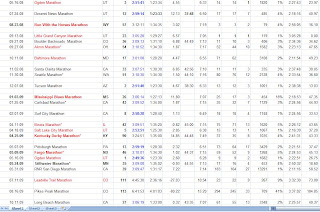 Actual spreadsheet. One of the less number-intensive ones.  Don't laugh.
While nothing major occurred (e.g. I did not all of a sudden find I had run a 2:19 and qualified for the Olympic Trials) a few interesting things did pop up.  First of all, I lowered my lifetime marathon average by 4 seconds.  Woo-hoo.  I also noticed that the Pikes Peak Marathon (6:41), The Dalian International Marathon (4:40, where I ran in China with the stomach flu) and the two runnings of the Leadville Marathon (5:17 and 4:45) so skewed my entire marathon average that removing just those 4 from the 113 marathon sample size, lowered my entire average by over FOUR MINUTES!  You know some slow times come from a race where 4 in 113 have that much weight. But there was another finding which will effect what I am running this weekend at the Cowtown Marathon in Fort Worth, Texas. 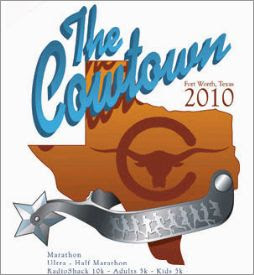 What was this finding?  Well, you may have read previously that I like to entertain myself on marathon runs where I am neither running for myself, charity or as a pacer, with a variety of methods.  One is to knock off as many individual minute goals as possible.  By that I mean, I want to run a 3:05 and 3:06, and 3:07, etc.  In 2009, as he year drew to a close, I used some marathons as training runs to cross of a 3:15 and a 3:20.  In my first double marathon weekend ever this January, I followed a 2:59 at the Mississippi Blues Marathon (a time I have run on numerous occasions) with a 3:17 the next day at the First Light Marathon (the first time I had ever run that time.)  As I approach my 204 mile run, most of my marathons (and everything else for that matter) are "training runs".  I had thought I had both a 3:21 and a 3:23 to knock off leaving me with only a 3:02 s the sole time not run from 2:58 all the way to 3:32. (This is what happens when you must entertain yourself on long airplane rides alone.)

Now, this worked perfectly.  I could run one of those two slower times at Cowtown and then the other at Georgia Marathon right before my 100 mile run at Umstead.  Only problem was that all my refiguring of stats revealed something:  I had ALREADY run a 3:23!

"One is to knock off as many individual minute goals as possible."

I have never heard that one before, but can see how you can get OCD about it (I'm a number junkie myself)

How fun, Dane! Not sure what the Cowtown course is like, but you might want to save the 3:21 for ING GA as it is a very hilly (relentlessly hilly) course. And you need to let me know when you get here!