So, I took it easy at the Miami Marathon. It was a hot and humid day and although I wanted to go faster, I used my head.  I ate well after the race at a wonderful dinner with my friend Coach GP and was making sure to take it easy this week.

Then I woke up Wednesday morning, looking forward to a nice easy 9 miler and realized I wasn't doing 9 feet.  A stomach virus laid me out for the entirety of Wednesday.  And by entirety I mean I woke briefly at 9 AM, 1 PM and 7 PM to try and get a little something done in preparation for leaving Thursday afternoon, but spent the rest of the time either in the bathroom or sleeping.  Completely bereft of energy was I.  It is nice to get reminders like this that even the best laid plans can go awry.

But here on Thursday morning, I am feeling "better".  Not great but better.  Better as in I am still going to the race and going to compete.  Yesterday I had no idea whether that would happen.  But today, the Rocky Raccoon 50 calls and I am answering. 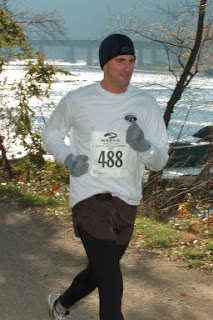 This was just one month after my last marathon of 2005 and was my last race in preparation for my 52 Marathons in 2006.  I had only once gone over 26.2 miles in my life prior to this and that was at the 12 Hour Presque Isle Endurance Classic two years prior.  I did not get the time I was hoping for at this race, perhaps biting off a little more than I could chew in the first 16 miles of the Appalachian Trail.  I had heard you wanted to get out fast as to not get caught in the conga line of runners and probably went out too fast.  Plus my trail running experience was slim to none. 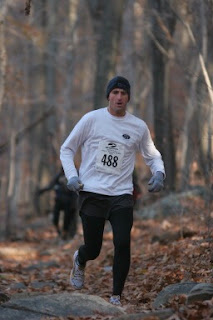 But I finished with a respectable time of 8:32:57 for an average of 10:14 per mile and was in the top 100 (97th to be exact).  At the Rocky Raccoon, if this stomach holds and the trails dry up from the rain they have been getting this week, I plan to go much, much faster.

Good luck I'll be running the 100 miler so Yell at me as you whizz by!

I know you will be hugely successful!

I look forward to seeing you and to getting passed by you multiple times this weekend:-)

Hey Dane, I hope that you are completley recoverd by the weekend for the Rocky Racoon 50.I have had to do a few runs (no pun intended) after a stomach bug,it did not seem to affect me to much just felt a bit sluggish and tired. Good luck my friend, be careful and stay safe. Trevor, (England)

Hope the run is going well. We had the 50 planned as well but the blizzard has canceled all flights and is keeping us hunkered down in Arlington.