Half is Not Less

For quite some time I have spoken to scores of runners at races.  I often ask which race they will be taking part of and far more than I would like to hear, I get the response: "Oh, just the half."  I ask them to do me a favor and strike the word "just" from their vocabulary.  Unfortunately, the half-marathon exists solely as a race that is part of the granddaddy of all races - the marathon.  It doesn't even have its own name but merely "half" of something else. Never mind that the race is 2.1 times larger than the 10k or 1.4 times the length of a 15k.  It has been relegated to "half" status.

Fortunately, there is a new race series out there which is trying to rid this wonderful distance of that stigma.  It is called the 13.1 Series.  With 8 races, this inaugural series of themed half marathons "will be serving some of America's top running communities with a stand-alone half marathon for locals to embrace and visitors to experience."

Obviously, there is little doubt that I love marathons.  I have run 114 of the suckers, after all.  However, while I have run far, far less of the race with "only" 13.1 miles to its credit, it has always been a race I have admired for its ability to still test one's endurance while also allowing you to not walk like this the next day. (Stick around for the nipples.)

Which is why I am honored and fortunate to have been asked to be the featured speaker at the 13.1 Miami Beach race this weekend in sunny Florida.  With a course that starts on beautiful Miami Beach, gives runners a little taste of a hill to use different leg muscles, doubles back on itself so runners of all speeds will get to exchange greetings and then ends on the beachway promenade, I am having a difficult time finding a flaw! 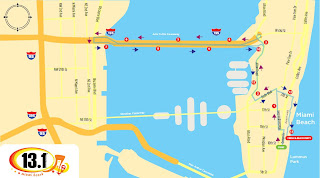 There are still spots available for either the 13.1 one race or the new 5k.  Click on the logo below to register.

Also, stay tuned here for even more information with my participation at this series as the races continue to grow!
Posted by Dane at 8:52 AM