With a 100 miler in one week, a 204 miler in one month and an aching left calf muscle, I have decided that right now is the time not to run.

Yep, I am now on my 6th consecutive day of not running.  I haven't gone that long without putting on running shoes for a run since I was hit by a car while cycling in August and had a forced lay-off. However, after winning the iron Horse 50 Mile Race a month ago, I have been experiencing a trigger point in my calf muscle that has just left me quite unhappy. 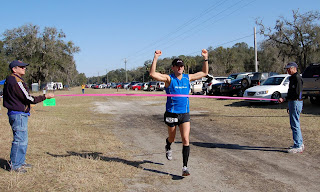 I downgraded to the half-marathon this weekend at the ING GA Marathon ((which was probably a good idea anyway with the 100 next week).  I have massaged the heck out of my calf.  I have basically lived in my Zensah compression socks and sleeves.  But I am going nucking futs.
Almost thought I swore there, didn't ya?  Well, that is how I feel.  Like Swearing. Logic tells me that no running I will do in the next week will help me all that much for the 100 miler.  I am even fit enough to have a good run by now or I am not.  In fact, running now may just hurt me.  But it is not logic that is permeating into my mind.  It is the feeling that the year of traveling and eating bad fastfood jammed in my throat late at night when that was all that was available after a day at the expo is going to catch up to me.  That running when I could in between engagements was not enough to actually do well in this race.  Lots of fears and worries that people do not believe you still have after 114 marathons, a 50 mile course-breaking record, a solo running of a 100k relay race and everything else.

But believe me, all these trepidations and fears still exist.  If anything, they are amplified because I never hide my dreams or goals or races.  There are very few "sneakathons", which is what my friend calls races where we tell no one we are entering.  My success and failures are out there for anyone to applaud or point at and laugh.

And I am OK with that.  But man I wish I was running.  At least I will be running tomorrow, even if it is on the notoriously tough ING GA Half-marathon course.  I fully intended to go MUCH slower than I did at either the 13.1 Miami Beach or the Sarasota Half Marathon. We are talking much closer to 1:35:00.

Stay tuned for a leg update and keep your fingers crossed!
Posted by Dane at 8:13 AM

Keep the faith! I'm sure good days are gonna be back again soon, with the 100 coming up :-)

Are massages part of race crew duties? I might need to start thumb workouts!

It is refreshing to see that you are human like the rest of us and have your fears and lower points. I appreciate your honesty, and from meeting you know that this slight setback will only make you stronger in the future. God speed in your recovery and good luck in your upcoming 100 miler.

You are an incredible athlete and despite the injuries you remain strong and still do well. Keep it up!