Well, that was humbling.

I have been trying in the past few years to integrate swimming back into my exercise regimen.  In 2008, I swam a little bit on my way to doing surprisingly well at the Deer Creek Tri in Utah. 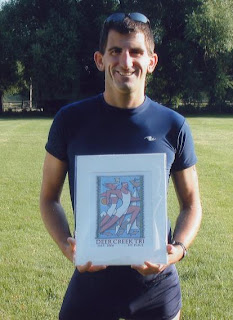 Last year I ramped it up a little more and even though my swim leg was not what I wanted it to be at the US National Aquathlon Championship, It was nice to be cutting through the water again. 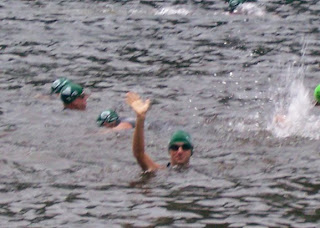 Then I got hit by a car. So with a messed up shoulder, I wasn't swimming much.  Then I got uber busy with running and swimming slipped further down the to-do list.

However, with my legs needing a little break and me actually being home for more than 3 consecutive days for the first time since, yep, 2009, I decided to grab a monthly membership to the local pool and make some waves.

Runners, if you think downtime from running is bad, be it from injury or just taking some time off, I can attest that it is absolutely nothing like the lag that swimming does to you.  When I dipped my toe into the pool the past two years, I expected creakiness and flailing- heck I hadn't swam in eons.  But I did not expect it to be this hard to do a nice 2,000 yards in 30 minutes.

Then I remembered it had been 8 months since I had been in the pool for one single lap.  I was dealing with a shoulder which just did its first crawlstroke in 241 days.  And swimming humbles you like few other sports.  Then I realized (as I let the mind wander somewhere around the 1,500 yard mark) that with my 34th birthday looming, I am now officially DOUBLE the age I was the last time I had an actual competitive swim meet.  Holy mackeral! 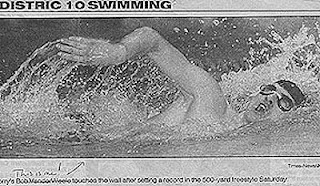 When I meet other runners at book signings and the like, they often ask my age either presently or when I did the 52 Marathons. When I tell them I am 33, they say "Oh, you are young!"  Well, it is the oldest I have ever been!  And I was thinking that as I went up and down the pool far slower than I thought was.  Or more accurately, at the speed I thought I was swimming but with far too much energy spent to get there.

However, there is something fun about smelling like chlorine, having yucky hair and realizing that it is going to take more than just two 2,000 yard workouts in two days to feel like a swimmer again.  I enjoy the challenge and while many dread the pool, I think it is a treat.  And since I really am trying to baby my tired legs, this little stint in the deep blue should be quite enjoyable.

Now, I just need to find a suit that covers my paunch.
Posted by Dane at 6:54 PM

I swam through college. All I can remember is coming back from trying relax during the summer towards jumping into supposed to be an easy 4000 only to feel like my arms were going to fall off. I still don't know how I used to make it through 8 thousand yard practices. And that was less than two years ago.

If you get sidetracked from running for a week or two, you can regroup fairly easily. You take two weeks off from swimming and you need another month to get back into the swing of things.