A run through Matheson Hammock Park

In my travels, I usually happen across a unique or unusual place to run.  Like Teddy Bear Park in Stillwater, MN.  Or Antelope island in the Great Salt Lake. Or South Mountain in Phoenix, just to name a few.

Lately with my schedule of speaking and doing book signings at expos, I rarely have time to venture out of whatever convention center I am at and if I do, I don't go too far as I have either just finished, or am about to run, another marathon or ultra.  It doesn't matter how many marathons you run, 26.2 miles is never "easy" (at least to me.)

However, as I am venturing on some short distances half-marathons the next few weeks, I can be a little more adventurous with my running.  And as luck would have it, I happened across a wonderful little run today here in South Miami.


After falling in love with the show Dexter and having only been to Miami one time previous to watching it, to me Miami is “Dexter”.  (At some point this weekend I am going up to Dexter’s home and getting a picture.  But I digress.)   So now when I run, I think “ooh, did they film that here” or “was that where the limbless body was found?!”  Then I remember the show may be set in Miami but chances are they film everything back in LA and my hopes and dreams are smashed. 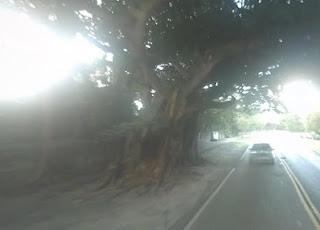 However, when I began to venture down a street toward a park I just had looked at on Google maps as a place to run for a smidgen before turning around, I felt like I was really in Miami.  This street just oozed of South Florida with gorgeous homes in yellows and pinks. These colors are everywhere here on the houses of the wealthy but would be considered tacky anywhere else in the country.  The streets lines by enormous trees with vines and plants that simply screamed I wasn’t in the Mountain West, the Pacific Coast or the Mid Atlantic. 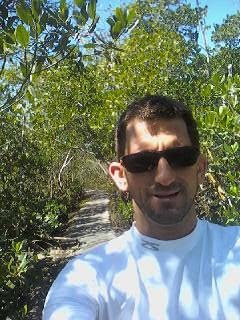 When I turned into Matheson Hammock Park, I had seen from the maps that it was a narrow road with more trees on either side.  However, I had not seen that there was a bike path on the one side that would allow me to skirt the road and run next to it.  But here, the trees leaned in, the brush became nefarious in how it almost seemed to be hiding an alligator ready to pounce and I loved every minute of it.


Nearing the turnaround point of my run, the trees quickly gave way to a marina and a beach,  One or two palm trees dotted the shoreline behind me with Miami Beach about 15 miles north of me on the horizon.  I had to snap a picture. 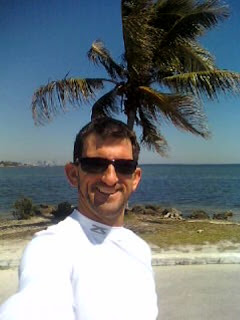 I had started the run still nursing calf and shin pain.  Ironically, I got those pains winning a 50 miler here in Florida a few hours north and a few weeks ago at the Iron Horse 50 miler.  However, as often happens, when I run, the pain goes away.  Even if it hadn’t, this little jaunt through the park had me thinking of nothing else but enjoying the wonderful surprises that running somewhere new can provide.

This would be about the 1,634th reason I could give when people ask me “Why do you run?”  But I realize they don’t really want an answer – they just want to justify why they do not.  And you cannot justify it after showing what lies in store for you when you simply “left, right, repeat.”

Glad to hear that you were able to enjoy the area by going for a run. I always find it the best way to see a city and take every chance I get to explore via running.

I am so happy you enjoyed your time in our area of the world. You certainly were impressive in your description of the beach where I grew up in. Thank you.