Reducing the Difference in Boston Qualifying Times Between Men and Women

A recent discussion on a running board sparked a debate about how the time standard between men and women in qualifying for Boston seems way out of whack. At 30 minutes (full times for males and females are listed here) the times seem a little out of touch with the fact that the normal winning times are usually separated by less than 20 minutes and the world records are just 12 minutes apart. 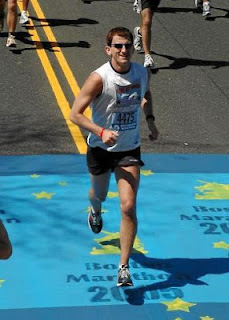 Boston did make the qualifying times harder and they go into effect fully for the 2013 race. I feel pretty proud about that prognostication. However, the disparity in times between males and females remains. When they made the changes to make it harder to get into the race, I think it was the prefect time to remedy the error of thinking that females need to be coddled more. 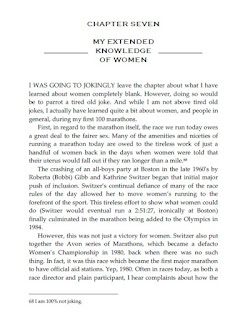 In my latest book, I talk about the things I have learned about women in my first 100 marathon. One of the things I touch on is how good women runners have become. When given the time and opportunity to excel, many of them do. Shocking! As such, the need for this gloved approach to female runners is rather insulting actually.

Are there general differences between the genders that call for a necessity in a difference between qualifying times? Absolutely. Just not this wide gap that currently exists. Perhaps there is evidence that exists that the median times call for the 30 minute gap.  But I tend to believe that if it were 25 minutes, or even 20, women would step up their game and men would love that they did.

It was Kathrine Switzer herself that said the most welcoming people at the Boston Marathon on her historic run were the other male runners she decided to run with.
Posted by Dane at 4:24 PM