Ultrarunning Matters (and will an Ultra ever be in the Olympics?) 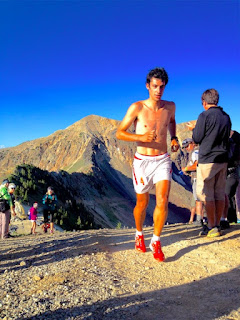 This weekend the Speedgoat 50K was held near my last place of residence in Sandy, UT. A veritable who's who of ultrarunning was there with names like Kilian Jornet, Max King, Anton Krupicka, and Rickey Gates on the men's side. The women's side, while not necessarily as star-studded, contained a talented group of ladies with Anna Frost besting the competition by over 30 minutes.

However, a slight bit of controversy cropped up at this mountainous 50K. Kilian Jornet was the first to the finish line but it became clear that he and a few other runners may have cut some of the switchbacks in the course. Something completely allowed in European trail running, it is, for the most part, all but enough for a disqualification on any race on U.S. soil. To be clear, it appears that Jornet might not have been aware of the rules with regard to the race, which left RD and amazing trailrunner himself, Karl Meltzer with a difficult task. In the end, it appears Meltzer has awarded a tie for first place between Jornet and second-across-the-line Rickey Gates, giving Gates the actual prize money for the victory.

So much has already been said about the decisions made my Jornet, Meltzer, et. al. on the iRunFar recap page here and I am adding nothing more to that. What I am talking about is how happy I am that so many people are actually talking about it. 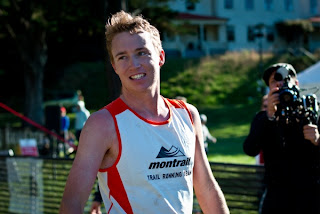 Ultrarunning used to be a sport of a handful of extremely hearty (mostly older) (mostly male) folks with almost no recognition and even less sponsorship. Well, that's not entirely true. ultrarunning or ultrawalking used to USED TO be a sport where there was considerable attention paid to these events which would be done around inside tracks with copious amounts of betting and wagers being placed. Then it went farrow as baseball and football took over. THEN it became a sport of mostly old men.  But I digress.) Now, runners of ever increasing youth are populating races which sell out in minutes where the winners take home thousands of dollars. This is simply fantastic. It also, in light of the current Olympics, brings to mind a conversation I had with some elite ultrarunners a few years ago about the possibility of an ultra ever making it to the Olympics.

This doesn't seem as far-fetched as one might think, especially if we think about having the race run during the Winter Olympics. As the Marathon itself is the focal point of the Summer Olympics (not necessarily in popularity but it is the finale of the games and the reason they even came into existence), it is hard to see an ultra ever cracking into those games. But in the Winter Olympics? Maybe.

The Winter Games always seem to be the proving ground for some more eccentric sports and where else would an ultra feel most at home but amongst them? Stealing a page from the longer cross country skiing events, an ultra could definitely take place in a looped course providing spectators on the ground (and television viewers at home) the chance to see the race unfold without having to traverse massive distances. This looped course aspect proved beyond pleasing to spectators at both the 2008 Olympic Marathon trials held in Boston and New York and the 2012 Marathon trials held simultaneously for men and women in Houston. The only question remaining would be what distance for an ultra.

Personally I think the 50 mile distance is ideal. "Only" doing a 50k would have many people claiming that it is only five mile longer that the marathon and the difference would be negligible.  (N.B.: This article is overlooking the 50K racewalking event in the Summer Olympics, not because it is not something to be noticed - the WR is a sub7 minute mile, which is amazing -  but rather to concentrate on running events of greater distances.) But if we nearly double the distance and a whole new race has been born. A 100 miler or even a 100k might not would work, simply because of time constraints on the attention span of television watchers. Of course the question remains for an ultra of whether a television watcher even stay around for the full 5-6 hours it will take the elite runners to run the 50 miler? Perhaps not. But they don't have to. 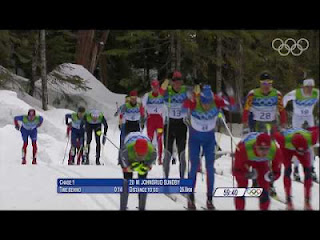 This longer time frame will allow many who wish to watch from the beginning and many others to hop in and out throughout.  Americans routinely spend a solid three hours watching an NFL game. Then they do it again, sometimes twice on playoff weekends. It is not hard to believe they could be enticed to watch something for a few hours, watch another event and then tune in to the end of the race to see where everything is shaking out. I fully envision, just like in cycling or, again, in the longer cross-country skiing, a leaderboard with chase packs being designated as being +1:20 behind or something along those lines.

Over the course of many hours the drama that develops will bring many in and will also allow viewers to get to know the runners. Six hours is a lot of time to fill with commentary and if there are interviews with the runners, with backgrounds and personalities poking through, these runners can become more than just a number. Story lines can develop, fan favorites can be created, and the next line of ultrarunners can be watching and planing their own first ultra.

Staging it during the Winter Games might make it more difficult on the ultrarunners than necessary, especially if it gets a little cold and too much bundling up might take away some of the individuality of each runner.  However, bad conditions and near symmetry amongst the looks of competitors doesn't stop the Tour De France from taking over televisions every year in June and July. And if there is a group which handles adverse weather conditions, it is ultrarunners (e.g., Badwater, Arrowhead 135, et. al.) (As a side note, holding a multi-day stage event ala the TdF over the course of most or all of the games would also be something to think about. The Decathlon is not decided in one day, nor are all the heats of the various track and field events.  Stretching one event over seven days would allow even more time to get to know the athletes involved.) 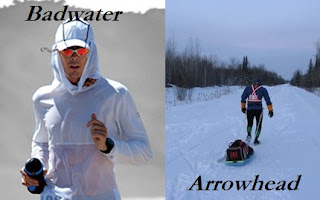 All told there is much to be worked out and I have only scratched the surface. But with all the hubbub that was percolating over the SpeedGoat race this past weekend and the Olympics on the tube, I couldn't help but think that soon an ultra might make its appearance in the Winter Games.

At the very least, the time is now for there to be a National Championship event which brings together all the amazing talent out there running on all different types of surfaces and terrains.  There could even be something akin to the tennis grandslam with some runners being road specialists, some being mountain experts and still other prevailing in deserts or muck. If it makes sense to have court, clay, and grass in tennis, then it makes sense to do the same with ultras.

The sport simply needed an influx of young talent, a passionate fanbase, and the ability to disseminate information about the race in real-time.

Nice write up, and agreed, Ultrarunning does deserve the attention. It's good to see it matters to so many people.
http://runrunnerrun.blogspot.com/

If you could see my face in the picture pulling the sled at Arrowhead you wouldn't be able to tell I'm blushing because my face was FrOzEn!!! Hahaha

You make a good case. I'm nowhere near an ultr arunner, however, I know me and my friends would watch. I've been wanting to see an ultra unfold for some time now, I'm sure there's tons of others out there.

The winter games is a brand new idea and I totally like it. 50miles may be popular in the US or UK (and whoever uses miles for distances). Yet I think that 100km or even a multiday race might be better.

About the price money: I dont know if I like it or not. Money and sports is like water and electricity.

While I have no objection to there being Ultras at the Summer Olympics, I think unfortunately it all depends on the money to to made by doing so, and think it isn't mainstream enough, in enough countries to be popular

I also think that the rules need to be standardized as if a cours ehasn't got a flag to force you to go that way, you shouldn't need to folllow the path, unless the race rules for the particular event dictates otherwise. This is fairly normal for each race to have its own rul s, so anyone not following the correct course should be DQ'd

I thought USATF already has an Ultra event that acts as National champs and USA team selection ?