No Respect for Olympic Marathoners

When I was doing research for my book, 138,336 Feet to Pure Bliss, I came across one unassailable fact - organizers of events often have their heads firmly placed directly up their butts, at least when it comes to the marathon on the grand stage.

Time and time again, the marathon, an event which has to be the most grueling held in the Olympics every four years and is treated as its cornerstone event (quick history lesson: the Olympics exist because of the marathon) is handled with all the care of a bull in a china shop. 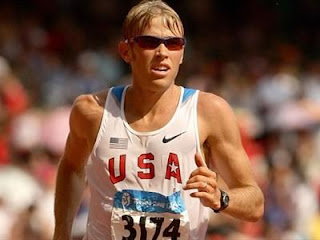 Lest you think I do not understand economics, let me lay that to rest here at the beginning. I understand sponsor dollars pay for events and viewers have to be able to watch the event in order to convince sponsors to pony up their dollars. I also understand that events worldwide are slated to fit into the best Must See TV timeslot and athletes are just pawns in that game and the Olympics are not alone in this game (e.g., I would love to have the skill to play in the NBA as the constant night games fall right into my circadian rhythm but I bet many players would much prefer to play a game at noon or 8 AM.) However, when an event is going to take two hours, completely exposed to the elements, being run at speeds around 13 mph on average, perhaps we should throw a bone to the runners.

Yet, looking at Olympic Marathon history, no bones are thrown. From races run in the heat of the day, to runners having to run behind horses or cars kicking up soot and dust and exhaust, no quarter is given. Fortunately, when heat, humidity and pollution concerns wracked the most recent Olympic marathon in Beijing, they had the foresight to do the best they could by starting at 7:30 a.m. 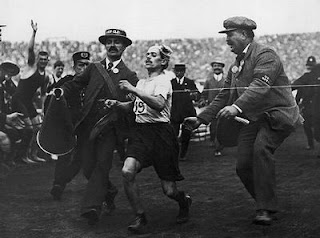 But in London in a few weeks, the race will begin at 11 a.m. As Amby Burfoot writes "August is the hottest, sunniest month of the year in London; both previous London Olympic marathons (1908, 1948) were held on days described as 'hot and muggy;' and both resulted in on-the-track collapses by an obviously depleted race leader." Yeah, I see no reason why we shouldn't start it as close to possible as to when the sun is at is apex.  Should be no problems.

Without a doubt there are reasons I am not considering as to why the race is starting so late - there are always "reasons". There is also a little bit of crankiness on my part as, if I wish to watch the marathon live, being that I live in the Pacific Time zone, I will have to get up at 3 a.m.  Ouch. Actually, given I am a night owl, I will just simply stay up another 30 minutes more than usual. Now it doesn't seem as bad.

Let's just hope for some cool temps for the runners.
Posted by Dane at 10:30 AM

It's England... there's probably a reasonable chance of rain, ha