Many friends have known for quite sometime that I had something up my sleeve for the 2008 Boston Marathon. However, until I had all my ducks in a row, I did not want to reveal my plans. Now that everything is lined up, I will finally spill the beans.

If my review of Dave McGillivray’s Book HERE inspired you to purchase and read it, you would have learned much more about Dave than the few things I said about him there. One particular thing about Dave caught my interest a few months ago. You see, each year after the running of the official Boston Marathon is long over, Dave heads out to Hopkinton to run the course alone. He does this in order to keep a personal streak of running Boston alive. He has been doing this for years now. So in other words, he runs the race and then he runs the race!

Well, I thought that it would be a wonderful personal experience to accompany Dave on his run. To see what “Boston” is like after the race would be rather surreal. No screaming women at Wellesley; no crowds of thousands lining the streets; no support tables; nothing that the average person experiences at Boston would be there for me to see. Heck, I am pretty sure we have to wait for traffic too at all the lights.

Now, while this is something that I think will be quite neat and I hope to possibly learn so much more from Dave on the run, I knew I could not just go to Boston for this alone. Having moved to Salt Lake City, I can’t just hop on a cheap flight from BWI to Boston for $120 bucks. No, I have to shell out significantly more to fly across this entire country. As such, I had to make the trip more worthwhile.

As such, I will toe the line as a Boston competitor just like over 20,000 other runners who have worked hard to get there and run the race. Then I will grab a quick shower, hop in a van and go out to do it all over again just a few hours later with Dave.

One marathon and one 26.2 mile recovery run.

Having come off a full straight month of travel and having an overseas trip following right on the heels of this trip to Boston, there are probably MUCH better days to do this. But I have no idea what 2009 would hold. And I realized that it was hard to believe that it had been three years since my last trip to run Boston in 2005. 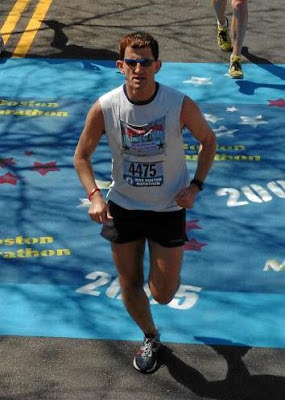 This is a great plan, Dane, and I know you'll have a blast running with Dave. Can't wait to hear about both Bostons!

PAm Reed's been known to do this--run Boston out and back, so keep an eye out for her! Good luck!
--Amy

I'll see you in Boston! Rachel

Great plan! Look forward to the "after" report.