As odd as that sounds, let me explain. Fate had me coming to DC this week and my good friend Jay Wind, a local running aficionado, asked me if I could help him make the 5th Annual Potomac River Run Marathon the best one yet. I jumped at the opportunity and soon was knee deep in the preparation for one of the races that holds a special place in my memory. 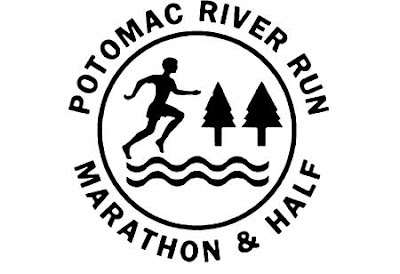 The Potomac River Run Marathon is one of the marathons that I ran as part of Fiddy2. That alone does not make it special per se. What does make it special is that it really solidified in my mind that I was going to be able to continue to push myself throughout the year and not only give close to my best every week but possibly set a new personal best.

You see the race is a 10k course that the full marathoners run out and back twice. Snaking along the Potomac River through Virginia, runners are treated to a slightly challenging courses with a wonderful view of the river here and there, all while running on a winding bike path that keeps your legs from ever getting too bored.

It is not an easy course and not nearly as flat as one would think it would be so close to the river. But I would not call it hard either. I would call it one of my favorite marathons. The opportunity for spectators to easily pop in and out of the trail makes it easy for your friends and family to cheer you on 3 or 4 times on each 10k without much trouble at all. It was my best friend Anne's cheering that undoubtedly helped me uncork a 3:14 here in 2006 in my 18th straight week of racing (when my PR at the time was only a 3:07). At the time it was my best race of the year and really solidified, in my mind, that I would eventually go under 3 hours for the year. 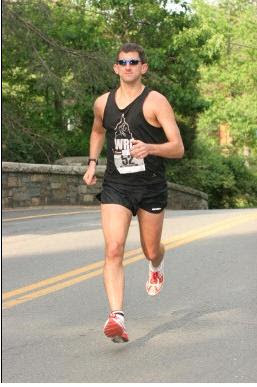 I needn't bore you with the minutia of setting up a course play by play, but without a doubt it was an interesting experience. I have been the race director for my own marathon, have worked in various capacities on numerous other races of all sizes and shapes but working on each race presents new challenges and surprises.

Jay is a wealth of information on just about any subject and it was wonderful to exchange banter on all types of ideas. Jay was and still is a helluva runner. His personal best of 2:27 came at Boston in 1980. If that time doesn't ring a bell, or you are not up on your marathoning lore, that is the year Rosie Ruiz cheated to "win" the Boston Marathon. What was more interesting is that given his time, Jay finished very close to the REAL winner, Jacqueline Gareau. In fact, Jay had a conversation with her shortly afterwards (in French by the way; Jay has more talents than I can list) in which she was still confused as to how she had taken second to someone who she had never seen throughout the race. Quite an interesting tale indeed!

One interesting note for me was that I was able to mark the course with mile markers. As one may know, a course must be certified (as this course is) but mile markers do not. If you have read my recaps previously, you know how often I am perturbed by mismarked mile markers. Therefore, I took this job extra seriously. Not only did Jay and I do a number of calculations to make sure that the miles should be marked down to the exact foot, but I TWICE ran the course pushing a marking wheel to make sure each mile was correctly placed. Ten the night before the marathon, I once again went out and marked each mile with signs that not only told the runners where each mile was but reminded them it was World Laughter Day!

When I got back from the last marking, the speakers at the expo were just about to wrap up. However, one of their key speakers was missing and they had some time to fill. I offered my services and minutes later, my sweaty self was standing in front of runners who were eagerly interested in the guy who had JUST got done running the course. As Jay also introduced me as the man who ran 52 marathons in 52 weekends, I was also able to talk more about my work with Fiddy2 and how I was still accepting donations as I tried to get to that $52,000 goal I had set for myself.

The next morning came early as Nick, the gentleman doing, amongst other things, the timing for the race, drove me down to the course at O Dark Thirty (actually 3:45 AM) so we could begin preparation for the race. With nary a hitch we were ready for the first wave of early starters to go off a little after 6 AM.

Let me be clear here; a bevy of volunteers were helping Jay and and the rest of us. It was their hard work and dedication that made so much up to this point a snap. As the race started, we knew the worst was out of the way. I spent the rest of the da driving Jay's van up and down the course, delivering extra water and cups to the aid stations or lending a hand where I could. Once a bulk of the half-marathoners were finished and the load on the aid stations was lessened, I was able to head back to the finish and help announce finishers, work on entering data and doing whatever else was necessary.

There were a hundred great stories throughout this such as the runner who took second overall in only is second marathon ever. He dropped his time 30 minutes from the Marine Corp Marathon in the fall to run a 3:04! Absolutely stellar!

Then there was the last finisher of the race who motored down the last quarter mile to a battery of cheers as her friends and family screamed her on to the finish. Presenting her with her medal and then removing the chip from her shoe, I was hard pressed to not grin like an idiot in complete exuberance of her triumph over the 42 Kilometers she had just conquered. While most of the runners had left the beautiful Bell Haven Park finish area, she stayed around for quite some time, rightfully soaking in the sun and enjoying her moment. 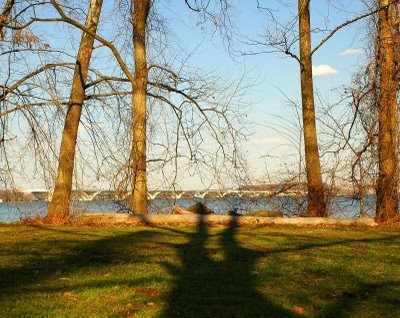 All in all it was a wonderful experience for everyone, I think. I cannot think of a single thing that really went wrong. This is a testament to Jay's preparation and many, many people who really poured their heart into making this a wonderful race.

Here's hoping that the next year finds you running down towards George Washington's Mt. Vernon and making your own memories in the Potomac River Run Marathon and Half-Marathon!
Posted by Dane at 7:05 AM

You did an AWESOME job with the wheel (and or run), Jed.

This was my first marathon (actually first race) and I absolutely loved it. Thanks for everything guys. And thanks to the half-marathoner who let me pace off with her for her entire race. Great organization.

Awesome recap. I'm running it this Sunday (my first half marathon) and reading your experience from last year was great.

You running it again this year?