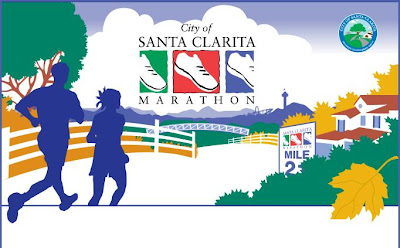 Having raced 7 straight weeks in a row, I have to admit I was quite tired going into this race. I was half-hoping to make a shot at the top three but knew my efforts hinged on how quickly and fully I was recovered. Regardless of my energy level, the Santa Clarita Marathon would not wait.

I knew in the few days prior that chances were slim to none of feeling good enough to go sub-3 but that did not hinder me from hoping so. At the speech I gave at the expo, some of the listeners questioned whether I was racing and if so, what I was hoping to run. On the spot, I said if all went well, I might give Chuck Teixeira a run for his money.

At the end of the speech, a couple who was involved with the organization of the race, told me they knew Chuck and would introduce him to me at the start of the race.

Race morning:
Staying in a hotel just one block from the race's starting line was like heaven for me. A 7 AM race time meant I would not get up until 6 AM, at the earliest. I finally sauntered down to the starting line at 6:52 AM. I am not a warm-up kind of guy and an ideal marathon start for me is to show up 30 seconds before the race and go. However, I wanted to me Mr. Teixeira. At the starting line I was introduced to Chuck and we talked until just before the gun was fired. An absolutely stunning rendition of the Star Spangled-Banner was performed by a local singer. It was so phenomenal, that even after hearing it at some 100 races in my lifetime, it actually brought a little mist to my eyes. I blamed the humidity. Speaking of the weather, cool temperatures and a cloudy sky which were still forecasted just minutes before the start of the race did not stay around very long. Warmer than ideal (for me) temperatures prevailed as did a sun that broke through the clouds far more often than my tastes would like.

What was most odd about this stretch was that no matter how hard I felt I was pushing myself or how much I backed off, I more or less ran the same times. I finished the first half with a string of 6:59, 6:57, 7:12 to put me at 1:30:30 for the half. Feeling quite tired, the sight of all the half marathoners turning right to finish in 3 blocks was a sight my weary eyes did not need to see.

While the first half of the race was punctuated by the feeling that no matter what I did, I was going to run the same times, this little section was exactly the same but with the times just skewed a little slower. The next 8 miles had me running virtually identical times with a 7:17, 8:08, 6:21, 7:16, 7:16, 7:20, 7:26, and a 7:40. (Ignore the 8 minute and 6 minute miles. Obviously the marker was askew but the average of the two equals out to be right in line with everything else).

During this section I had a vague idea of my placing and figured it was in the teens somewhere. I saw Chuck on a few occasions just churning away and slapped him a high-five each time. Every so often a runner would appear in my sights and I would slowly chip away at his lead until I passed him. One or two runners passed me but soon I made up the ground and left them behind again. 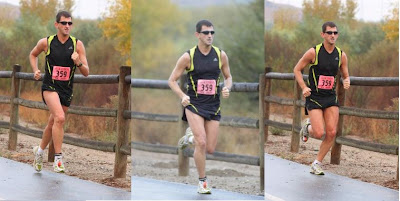 The sun would intermittently burn off sections of the clouds and beat down but it was nothing horrible. That said, it was tougher than ideal for sure. The vast majority of this race was run on or along a bicycle bath that wound all through the Santa Clarita area. Without a doubt, if you did not run the tangents, you would easily add a mile to your overall distance. But the course was very enjoyable and never boring as the tree-lined sections provided shade from the sun and the foliage was in full autumn mode.

Final 5 miles:
On the final out and back portion of the course, I spied a female runner not too far behind me who had previously escaped my view. I guess she had been too close on the other out and backs for me to see her heading out. She was motoring very well and I fully expected her to pass me in not too long. I then saw another female who looked strikingly familiar. I learned later it was a friend of a friend who I had conversed with a few times online previously. Small world indeed. Laura is her name and she would end up as the second female overall. She is also ridiculously ripped, nay shredded. I do not even want to know what she has to do to maintain that physique as I know I will never personally follow suit!

A slight side stitch had come on and I was just wishing for it to go away. The course was not a tough course but its elevation has just enough undulation to wear you out in the end.

While there was little crowd support on the course itself, that does not mean there was no cheering and enthusiasm. I lost count (and definitely need to inquire with the Race Director as to how many there were) but I think there were 20 separate aid stations along this course. Granted some doubled their duty on the out-and-back sections but that still counts. There was plenty of liquid to be had by any runner. In addition, a vast majority of the aid stations were staffed by younger kids. Besides getting children involved with a race for the benefit of the runners (I will gladly take a liquid from any volunteer, but there is something about grabbing a drink for a wee one that gives me a huge smile for 100 yards), the added incentive for the kids is to see how fun physical fitness can be, which will hopefully make great leaps and bounds towards helping the ridiculous obesity epidemic in our country.

*Steps off of soapbox*

During the last .2 of the race I almost took out an absent-minded pedestrian who decided that the moment I came barreling around the corner was the absolute best time to cross a street, on the corner, 50 yards from the finishline, without looking to see who might be coming at her.. I know a little Newtonian physics and was aware that two bodies cannot occupy the same space at the same time. As I was now full-tilt sprinting and weigh ~175 lbs, I knew that *I* would be the one occupying aforementioned space as the lithe pedestrian blissfully ignorant to her imminent trampling was in no way going to impede my running. With all the energy I could must, using the quickest amount of time possible, I simply bellowed:

"MOVE!"
hoping the sheer sound would scare her back on the curb. It worked.

I passed underneath the clock in 3:07:59 for 11th place overall. Chip times later show I had a little more leeway (3:07:51) but the race photo should be dramatic!

I was quite pleased with this race. It was very well put together and very spectator friendly. I saw some people who made the effort to cheer on their runners like 4 or 5 times at least. With its looping course and out-and-back sections, it affords friends and family the chance to see you at multiple locations. The bike path is a welcome change to the style of many road races, and at times when you veer off the bike path and into, little neighborhood paths, you feel as if the entire suburb was closed just for you. A little more neighborhood cheering would have been great but I absolutely hand it to the volunteers, children, local cheerleaders and everyone involved with the race. Out in force and doing everything they could to make sure runners had a great time, we definitely appreciate their efforts.

This race has no where to go but up if the present group of people working on it continue in their present efforts. I hope to make the trip back to here as often as possible. You should too.

By the way, Chuck finished 4th overall in a time of 2:52:33. Pretty fantastic for a 49 year old man. Way to go Chuck and all the other wonderful runners I had the pleasure of meeting this past weekend!

This sounds like a really nice marathon. I'm glad you had a good race despite feeling pretty tired early on. That happens when you race all the time! ;) Rest up, buddy.

You've earned your rest and then some hun! As always, nice to see you commend those who put so much into putting on an event. Sounds like a great race to run. Congrats on NOT running a 3:08 ;) and on still posting a phenomenal effort and finish time despite lots of travel and wear.

Great report, Dane. You ever think of maybe taking a week off? :)

Out of curiosity, did you race in brooks defyence? Just happened to notice what looked like the electric green from them in one of the pics.

Dane, I am running the Santa Clarita Marathon next week partially because of this Report! I was interested in this race but had lots of doubts because of the size of it. Reading your Recap answered a lot of the questions I had. Thanks!

Glad you enjoyed the read. I hope you will let the organizers know exactly what you told me.