Recently I had the pleasure to be invited to a Yoga for Athletes class taught by Kimberly Fowler. I say "pleasure" as I can openly admit my trepidation for the "y" word and how I did not think I would necessarily enjoy the session. 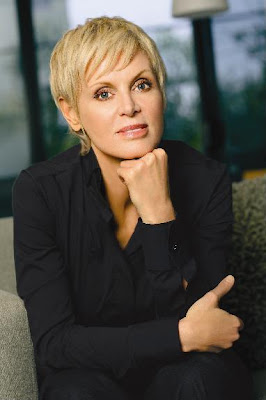 Before I get there, a little about Ms. Fowler.

First, she is a fellow graduate of both law school and the corporate world. Like runners who can share a knowing nod about certain things without so much as a word exchanged, law school grads share a kindred spirit. So right off the bat we had a certain connection.

Second, if "surviving" law school was not enough, Fowler literally survived something worse than Torts or Mergers and Acquisitions when she was diagnosed with an inoperable brain tumor in her second year of school. Determined to get well, she incorporated yoga into her treatment plan and recovery. Cancer-free twenty plus years later, Fowler credits her yoga practice with helping her reach deep within to find the strength she needed to save her life.

Third, Kimberly is both a marathoner and a triathlete. And to be honest, if the first two did not sell me on giving this whole yoga thing a shot, this part of her life surely did.

That said, Yoga for Athletes is a sixty-minute class which has the tagline of “No Chanting. No Granola. No Sanskrit.” Apparently, changes have been made in the yoga world in the past umpteen years which makes this not all that surprising to those in the know, but the fact remains that for many of us, including myself, yoga always seemed to be too frou-frou for me. Not more than a few minutes into the class I saw this was not your father's yoga class. As part of an overall studio called "YAS" (Yoga and Spinning), Kimberly proclaims "I am not your guru. You are." 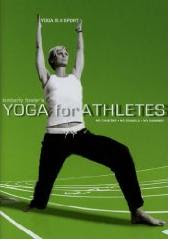 Fowler's style is very straightforward, and the sequence she taught seemed both suitable for intermediate practitioners and those with a higher skill-level (it was my first yoga class ever and it appeared there were all skill levels there as well.) She had spectacular pacing and I never felt rushed or that I was holding a pose for too long. Fluid movements moved one pose to the next, always centering in a pose which gave me a moment to rest and wipe sweat off of my body. At one point, when Kimberly was helping to align my position she actually asked "Would you care for another towel?" Yes, Kimberly, I am a sweater. Be proud.


After the hour was done, I was sold. I am now the proud owner of the Yoga for Athletes DVD which more or less mirrors the class I took. I laughed when the students in the DVD all had matching Yoga for Athletes outfits but only because that is what the class itself looked like. People who were in the class were proudly wearing their YAS apparel. Apparently, Kimberly has struck a chord with many people. 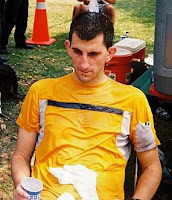 And may I add, forget about bars for meeting fit, attractive people. While I still think that libraries would be the best place to meet someone you would be most attracted to, I think those in the Dewey Decimal System Fanclub frown upon lightly-clad sweaty people in such close proximity.

So, for both the health of your body and your lovelife, go to a YAS class asap.
Posted by Dane at 2:04 PM

Awesome! Froo-Froo Free Yoga is Where It's At For Runners! Every time I PR in a race, I credit that strength Yoga has given me to dig deep within. Try Bikram Yoga sometime if you really want to workout!

It was so great to meet you at the YAS studio last week. I hope you will be speaking at Kimberly's studio soon!

When I met you at the Pasadena Marathon expo and you told me about the YAS studio the next day, I was upset I couldn't make it because of the Marathon. Then they canceled the Marathon!

I cannot wait to give this sanskrit-free Yoga a try!

What a great combination! Spinning and yoga are two of my favorite non-running activities, and both can kick my behind. I wish I had a great yoga instructor like Kimberly. Maybe I'll try the dvd that you are using. I have to say, I never thought you'd be a yoga convert! Enjoy, and good luck to Kimberly for continued success!

Sounds like I have a great DVD to add to my Christmas wish list. Thanks for the review!