If you have read my book, See Dane Run, you will note that I haven't always been a runner. In fact, I did not start until my junior year of high school and even then it was...well...a rather unique reason why I did. There is also an explanation for this haircut as well but we will just let that one go for now. 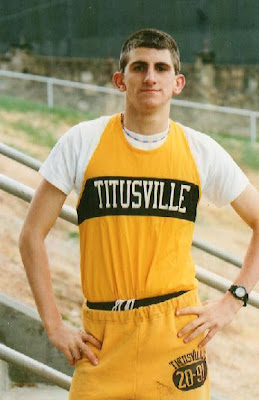 However, one of the reasons I even stuck with the sport in the first place was because of my track coach Brent Henderson. Also our chemistry teacher in high school, Brent was down-to-earth, a great guy and one heckuva a runner. He could then (and probably still could today) kick my butt in just about every distance. It is one thing to have a guy know what to teach you as a coach, it is another to know that he could do the workout right next to you if you challenged him.

Well, it was with great pleasure that I read today that Brent coached his 100th victory at Titusville as the Head Track Coach. Ever humble and self-effacing, Brent deflects the praise and doesn't take nearly as much credit as he should. Sure he has had some good athletes (and a few great ones - I was not in this category) but to mold them into such a team, year after year, takes a great coach.

As an aside, I will stop and tell anyone anywhere who wishes to listen about my senior year of track. I will do so not because of how well I did (I only had moderate success and did not reach the levels I was hoping to reach) but because of what a freaking juggernaut that team was. Going 10-0 with our closest score being 101-49, watching this team, even as a member of it, was like being a spectator to greatness. My favorite stat ever from that year revolves around the distance team. Bear with me one second:

And I tell you that to tell you one of the greatest pleasure of being part of that distance team was doing it for Coach Henderson. Brent was one of the integral persons involved in helping me create the original Drake Well Marathon back in 2006. I remember reminiscing with him about our team way back in 1994. I vividly recall Brent telling me: "There are few times in your coaching career where you just know you have something special in front of you and it is your job to just not mess it up."

I too Remember that Season! It was my first seaon on the team and I barely lettered but our team was AWESOME! Coach Henderson is an amazing coach. He would challenge you when you thought you could not give anymore. Good times and Great memories!

Thanks for the post, Dane. That was indeed a great season... but I guess I didn't know quite how great - thanks for adding the layer of stats. From time to time I still think about the District 10 meet and our 4x800 relay. And yes... I know, I know... I need to order my book to read all about it for myself!

As someone else pointed out, what is even more amazing is that with those 100 wins, he only has NINE losses!