I had just barely cooled my heals from running the Salt Lake City Marathon before I hopped into a car and tried to squeeze a quick trip to Boise, Idaho in before heading out to the Kentucky Derby Marathon this weekend. Why was I going to Boise? Well, sit back and I will tell you!

A few weeks ago, I was contacted by a runner in Boise named Monica Runningwolf. Seriously. Isn't that the coolest name for a runner you have ever heard? And Monica is a heckuva runner as well. An owner of a 2:49 marathon PR (in something like her 3rd marathon ever) she is also one of the nicest people I have met. Monica also started her own running and walking club in Boise called TEAM APEX. Their motto is that they are "dedicated to walking, wogging, jogging, running, and racing; for health, recreation, & competition; at any age or ability, from the novice to the elite."

Well, Monica was hoping I could come and present to some of her runners in Boise and help inspire them to taking on what may seem to be the impossible. After a few discussions about logistics and finding a day I could even make it up to Boise, we set a date for me to come. Now we needed a locale.

Enter Mike Shuman. A Boise local who seems to be giving his time an energy to just about every event in Idaho, Mike owns and operates a running store called "Shu's".

He can often be seen, down on his hands and knees making sure that every costumer has the exact fit for their running shoe needs. Well, Monica approached "Shu" about having me speak at his store and the next thing I know, I have two speeches and runs planned at Shu's just 36 hours after I finished the SLC Marathon.

After a slight delay in getting out of SLC (flat tires, 80 miles from home on a Sunday in Utah do not allow for speedy fixes) I arrived in Boise. I had always wanted to go to Boise and check out the "Smurf Turf" of the Boise State Broncos and now I had my chance. Monica took me out for a run to get the rust out of my legs from the marathon and before I knew it we were in the shadow of Bronco Stadium. We ran a lap around the inside of this unique venue and I teased Monica about her alma mater's less-impressive-than-Penn-State's stadium. "Cute," I said. "Do they share with this the junior high?" (Come now, with an attendance record nearly 1/3 of PSU's, I had to rib her some!)

Soon we were at Shu's and I was prepping for my first talk. An enthusiastic group of runners and customers alike listened while I let loose with anecdotes and stories surround Fiddy2. A lengthy (and well-loved by me!) Q&A section followed. I would much rather answer the questions of my listeners than drone on, as I know I am able to get to the real heart of what they want to know. And talk both myself and those in attendance did. Time flew by and soon we were shutting down the store (my apologies to Shu for keeping everyone so late!)

The next day, I sat and signed books for over 2 hours as we decided to shuttle the speaking section and just go with what those there wanted - personal questions answered and books signed! I posed for plenty of pictures and was happy to get a really nice one of Monica and myself. 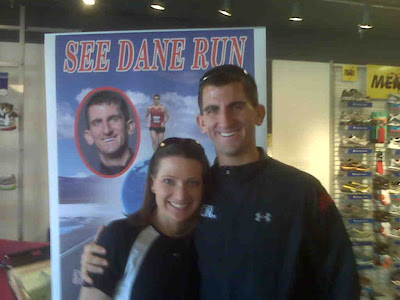 My heartfelt thanks goes out to both Shu and Monica. There is a distinct possibility that Shu and I will be working together again in just a month or so on an exciting event, so stay tuned!

As for Monica, here is one amazing runner who should really be sponsored by a plethora of outfits. while working 12 hour shifts as a nurse, she somehow still finds the time to coach other athletes, organize group runs, do massage therapy AND run a sub 2:50. My speeches were given both the day of and the day after the Boston Marathon where American runners took the third place in both male and female races. Runners across America were very excited for the performances of Ryan Hall and Sara Goucher. An American resurgence in running really seems to be happening after many dark years at the top level of the sport. In order for this sort of resurgence to continue, talent like Monica's should not be wasted. I can only imagine what she would do if she actually could concentrate on doing just one or two things instead of 20! Runners like her need the full support of the running world out there and I can only hope that this blog falls on the right eyes and helps to develop Monica's running. With a PR already faster than mine, I told her I can only hope to keep up with her in the future!

Thanks again, Boise, for opening your arms to me. I look forward to running within and around your boundaries again very soon.
Posted by Dane at 11:14 PM

Wonderful story. So nice to finally see USA running on the upswing.

Dane's talk in Boise was great! Although he is an extraordinary athlete who has accomplished so much, he is very down to earth. Like most runners, he admires runners of all ability levels. If you haven't read his book "See Dane Run," you should RUN and get a copy of it soon.

Sounds like an awesome trip!!! and 2:49 is awesome I wonder how old she is??? That is so close to the trials time!! Good Luck to her! Good Luck to you in Kentucky. I will be toeing the line the next day in the state above you with a big goal in mind.