By this I mean, I am meeting with the others involve with putting on the Drake Well Marathon in August to make sure all is running smoothly. Even in a down economy, for an essentially first year event that did not even go public until February and is nestled quietly a 2 hour drive from the nearest major airport, numbers are already filling for the Drake Well Marathon. And while my mind is definitely on its success, the next few days will be spent putting considerable effort into the Pittsburgh Marathon to be run on May 3rd.

The Pittsburgh Marathon is back after a 6 year hiatus and it can easily be said it is back in full force. Once one of the more well-renowned races in the United States, the marathon went under when it lost its title sponsor in 2003. Picked up again by Dick’s Sporting Goods, a Pittsburgh fixture for years, the Marathon not only sold out once, but did so again when the organizers opened its registration to appease a huge public demand. Now bursting at its seams with runners, the Pittsburgh Marathon is ready to rock again. And I am proud to be part of its renaissance.

This Sunday I will be starting in a relatively odd place. Not odd because of the city but actually the placement of my body when the gun fires to start a race. I will be last. Dead last. But I won’t be staying there long.

I was approached by the Pittsburgh Marathon immediately after finishing the Baltimore Marathon last October. 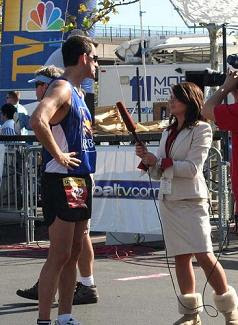 Having seen me accomplish my Charity Chaser feat where I passed all but 99 of ~ 6,000 runners to earn $2.00 per passed runner for the local United Way, the Pittsburgh Marathon wished to bring me in to bring a little special something to their own race. I think they just liked the video. ;)

A few months later, everything was in place and I once again had a wonderful organization which would benefit from my legs. This time my legs would be earning money for the Pittsburgh Promise.

There is no better person to describe what the Pittsburgh Promise does than Marsha Dugan Kolbe who is the Development Manager for this great organization. In our talks she provided me with some of the following information to better describe what exactly I will be running for:

The Pittsburgh Promise serves to inspire and motivate Pittsburgh Public Schools students to “Dream Big” and “Work Hard” in order to improve the prospects for their future. The program developed when a group of forward-looking thinkers in the community came together to address a challenge. The challenge was how to preserve the strengths of our city at the core of our region, and how to preserve the school district that is essential to the survival of the city.

It is the hope and commitment of The Pittsburgh Promise that, as a result of this effort, our region will flourish, our city will grow, our public schools will be made excellent, and our young people will move into a future that is full of promise.”

Once again, as the Charity Chaser, the amount earned will be directly tied to how many people I pass. Even with this being my 4th marathon in 3 weeks, and with the tough day I had in Louisville just 48 hours behind me, I plan to exceed all expectations.

If you are interested in helping the Pittsburgh Promise reach its goals, please contact Marsha here:
marsha@pittsburghpromise.org.

She would love to hear from you. Otherwise, I hope to be passing you in the Steel City's Streets this upcoming weekend! 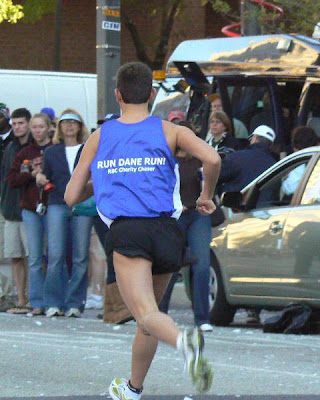 What an awesome cause! Can't wait to hear all about it.

Bummer! I just got back from Pittsburgh today! Too bad our times didn't coincide! I hope it goes well!

Good for you! I am actually looking forward to watching you pass me!